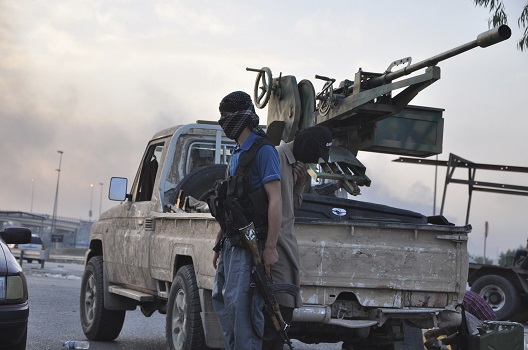 Photos depicting militants from the Islamic State of Iraq and Syria (ISIS) driving US-made armored vehicles across the Iraqi border into the Syrian province of Deir Ezzor could prove that the porous border between Iraq and Syria is now an open road for ISIS fighters hoping to establish a Sunni caliphate in the region.

Effectively the final step in fusing the two offensives into one, the financial and strategic spoils of ISIS’s capture of Mosul and Tikrit will provide a crucial boost to the group’s Syria-based fighters, who—even after multiple offenses and increasingly violent ruling tactics—have been unable to establish control of the country’s east.

Watching the group march swiftly and decisively with almost no interference from Mosul to Tikrit has been a surprise for those of us who have watched it struggle to find its footing in Syria since it first emerged as a power there early last year.

ISIS took the city of Raqqa from a fragmented and disorganized Free Syrian Army in the spring of 2013, establishing it as a de facto home base from which to launch both a military campaign for control of eastern Syria and an extremely conservative interpretation of sharia.

The group was surprised by the resistance it met, first by citizens who sided with archrival Jabhat al-Nusra, then from other opposition groups themselves, who engaged in a bloody battle earlier this year to drive ISIS out of northern provinces, largely containing them to Raqqa.

Weapons—including helicopters, tanks and Humvees—taken from Iraqi Army positions in Mosul and Tikrit will likely be sent back to Syria, along with money looted from banks and other sources. The first order of business will likely be the group’s ongoing operation in Deir Ezzor, which has intensified in recent weeks as it struggles to unseat Nusra, which is largely, through its control of local Sharia Councils, in charge of the province’s oil fields.

The second priority will be to push fighters further into the northern part of country, namely Aleppo and Idlib provinces, where they once operated but from which they were expelled by other rebel factions during a rash of infighting earlier this year.

Since late March, Deir Ezzor has seen relentless fighting between ISIS and their main rivals for supremacy in eastern Syria, the al-Qaeda-linked Jabhat al-Nusra. Control of the sprawling oil fields in the resource-rich province is a top priority for both groups; in April, the Carnegie Endowment estimated that Syrian oil sales, much of them from the province, are still hitting up to $50 million per month. Some of the oil from Deir Ezzor is smuggled to markets in Aleppo, implying that it transits through ISIS-controlled territory in Raqqa.

Since its emergence in Syria in 2012, ISIS has been moving fighters, weapons and goods across the Iraq-Syria border. Between Hassakeh province, on the Syrian side, and Nineveh in Iraq, it has effectively dominated land routes since last summer.

North of Deir Ezzor, the border has been porous for some time, and analysts say that ISIS fighters have used it with impunity, traveling between group bases in Iraq and Syria. Should ISIS use the spoils from Mosul to finally hold Deir Ezzor, they will have opened up a veritable highway for which to transport goods, weapons and manpower without any trouble.

For ISIS, the fusing of controlled territory from Deir Ezzor to Mosul is a major step towards its stated goal of creating a unified Sunni caliphate in the region.

The organization, now considered more dangerous than al-Qaeda by many Western officials, is run by Abu Bakr al-Baghdadi, a merchant’s son regarded as the ideological heir to late al-Qaeda leader Osama bin Laden. They are well funded and better organized than the Islamic Front, Nusra, and other extremist groups.

But in Syria, ISIS has struggled in recent campaigns to expand the area it controls.

It faltered its bid to wrest control of terrain from Jabhat al-Nusra and other rebel groups, and its attempts to implement an ultra-conservative form of religious law has been met with resistance from Syrian civilians.

Women are now forced to wear head-to-toe Islamic dress when out in public, while cigarettes and Western products like Coca-Cola have largely been banned. Earlier this year, civilians in Raqqa began to protest after the reported hangings of Syrian journalists and activists, accused of criticizing ISIS rule.

There is also the question of conflicting ideology. While the main goal of Nusra and the Islamic Front is still to unseat Syrian President Bashar al-Assad, ISIS’s motive is to create its own separate caliphate. Along with increasingly violent tactics both on and off the battlefield, this has made them increasingly unpopular with other rebels.

In January, ISIS emerged victorious from clashes against opposition forces led by Nusra and the Islamic Front, keeping control of Raqqa city. But the infighting forced it out of northern provinces and slowed its advance into Deir Ezzor.

The group has performed well in Syria before, controlling swaths of Idlib and Aleppo before facing backlash from rebel forces and being forced to retreat. Some Syria watchers caution that though general destabilization has swung momentum in ISIS’s favor, it does not mean the drive will stick.

For now, the group is claiming that it is already reaping the rewards of this week’s Iraq advance. Their Twitter accounts show what they claim are US tanks and helicopters from Iraq being brought to Deir Ezzor for inspection by their Syrian leaders.

Gains like these could push the Syrian army into action against ISIS. Iran, Assad’s most important regional ally, is insisting that he take action. Iran, a Shiite power, and ISIS, a Sunni insurgency, have rival goals in the power battle of Syria’s war. Already, there are signs the regime is beginning to take on ISIS, attacking the group’s strongholds in Raqqa and Hassakah earlier this week.

Karen Leigh is the managing editor of News Deeply. A version of this post first appeared on SyriaDeeply.org.

Image: Fighters of the Islamic State of Iraq and the Levant (ISIL) stand guard at a checkpoint in the northern Iraq city of Mosul, June 11, 2014. Since Tuesday, black clad ISIL fighters have seized Iraq's second biggest city Mosul and Tikrit, home town of former dictator Saddam Hussein, as well as other towns and cities north of Baghdad. They continued their lightning advance on Thursday, moving into towns just an hour's drive from the capital. Picture taken June 11, 2014. (Photo: REUTERS)