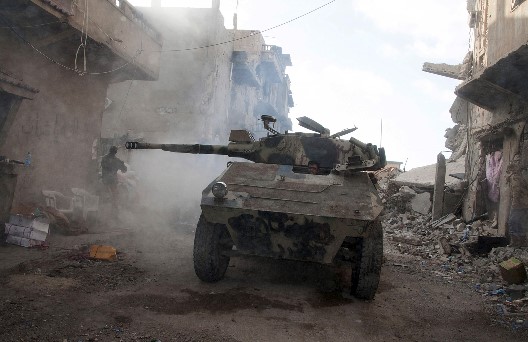 Members of the Libyan pro-government forces, backed by the locals, travel in an armoured vehicle during clashes in the streets with the Shura Council of Libyan Revolutionaries, an alliance of former anti-Gaddafi rebels who have joined forces with Islamist group Ansar al-Sharia, in Benghazi April 1, 2015. (Reuters)

UN Special Envoy to Libya Bernardino Leon is still trying to herd the scattered Libyan cats of all political shades around the table in Morocco. Leon hopes to negotiate a peace treaty of sorts, put an end to the fighting, and establish a unity government that can keep the country together and enable it to serve as a credible member of the international community.

We have all been there before, of course, with as many as six temporary and transitional prime ministers and governments since 2011—two of which were elected but did not take office. The problem, however, has not so much surrounded forming a government, but rather the ability of any government thus far to actually rule and exercise power with a monopoly on the use of force in a country with hundreds of militias, which form temporary and transient alliances only to turn around and fight each other.

In this circus, no one is holding their breath that the UN sponsored meetings in Morocco will actually produce anything more than something that the UN can claim as a “success” before the cameras.

This pessimism is due in large part to the following missing key ingredients in the process:

Given this grim picture and the weak foundation for any serious peace negotiations, Libya seems headed for a variation of one or combination of the following scenarios:

Scenario 1: Rivals agree to form a unity government in which each faction wins a number of comfortable positions, but remains at the mercy of armed militias somehow labeled a National Army. This scenario risks a return to a government beholden to armed groups, compromising its sovereignty, integrity, and credibility. It would result in a ticking time bomb that would ignite next cycle of violence once competing militias disagree on and start fighting all over again.

Scenario 2: Put Libya under international guardianship—with at least minimal consent from the House—using Arab and African peacekeeping forces with logistical, aerial, and naval support from NATO to secure the major cities, calm the tense environment, and start a new UN-sponsored political process to determine a future roadmap. In essence, this scenario repeats the same historical experience of post WWII Libya, when allies provided an armed presence and the United Nations sent then-High Commissioner for Libya Adriaan Pelt to oversee a political process that ended in Libya’s independence and the 1951 constitution.

Scenario 3: Subcontract Libya to the Arab world and let willing and able Arab countries—particularly neighboring states such as Egypt and Algeria—intervene and take ownership of the problem directly. This would be akin to what happened in the Lebanese civil war when Syria was given the green light to enter Lebanon and impose some sort of an occupation, operating from behind the curtain of a weak and willing local government.

Scenario 4: Allow the slow disintegration of Libya as a state (a la Somalia) and try to contain, isolate, and close off Libya. This scenario would require withdrawing international recognition of any government, freezing Libya’s assets and reserves around the world, blockading oil terminals to deny warring groups any revenues, and relying on the usual counterterrorism measures (targeted drones strikes, etc) to hit terrorist groups as needed. This scenario would deprive terrorist groups and warring factions from funds. Ultimately, the different factions would have to come back to the international community begging for a negotiated settlement and reengagement, or suffer a tortured existence.

Whatever scenario (or a combination of scenarios with different variations) may prevail over the coming few months and years, the cycle of revenge, conflict, and failures over the past four years have created a far more challenging and complex environment among the once united Libyan population. Trying to overcome a deep and still widening chasm of mistrust and suspicion among the different tribal, regional, political, and ideological groups now loosely described as the “Libyan people” will continue to be the most difficult challenge facing the country for generations to come.

Hafed Al Ghwell is a Senior Nonresident Fellow with the Rafik Hariri Centre at the Atlantic Council in Washington DC, a Senior Advisor with the political risk advisory group Oxford Analytica, and former Adviser to the Dean of the Board of Executive Directors of the World Bank Group. Find him on Twitter @HafedAlGhwell