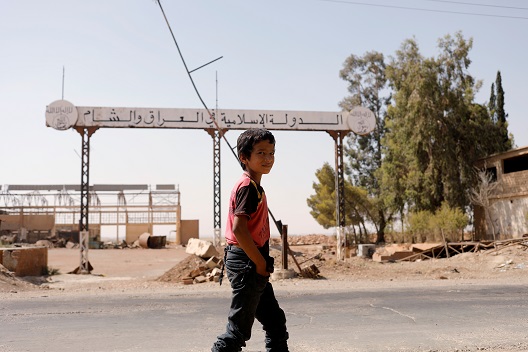 Below are remarks by Ambassador Frederic C. Hof at the NATO Parliamentary Forum at the National Defense University on Dec. 11, 2017 that touched upon the evolving US approach to Syria and Iraq.

I’ve been asked to discuss the evolving US approach to Iraq and Syria. I will try to do so as accurately and as briefly as possible. Brevity will not be a problem. Accuracy may be something else. I’ve been out of government for five years, and although I stay in touch with former colleagues and try to offer ideas on objectives and strategy, I do not purport to know what the commander-in-chief has decided on key issues affecting Syria and Iraq.

What I think I do know is that the Trump administration views Iraq and Syria largely through the prism of Iran’s armed intervention. Until recently this prism was dominated by the Islamic State and its self-proclaimed caliphate. But with the caliphate’s cross-border dimensions now reduced by some 95 percent, the focus is on Iran. I would think the administration would articulate its overall Iraq-Syria national security objective in terms of neutralizing Iran’s political penetration and blocking its land bridge from Iraq through Syria to its principal asset in the Arab world: Hezbollah in Lebanon.

The key questions, obviously, come down to strategy and implementation. Clearly there are no short-term fixes.

Iran’s influence in Iraq has increased steadily since 2003, and it took full advantage of the 2014 invasion of Iraq by the Islamic state. In Syria, Iran far outstrips Russia as the main external supporter of the Assad regime, which now seems to be secure politically. Tehran sees the preservation of Assad as essential to the health and well-being of Hezbollah. So: how, if at all, might the Trump administration try, over time, to neutralize or minimize Iranian influence in both places?

In the Atlantic Council we have just launched a four-year Iraq initiative that follows-up on our Task Force for the Future of Iraq, which was led by Ambassador Ryan Crocker. That task force defined the US objective as “an independent, stable, and prosperous Iraq: one at peace within its borders and with its neighbors, reflecting legitimate and effective governance, and strongly inclined to cooperate closely with the United States in the Middle East.” I doubt that the Trump administration would quarrel with this objective.

The task force suggested that US strategy rest on five points:

My sense is that the Trump administration is moving in a direction consistent with these recommendations. But always keep in mind Churchill’s description of Mussolini: big appetite, bad teeth. A long-term, multifaceted commitment to Iraq—even with active partners—will be a diplomatic heavy lift. Who will do it? No doubt secretary of defense Mattis thinks of Iraq when he calls for strengthening all aspects—not just military—of American power projection.

In Syria, the Trump administration inherited a policy catastrophe. Eager to avoid alienating Iran for the sake of the nuclear agreement, the Obama administration decided against trying to protect Syrian civilians from the mass homicide, collective punishment campaign of the Assad regime. Assad’s war on civilians plus erased redlines produced multiple disasters in Syria and beyond. The most prominent include: the premier humanitarian abomination of the century; the introduction into Syria of the Islamic State and other sectarian primitives; a politically destabilizing migrant crisis in Europe; Russian militarism in Syria and beyond; a serious loss of American and European credibility; and a moribund Syrian state falling mainly into the hands of Iran.

Political illegitimacy—derived from open contempt for the consent of the governed—opened both Iraq and Syria to penetration by Sunni and Shia sectarian actors. In Iraq, since September 2014, the US has had the advantage of working with a decent prime minister and some professional military units. In Syria, where the murderous behavior of a government has opened opportunities for extremism, the ground force battling the caliphate has been a Kurdish-dominated militia, much to the displeasure of Turkey. With the caliphate nearly gone, the immediate question facing Washington is what to do with the Syrian territory east of the Euphrates river liberated from the fake caliph.

It seems that the administration wants to maintain the Euphrates river as the deconfliction line between the US-supported Syrian Democratic Forces and the Assad regime, which itself relies very heavily on Iranian-led militia forces. American officials have recently said they are in no hurry to remove American ground force advisors from eastern Syria. Obviously, Washington sees that the replacement of the Islamic State by Assad regime forces and Iranian-led militiamen would leave eastern Syria vulnerable to the regeneration of Islamist extremism of the Sunni variety while facilitating Iran’s regional objectives.

Indeed, the administration may be seeing eastern Syria in a context broader than the post-combat stabilization of an area free of Assad and Iran. The Trump administration has continued the practice of its predecessor of condemning Assad regime atrocities and calling for negotiated political transition that could get Syria and its neighbors past Assad, his family, and his entourage. To this end, the administration has stated that it supports the UN-supervised peace talks in Geneva. Perhaps it calculates that if eastern Syria and its oil resources can be denied to the Assad regime, the US might actually acquire some leverage beyond the verbiage of calling on Assad to step aside.

The administration has made it clear that it opposes a full-scale reconstruction program for Syria as long as the Syrian government is in the hands of the Assad family and entourage. The Middle East Center I direct has just issued a report setting forth a reconstruction strategy that would focus on areas not controlled by the regime. It’s a complex and daunting challenge.

Finally: I suspect the Trump administration is learning daily about the limits of expecting Russia to be helpful in Syria. The days of administration officials assuring outsiders that Russia and Iran have a long history of animosity and that Russia wants reconstruction badly enough to move past Assad are over. Russian aircraft are recklessly penetrating the airspace of Syria east of the Euphrates, endangering coalition aircraft and partner forces on the ground. I fear this will lead to a deadly incident.

What is clear is that president Putin is quite comfortable with Iran running Syria through Assad, so long as he can claim—for domestic political purposes—that he has beaten the US in Syria. Today’s announcement by Putin in Syria of a forthcoming Russian military withdrawal from Syria aims to convince Russians of two things in advance of the March 2018 first round of Russian presidential elections: that Russia has been victorious, and Russia will avoid a potential quagmire. I do not expect to see significant Russian military drawdowns from Syria anytime soon: at least not until Assad controls the whole country, which will be problematical.

The establishment of political legitimacy in Iraq and Syria will be a generational struggle. Iraqis and Syrians are the ones ultimately responsible for the outcome. President Trump has articulated his opposition to American “nation-building.” I suspect, however, he is internalizing the need for a long-term commitment by the US and its allies to Iraq and Syria. This, I think, is the most significant aspect of the evolving approach of Washington to these two countries.

Image: Photo: A boy walks past a sign which reads 'Islamic State in Iraq and Syria' as fighting continues between the Syrian Democratic Forces and Islamic State militants in Raqqa, Syria, August 20, 2017. REUTERS/Zohra Bensemra