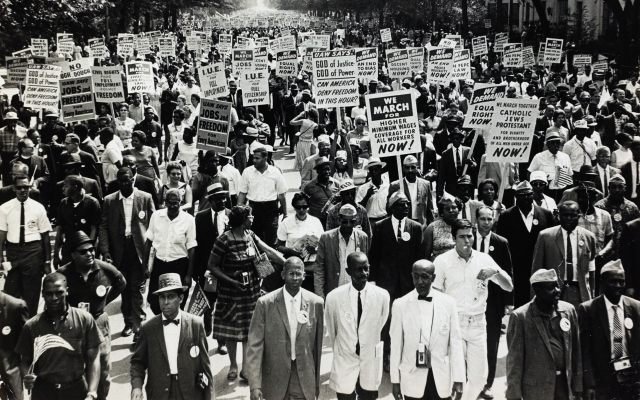 It is a striking coincidence that the first anniversary of Egypt’s January 25 Revolution – which unseated longtime dictator Hosni Mubarak – will take place only days after the United States commemorates civil rights icon, Martin Luther King, Jr.

On January 16, I joined friends and toured the newly erected monument honoring King, encircled by a ring showcasing his most memorable words.   King’s masterful rhetoric, and martyrdom for the causes of justice and equality, not only spurred imagery of the American Civil Rights struggle – but the still ongoing movements taking place in Egypt and throughout the Arab World.

“A riot is the language of the unheard,” King revealed.  Laws and policies that stripped their human and civil rights silenced Egyptians, much like marginalized and dehumanized African Americans five decades ago.  The rule of law, for everyday Egyptians and Africans Americans, afforded no due process or relief, while the very government entrusted with the duty to protect sought to only persecute and prosecute.

These were only the baseline parallels that meshed together the Arab Spring with the Civil Rights narrative, with the language of King, Malcolm X, and other luminaries offering the rhetorical stitching.  Unheard individuals assembled in Tahrir Square, a year ago, demanding the very same dignity and humanity African Americans convened on the Washington Mall forty-nine years ago calling for.  The spirit of the two struggles is one in the same.

Revolutions were the lone language – or outlet – for Egyptians to express their opposition to state-sponsored oppression.  Arms and intimidation responded to the unearthed courage everyday Egyptians displayed on the streets, harkening memories of police dogs and batons unleashed on SCLC activists and students.

The diversity of both movements, however, ranks as the most salient parallel.  The Civil Rights Movement, while largely an African American experience, also encompassed rights-loving Americans of every faith, hue and political persuasion.  Muslims were key actors in the Movement, and the contribution of Jewish Americans – including Freedom Summer activists Andrew Goodman and Michael Shwerner – were seminal.  The universal causes of justice and equality galvanized every citizen, and divides along religious, political, economic and sectarian lines were – at least momentarily – bridged.

Tahrir Square, and the burgeoning revolution that propelled it into the new national symbol of Egypt, embodied that integrative spirit of the Civil Rights Movement.  Copts and Muslims protected one another during their respective prayer times, and members of the Brotherhood, secular students, nationals in the Diaspora, and hyper-indigent protestors were all galvanized beneath one banner and unified cause.

The reality that more works needs to be done – in both America and Egypt – is the common thread tying both struggles.  Both de jure and de facto racism are hardly extinguished in America, with incarceration rates of Africans American men disproportionally high, affirmative action programs systematically eliminated, and public education in America’s inner-cities growing more inadequate.

A year after Egyptians took to the streets to reclaim self-determination, the Supreme Council of the Armed Forces (SCAF) is crushing dissent, jailing activists without due process, and perpetuating many of the same human rights violations committed under Mubarak.

King, like the nameless Egyptian martyrs who have no statues or holidays commemorating their sacrifice, fought for far more than their own liberation, or the freedom of their people.  Rather, they persevered to achieve those elusive virtues – the right to life, liberty, and the pursuit of happiness – enshrined in our Constitution and human rights conventions.

These virtues are the ties that bind the Civil Rights Movement and the Arab Spring, and learning more about the former will enrich and enhance our understanding of the latter.

Khaled Beydoun is a Washington, DC-based attorney and member of the Egyptian American Rule of Law Association (EARLA). Follow Khaled @khaledbey on Twitter.  The views expressed herein are solely those of the author.