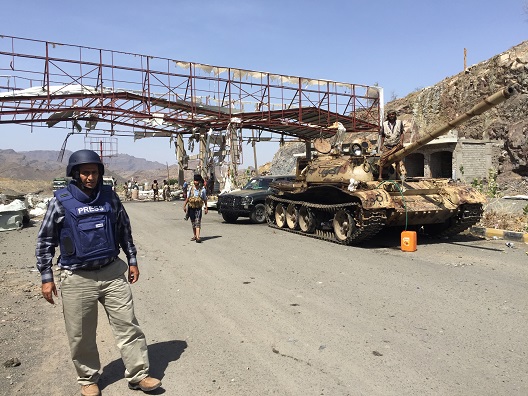 With one hand holding the hose for hookah and the other his beeping cell phone, a conversation with Mohammed al-Qadhi is constantly interrupted. He swiftly takes a glance at his cell phone and says, “Excuse me, it’s breaking news I must send this to my editors.” He grabs his phone and he begins tapping.

As one of Yemen’s veteran journalists and rare war correspondents, al-Qadhi has a lot on his plate. Despite spending a short vacation in Cairo, he is busy following the news, receiving calls and updates from his contacts in Yemen, and reporting to his editors at UAE-based Sky News Arabia.

MENASource met with al-Qadhi last month at a cafe in Cairo only days after he left war-torn Yemen. “It’s been a tough time. I needed a short break from the violence, even though, as you see, I’m still working from here,” he admits, chuckling.

“I have covered major events in Yemen’s modern history over the past twenty years and yet I believe that this war has been the most challenging conflict to cover. I’ve had some traumatic experiences while reporting over the past four years.”

Al-Qadhi has been covering the conflict, travelling to different parts of Yemen such as Sana’a and Aden, with more extensive coverage of the bloody fighting in Taiz since early 2015. In the course of the ongoing conflict, al-Qadhi has cheated death several times, survived a serious eye injury while reporting on the frontlines, faced death threats, and was kidnapped twice.

“Of all the war-torn places I’ve been to, I think Taiz has been the most challenging to cover because of the extreme difficulty of accessing it, the immense scale of destruction, unbearable humanitarian plight, and how one’s life there is constantly at risk,” says al-Qadhi.

Al-Qadhi standing near a tank with government forces in an air defense basecamp which was seized by the Houthis. The tank was broken after a landmine planted by Houthis went off. Al-Qadhi escaped after shells fired by Houthis. November 22, 2016.

Al-Qadhi’s observations betray vast experience in conflict zones. He began working as a journalist in 1998 with Yemen’s only English-speaking newspaper back then, The Yemen Times, where he did some first-hand reporting on some of Yemen’s most turbulent times. He has also worked with several international media organizations such as the Washington Post, The Associated Press, France24, The National, and he contributed to BBC and Aljazeera English, until he officially joined Sky News Arabia in 2012. He extensively covered the war between the Yemeni government forces and Houthi rebel group from 2004 until 2010, and has been covering the Southern Secessionist Movement (al-Hirak al-Januby) in South Yemen since it began in 2007.

“Despite the constraints against freedom of press during all those years, a journalist used to be able to find his or her way and report with relative safety,” reflects al-Qadhi. “Today, however, journalists are systematically targeted by all warring sides. In Taiz in particular, Houthis think if a journalist gets his or her camera out to shoot its as if they’re shooting with a weapon.”

In Taiz, the conflict has devastated all aspects of life in the city, including the press. The city has been a scene of never-ending brutal battles since 2015 between two sides: the national army forces under the control of the government of President Hadi and Popular Resistance (a local group affiliated with the Yemeni government), and the Houthis.

Al-Qadhi sneaking through a hole made on the wall of al-Hakimi school in al-Moroor zone in Taiz. It was difficult to move into the frontline there without having to go through such holes and allies to avoid Houthi snipers. September 19, 2015.

While sneaking through holes in houses to avoid being seen by Houthi snipers in al-Hasib zone, in Taiz city. Al-Qadhi reported on the scale damage in the area. Two days after this, photojournalist Ahmed al-Shibani was shot dead in the same area he passed through. February 14, 2016.

Nonetheless, al-Qadhi explains that the Houthis are not the only threat to media workers in Yemen and that it is rather the overall lawlessness and chaos in the country which puts everyone at risk. “While I am not dismissing how dangerous it was for me to dodge Houthi snipers a number of times, I also believe it was very dangerous when I was kidnapped twice by armed tribesmen and another group of gunmen,” recalls al-Qadhi, “once in Amran province during the Houthis’ takeover of Sana’a and the other time in Taiz when gunmen were pointing their AK47 guns at my head. I thought I would be executed right there.”

Al-Qadhi believes that Taiz could be the most dangerous place for journalists in Yemen at the moment. He has lost many colleagues who were killed by Houthi snipers or shelling. Hostilities are increasing as the security deterioration continues in Taiz and law and order are very much absent due to the plethora of armed groups and their unclear allegiances.

In some of al-Qadhi’s live reporting from the frontlines, the sound of guns and shelling can be heard—on several occasions, sniper bullets or rockets have interrupted his live reports.

“Now, when I watch my video reports while I was under shelling and sniper bullets, I realize how dangerous it was,” al-Qadhi says, “when I was there, I didn’t fully understand the danger I was exposed to. Only until I see it later on the screen I understand the kind of danger I was in.”

Besides reporting from the frontlines, al-Qadhi has done numerous reports in Taiz on the dire humanitarian situation as a result of the Houthi siege. “It was crucial to cover the impact of the blockade on Taiz, since my crew and I went through what the people in the city went, and still go, through,” Al-Qadhi tells MENASource.

“I have witnessed how patients faint and die helplessly at the door of hospitals that lack the needed medicine and staff. A tragic situation!”

Al-Qadhi has had to climb high mountains in Talwooq area with the locals because it was the only safe place away from Houthi snipers while smuggling food and medicine to the city. Al-Qadhi recalls how he saw men, women, and children carry heavy commodities on their shoulders, and with camel and donkeys up on the mountain to reach the city. “That was one of the telling signs of the tragedy in Taiz,” al-Qadhi describes.

Al-Qadhi chatting with a villager from Talouk mountainous area in Sabir, southern Taiz as he climbs with his donkey carrying bags of flour being smuggled into the city of Taiz under the siege of the Houthis. December 27, 2015.

War reporting is critical, in al-Qadhi’s view, despite all the risks. “As journalists, it’s our job to convey the voice of people trapped in such conflicts,” al-Qadhi says, “I have seen how some of my reporting has led philanthropists to send help to try and alleviate the suffering of people in Taiz. “That makes all the risks worthwhile.”