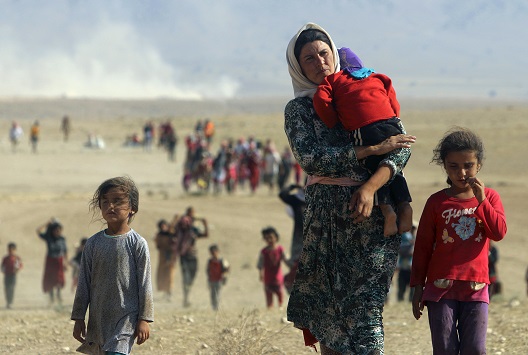 The approach of International Women’s Day on March 8 prompts some reflection not only on the difficulties women face in the Middle East, but also their changing roles in conflict and religion. As religious extremism dominates the headlines, subtle shifts in how women engage with this phenomenon begin to emerge. This participation has produced sometimes-contradictory reactions among jihadists and the larger Muslim world that calls for a reevaluation of religious and political ideology. For example, Sigolène Vinson survived the Charlie Hebdo massacre in Paris simply because of her sex, but Kayla Mueller was killed in Syria despite being a woman. What explains this discrepancy?

Until a decade or two ago, women were considered largely inviolable across the Muslim world. Remnants of pre-Islamic tribal concepts of gallantry and chivalry, integrated with Islamic mores over time, directed this mode of thought. Taking possession of a defeated enemy’s wife or daughter was sometimes considered justifiable during wartime, but in most situations, women—especially Muslim women—could expect immunity from the threat of military violence, rape, or ransom, at least theoretically under Islamic legal systems and across Islamic cultures. Muslims generally viewed women as intrinsically hallowed. Since engaging women in combat conflicts with gender ideologies that sanctified them as emblems of hearth, home, and motherhood, men mostly regarded them as off-limits in the overtly politicized realm of violent conflict. Traditional codes of conduct—a part of Islamic culture since at least the time of the first caliph in the seventh century—specifically forbade the deliberate targeting of women and children during warfare.

More recently, however, this long-standing view of women has begun to change especially among radical Islamists. From Libya to Afghanistan, jihadists have increasingly targeted women. ISIS has murdered mostly non-Muslim women in Iraq and Syria, whether foreign or local. However, Muslim women and teenagers have also suffered at the hands of ISIS. This state of affairs would have been inconceivable only a few decades ago. If radical Islamists no longer see attacks on women as strictly illicit, what does this say about changing norms among jihadists or the Muslim world at large? Is it possible that this development reveals new perceptions about women and their place in society?

The changing outlook of jihadists appears driven in part by the increasing presence of women in the ranks of their enemies, both as outspoken civilian critics and as combatants. For example, the Kurdish female fighters that ISIS faced in Kobani undermine the perception of women as fragile vessels of motherhood. These female combatants create dissonance not only with ISIS’s understanding of women, but also with ideas in the West that tend to portray Muslim women as passive victims in need of saving.

Arab and Muslim cultures actually contain a history of female combatants. Radical Islamists, to some extent, can dismiss such figures as historical anomalies. However, when confronted with the growing presence of women in traditionally male-dominated areas, something has to give. The comfortable assumption that women are altogether lacking agency in the realm of violent political conflict has slowly started to fade away.

Today, jihadists have begun to accept a role for women not only as enemy targets but also as agents within their own ranks. Whether it is the Chechen Black Widows or Palestinian female suicide bombers in Gaza and the West Bank, radical Islamist movements have encouraged women to view radicalism and violence as a form of empowerment—perhaps a kind of warped alternative to progressive feminism. The ISIS al-Khansa’ Brigade, composed of Arab but also French- or British-born women in full niqab (face veil), operate checkpoints and patrol the streets as a form of morality police. In some cases, they have been accused of acting as procuresses for ISIS-run brothels, in which lesser (or non-Muslim) women are held for the use of male fighters. The reasons behind these female jihadists’ involvement are manifold: revenge, ideology, or financial gain.

The male jihadists who recruit women fighters and send them on their missions certainly do not advocate gender equality. But something seems to have changed in their perceptions of femininity and women’s roles. While rhetorical notions of sacred virtue and motherhood still crop up in Islamist propaganda, in practical terms these concepts have taken a back seat, unveiling a more cynical and utilitarian outlook. According to some reports, Islamist theologians such as the Saudi Mohammed al-Arifi may have even legitimized the notion of sexual jihad—amounting to a temporary “marriage” that may last only a few hours. Scores of young Tunisian women have allegedly answered the call to sexual jihad in Syria. Young women from Malaysia and Europe are also said to have been recruited. The most famous case is probably that of two Austrian teenagers who joined ISIS and became jihadi brides. ISIS has accepted women from around the world into the cause with the assumption that jihadists need pious women to support them, as the wife of one of the Paris attackers allegedly says in an interview with Dar al-Islam, ISIS’s French language magazine.

A more disturbing outgrowth of the jihadists’ new outlooks on women are the blatantly predatory practices that have emerged in relation to those whom they see as enemies. Seen as an idolatrous group that purportedly worships Satan, Yazidi women have faced kidnapping and sexual enslavement by ISIS. Perversely, ISIS explained in a four-page article in its magazine Dabiq that the imprisonment and rape of these women would prevent jihadist men from being “tempted” into “illegitimate” forms of fornication. The lack of legitimized sexual slavery in the modern world, according to the article, has contributed greatly to immoral behavior.

ISIS’s willingness to target women, enslave them, and involve them in its military operations has led governments in the region toward a renewed focus on women associated with jihadists. States such as Jordan have sent a clear message to radical Islamists, indicating that women who are involved in violence will be treated no differently from other combatants. Jordan’s recent execution of Sajida al-Rishawi shows that the kingdom is willing to follow through with its threat. The Lebanese government arrested Suja al-Dulaimi, a one-time wife of ISIS leader Abu Bakr al-Baghdadi, and her new jihadist husband in December 2014. Similarly, the wife and children of prominent ISIS “emir” Abu Ali al-Shishani were arrested in Lebanon near the end of 2014. Al-Shishani, apoplectic over the arrest, called on his Sunni brethren’s sense of honor to target the Shia community and vowed to kidnap Lebanese women and children unless authorities released his family. Sunni Muslims in the larger Islamist community also criticized the detention of these women and called for the prisoners’ release.

This outrage over the detention of ISIS-affiliated women is grounded in traditional notions of female sanctity. Yet, these voices of Sunni protest fell silent when ISIS targeted non-Muslim women for kidnapping or assassination and when the organization issued guidelines encouraging the imprisonment and rape of female slaves. Muslims—particularly clerics—should address such double standards in the treatment of women. It is only one of the jihadists’ many hypocrisies that they would promote outrage over the arrest of “their” women while simultaneously targeting “other” women for assassination and slavery. As women increasingly shift to a more active role in politics and conflict, some might consider this development an expression of greater agency. The overall picture, however, suggests that these women continue to be used by men—both jihadists and those in government—to their own ends.

Rola el-Husseini is a Research Associate Professor at the Graduate Center of the City University of New York and the author of Pax Syriana: Elite Politics in Postwar Lebanon.

Image: Displaced people from the minority Yazidi sect, fleeing violence from forces loyal to the Islamic State in Sinjar town, walk towards the Syrian border on the outskirts of Sinjar mountain near the Syrian border town of Elierbeh of Al-Hasakah Governorate, August 11, 2014. (Photo: Reuters/Rodi Said)