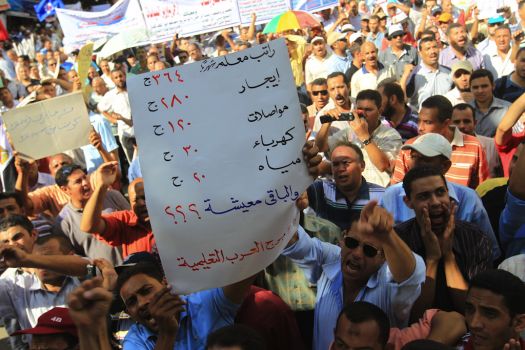 While media coverage of the January 25 anniversary focused on the political and legal demands of protesters – a tranfer of power to civilians and justice for the victims of the revolution – another struggle, that of workers and unions still striving for greater independence and the protection of their rights has been brewing beneath the surface. In an effort to channel the momentum of the anniversary toward realizing their unfilfilled objectives, labor activists and unions joined the youth call for a general strike on February 11. Both the Egyptian Federation for Independent Trade Unions, formed after the revolution as an independent alternative to the state-controlled official Federation for Trade Unions as well as The Egyptian Democratic Labor Congress (EDLC) declared their participation in a planned strike and nationwide civil disobedience campaign. February 11 – the anniverary of Mubarak’s long-awaited resignation last year – was chosen by the organizers for its symbolic significance. As the date approached, ETUF and EDLC intensively publicized the campaign on Facebook on their official Facebook pages, showing solidarity with youth and revolutionary movements calling for an end to military rule.

Despite soaring expectations and anticipation in the days leading up the the planned general strike, the campaign was an undeniable failure: Surprisingly, very few workers responded to calls for sit-ins and strikes. Only university student went on strike, while the majority of workers reported to their jobs as usual. Despite statements of support from ETUF leaders for the strike, some ETUF syndicates staunchly refused to participate, for example the tourism and tax collectors’ unions. Another explanation for the dismal rate of participation in the February 11 campaign was the campaign by state media to smear and discredit strikers as subversive and unpatriotic. Another deterrant dampening enthusiasm for the civil disobedience was the threat by public sector factories and companies to fire any worker who dared go on strike.
But were these the only factors underlying revolutionary youth movements and labor activists’ failure to organize the sweeping civil disobedience campaign that they had hoped would paralyze public services and economic activity on February 11?
Historical precedenent points to another example. Examining a similarly unsuccessful general strike on April 6, 2008 can shed some light the current state of the Egyptian labor movement and its relationship with youth movements and political forces. In 2008, youth cyber activists called for a nationwide strike in solidarity with the 24,000 workers at the Mahalla El-Kobra textile factory who, in addition to their economic grievances, were pushing for political demand, including and end to authoritarian rule and freedom for opposition and civil society groups. Surprisingly, the workers chose to reject calls for solidarity protests by political groups and ultimately cancelled their planned strike, in the face of heightened regie repression. The labor movement’s justification for distancing itself from political forces was these groups had inappropriately taken advantage of the strike — originally motivated by economic grievances – and self-servingly converted it into a political campaign to advance their own agenda, rather than the interests of workers themselves. A lack of cooperation and even hostility between labor activists and political forces was a characteric of the Mubarak era, and the regime had every interest in keeping these two opposition blocs divided and weak.
Aside from the obvious failure of both civil disobedience campaigns, there are other similarities between the February 11 strike and its predecessor on April 6, 2008. Workers have been among the loudest proponents of an end to military rule, as a result of the SCAF’s failure to advance social justice and economic opportunity. But like the April 6 strike, the effectivenes of this year’s civil disobedience campagin was undermined by the unproductive involvement of political groups. Organizing a national wide strike is an action that can only be undertaken by workers themselves and must be consistent with the goal of advancing their economic interests.  Strikes that do not originate from the demands and grievances of the labor movement itself – but are organized artificially from outside it – are doomed to fail. In addition to being alienated by political groups perceived as exploiting the general strike campaign to advance their own political agendas, workers were dissuaded   from participating by a simple cost-benefit analysis.
with the 2008 strike, the risk of repression was simply too high compared with the potential payoff of “civil disobedience,” which was viewed as unlikely to yield immediate and concrete benefits for workers. Moreover, some sectors such as the tax collectors felt that participating in the campaign would do serious damage to Egypt’s economy, and were unwilling to take the risk in exchange for the short-term gains and concessions that a strike might bring. Tax collectors and other workers who chose not to participate viewed their striking peers as irresponsible.
While similarities between the two strikes about, one clear difference not seen during the Mubarak era was the willingness of the labor leaders either in ETUF and EDLC to express support for the demands of political groups, and recognize their common interest in ending military rule. While workers are still resistant to being taken advantage of by revolutionary groups, they are increasingly sympathetic to the latter’s cause and view the current undemocratic status quo as politically and economically unsustainable.
Nadine Abdalla is a Research Fellow at the Arab Forum for Alternative Studies (AFA) in Cairo and Ph.D. candidate at the Institute of Political Studies (IEP) in Grenoble, France. Her research interests include labor movements in the post-Mubarak era and democratic transitions in comparative perspective, with a focus on Egypt and Eastern Europe. She can be reached at [email protected]
Photo Credit: Global Post