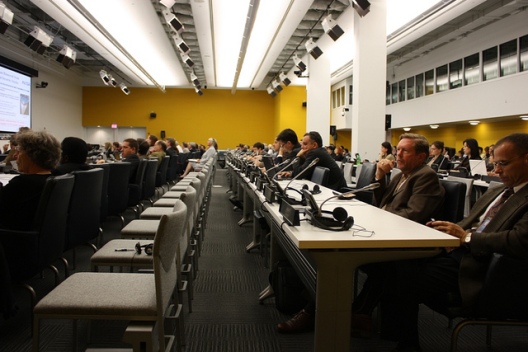 As Syria dismantles its chemical weapons infrastructure and Iran places verifiable limitations on its nuclear program for the next six months and potentially longer, an opportunity for further progress on the elusive goal of ridding the Middle East of all weapons of mass destruction (WMD) presents itself. While old challenges remain and new ones have materialized, it would be a net loss for all regional parties to fail to take advantage of the momentum currently provided by international nonproliferation diplomacy in the Middle East and launch regional talks on security and arms control that would benefit all.

Such talks were supposed to happen last December under the auspices of the Nuclear Nonproliferation Treaty (NPT), but they were postponed indefinitely due to Israeli concerns over their timing and mandate as well as regional turmoil and uncertainty caused by the Arab uprisings. The 2010 NPT Review Conference adopted a consensus document with a call to convene a conference in 2012 on the establishment of a Middle East zone free of nuclear weapons and all other WMD (the Middle East Resolution of the 1995 NPT Review Conference is the precursor to the 2010 consensus document). The 2012 conference was slated to take place in Finland and Finnish Undersecretary of State Jaakko Laajava was assigned the job of facilitator. Since his appointment, he conducted numerous consultations with states in the Middle East. He noted in his April 2013 report that all states in the region “share the goal of establishing a zone” and many emphasize that the process is a unique opportunity to foster regional security cooperation.

Yet diplomatic niceties aside, the path to “regional zero”—i.e., a Middle East with zero mass destruction weapons—remains long and arduous. The region is in such a state of flux that some countries may not even be presently capable of taking part in regional security talks. Take Syria, for example, whose government is fighting for its life. Or Lebanon next door, which has been without a government since March. Jordan is on the brink too, though somehow has managed to weather the Syrian storm, for now. Post-Mubarak Egypt’s profoundly uncertain transition has paralyzed Cairo on the regional stage. Post-Qaddafi Libya is a stateless and militia-governed territory, while post-Ben Ali Tunisia’s new salafist politics threatens to open the door to Islamist radicalization in the country and tear apart the pluralist fabric of its society.

Things are not much better domestically in the Gulf, either. Countries like Saudi Arabia and the United Arab Emirates are nervous about the rise of the Muslim Brotherhood and Islamist affiliates across the region that could challenge monarchical rule. Qatar is likely to turn inward because of its recent transfer of power. The Sunni minority government in Bahrain is on life support due to growing discontent among the country’s Shia, who represent the majority. As for Iraq, a decade after the removal of Saddam Hussein from power, the country is still reeling from massive insecurity and al-Qaeda-affiliated terrorism.

Turkey and Israel have also been hurt politically by regional developments. Turkey’s failed foreign policy of “zero problems with neighbors” has cost Recep Tayyip Erdogan political capital at home. The Turkish premier has switched his political focus to the interior in order to improve his domestic position. As for Israel, having waged all-out diplomatic war against an Iranian nuclear agreement —endorsed by all the major powers of the world—the country finds itself increasingly isolated. Israeli Prime Minister Benjamin Netanyahu feels betrayed by the United States and surrounded by more security threats than ever. But he has to answer to rising criticism at home for his detrimental handling of Israel’s relationship with the United States.

So in sum, most governments in the region are preoccupied with internal issues and frantically trying to ensure domestic stability. Under such domestic political circumstances, inter-state negotiations on long-term issues pertaining to WMD proliferation usually take a backseat to more pressing internal matters.

But that shouldn’t necessarily be the case in today’s strategic environment in the Middle East.

As chaotic as things look domestically across the region and as bad as the timing for regional security talks appears, the US overture toward Iran and the gradual US disengagement from the region and pivot to the Asia-Pacific are likely to create an environment in the Middle East where all regional parties could see greater urgency in exercising restraint, improving relations, and ultimately cooperating on security. Signs of a new and more cooperative regional order are already surfacing.

Consider the immediate effects of the Iran nuclear agreement in the Gulf. A few days after the agreement was signed, something rare happened in Iran-UAE relations: UAE foreign minister Sheikh Abdullah bin Zayed traveled to Tehran and reportedly discussed with Iranian President Hassan Rouhani and Foreign Minister Mohammad Javad Zarif ways to strengthen bilateral relations and cooperate on security. Zarif immediately returned the visit to Abu Dhabi. Reports indicate that the two sides are now closer to reaching a historic deal on the strategic islands of Abu Musa and Greater and Lesser Tunb that allows for the “transfer of the islands to the UAE while Iran retains the seabed rights.”

Bahrain, which for the past few years has accused Tehran of destabilizing it and backing the uprising against its ruling family, invited Zarif to take part in this year’s Manama dialogue, although the Iranian foreign minister could not attend. The small Gulf kingdom, seen by regional powers as a Saudi protectorate, would not have been able to extend such an invitation without the tacit approval of Riyadh. Zarif also recently visited Kuwait and plans to go to Saudi Arabia in the near future, which (if it happens) would be a monumental event in the region. Worried that they would be left behind as a result of potentially improved US-Iran relations, some Arab Gulf states have chosen engagement instead of confrontation with Iran. These Arab Gulf states are not exactly bandwagoning but they are hedging their bets and exercising hard-nosed realism in light of new regional circumstances.

Such changes, of course, should not be taken out of proportion, and the Saudi-Iranian rivalry will not suddenly disappear. These diplomatic overtures will not automatically pave the way for cooperative security in the Middle East. Israel and the Arabs still struggle with their old issues and Arab-Israeli peace still looks distant. But for the first time in the history of the region, Middle Eastern countries are thinking autonomously about ways to improve their security and that of their neighborhood. That offers more good than bad to the United States, and specifically allows it to be more confident about its ability to implement its global reposturing strategy.

On the heels of two US arms control breakthroughs in Iran and Syria, the United States, along with the conveners of the 2012 conference, the Secretary-General of the United Nations, Russia, and the United Kingdom, should seize the diplomatic momentum and encourage all regional parties, including Iran and Israel, to agree on holding a regional security and arms control conference. But Washington should watch from afar this time, let the regional parties maintain ownership of the process, and lend political support only when necessary.

Regional parties should aim high but start small and pursue an incremental approach based on tangible results. They should also leave no stone unturned, break traditional barriers and dichotomies—such as “conventional vs. unconventional weapons” or “peace first-arms control second”—that have always had faulty logic, and come prepared to discuss their various security concerns in a holistic fashion. It should not just be about Israel’s bomb or Iran’s path toward the bomb; the Middle East has enough problems (including border insecurity, arms smuggling, arms races, territorial disputes, state weakness, radicalization, terrorism, humanitarian disaster, economic collapse, environmental degradation, etc.) that require urgent attention and cooperation, and have an immediate effect on people’s lives.

Some Middle Eastern countries might object to this comprehensive approach and argue that lumping everything together in one basket undermines past nonproliferation agreements and diminishes the critical importance of mass destruction weapons. But if there is one lesson that the region can learn from the Iran agreement, it is that confidence-building and verification come first. Putting the cart before the horse, which has been the practice in regional nonproliferation diplomacy for decades, will only prolong the diplomatic stalemate and further distance the Middle East from getting to zero.

As regional relations pacify, real cooperation takes place, local capacity to verify and implement agreements develops, and trust improves, Middle Eastern states might then have enough confidence to move to the more challenging and intractable issue of disarmament and the ultimate goal of regional zero.

Bilal Y. Saab, a nonresident Middle East scholar at the Center for Nonproliferation Studies, is Executive Director and Head of Research of the Institute for Near East and Gulf Military Analysis (INEGMA) North America.