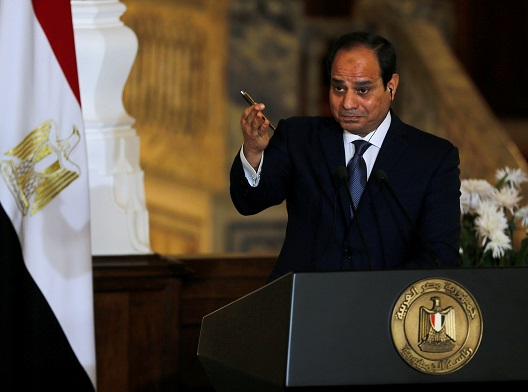 A little over a year ago, it was still possible to speak of the ‘regimen’ of Egyptian president Sisi’s ‘non-regime.’ Power was dispersed, disparate, and given to erratic bursts of energy, that had far more to do with localised and internal disputes, than to an overarching directive from a cohesive chief governor.

A year later, things may have changed. The changes ought not to be over-emphasised or exaggerated; the state remains fragmented—even disjointed—in many ways. But it is instructive to see where that has changed, where it has not, and why.

The security apparatus has remained relatively cohesive. The Supreme Council of the Armed Forces has already been significantly restructured since 2013, as has the General Intelligence Service. Consolidation there has already been smoothly carried out. The recent failed attempt to apprehend Habib al-Adly, Mubarak’s last interior minister, may indicate some interesting distinctions within the wider security establishment. His Mubarak-era connections were not enough to protect him; security forces arrived at his house to arrest him in May, only to find that he had fled from the same security service he once oversaw.

But two other institutions are of particular interest: the judiciary and al-Azhar.

The media has been awash for months about increased tension between the executive and the judges—with two main claims about the sources of the tension. The first is that the tension is due to the judiciary’s handling of the ‘Islands Affair’—in other words, the transfer of the two islands in the Straits of Tiran, between Saudi Arabia and Egypt, to Saudi control. The Egyptian presidency agreed to transfer the islands of Tiran and Sanafir to Saudi Arabia—but the judiciary has thrown a wrench into the works by a number of rulings. In particular, Yahya al-Dakruri of the Court of Administrative Justice, blocked the transfer in a ruling last year—which reportedly aggravated relations between Riyadh and Cairo.

The second claim is that the tension between the executive and the judiciary has increased because of recent court rulings that have lessened court sentences against certain high profile members of the Brotherhood. It’s a less viable explanation. It is often within the Egyptian judicial system that more senior judges will overturn the lower courts—in any case, the rulings have not resulted in any recent high-profile Brotherhood leaders or supporters being released. Indeed, some in previous years were released—such as Morsi’s last prime minister, Hisham Kandil (though not a Brotherhood member)—and these went off without any real attention.

It is difficult to see the recent attempts to limit and restrict judicial autonomy except against the backdrop of the islands case. Parliament proposed a law that strengthened the role of the executive in deciding key posts within the judiciary. There were suspicions that the draft law might have been intended as a warning—a ‘shot across the bow’, as it were—but such suspicions have been put to rest. The bill was passed with a two-thirds majority. Above and beyond the objections of Judges Club (a highly significant, if unofficial, judicial institution) the Egyptian presidency signed the bill into law within hours. The following day, Pope Francis of the Catholic Church visited Egypt, and the media moved on.

The new law does not mean that the presidency can pick anyone it likes to head up the three major branches of the judiciary (the Court of Cassation, government lawyers, and State Council). Rather, if the judiciary’s branches comply with the new law in putting forward three of its seven most senior judges, the executive is limited to choosing from among those three. If, on the other hand, a branch chooses to ignore the law and puts forward only one candidate, the presidency could pick anyone it likes from the seven most senior judges in that branch.

Nevertheless, the move is a change from the previous legal regime, placing more power with the executive.

Where this ends is somewhat of an open question. Theoretically, the Supreme Constitutional Court remains untouched by the new legal regime—and it could, in theory, hear a challenge to the new law. The Court of Cassation, and government lawyers, have both complied and put forward nominees in line with the new legal regime.

The State Council, however, has ignored the law entirely—and on Saturday, May 13 put forward Yahya Dakruri as their sole candidate. Under the previous system, this would have been normal, especially since Dakruri is the branch’s most senior judge. But it is now a challenge to the executive. Will the presidency avoid a confrontation with the judges, and ratify Dakruri as head of the State Council? Or, as the new law allows, will Sisi pick someone else from among the seven most senior judges?

The discussion is not merely an academic one. The very existence of a confrontation of any kind means that there are still power debates within the Egyptian system—but the way in which it has unfolded thus far shows clearly how limited the arena is.

When it comes to the second institution that has been cited as being targeted for greater control by the executive, things are a lot clearer. Much of the media has been awash with suggestions that Sisi and the head of al-Azhar, the Grand Imam Ahmad al-Tayyib, are headed for a show-down, which is odd considering that al-Tayyib has been quite loyal to the state.

There are no suggestions that Sisi is aiming for some kind of ‘religious reformation.’ By all accounts, he is devout in his practice, and in terms of his approach to religion, he does not seem to have much opposition to the fundamentals of traditional Sunni epistemology—hence his appointment, for example, of Osama Sayed, a young but traditionalist Azhari, as his advisor on religious affairs.

But Sisi’s statements do indicate a certain lack of patience with the Grand Imam and the religious establishment more generally—the most recent related to Sisi’s views on the current law on divorce. The irony is that Sisi’s suggestions could have been formulated in reference and within Sunni jurisprudence—but his direct engagement in such affairs that are normally the domain of religious scholars in Egypt has ruffled feathers. Amr Ezzat of the Egyptian Initiative for Personal Rights put it well in a recent interview with Mada Masr: “Sisi, however, approaches them with a kind of arrogance that might have angered them, especially as he usually starts such discussions in public without bringing them up with the clerics (sic) beforehand, putting them on the spot.”

All of that tension meant that when Mohamed Abu Hamed, a member of the Egyptian parliament, who is very supportive of the presidency, decided to present a bill that would put term limits on the Grand Imam’s position and allow the government to take punitive measures against him, speculation was rife about the executive trying to exert direct control over al-Azhar.

But the speculation seems ill founded. On May 10, a substantial parliamentary delegation went on a highly publicized visit to the Grand Imam’s office to express support for al-Tayyib. The legislation and religion committees in the parliament itself rejected Abu Hamed’s proposed law; and the speaker of the parliament, Ali Abdul Aal, publicly expressed appreciation for al-Tayyib in the parliament’s general session on May 8. If the executive were, indeed, serious about a conflict with al-Tayyib, it is dubious the parliament would be expressing such support for him.

There may be tension—and perhaps the bill was a warning. But thus far, al-Azhar has successfully negotiated its relative autonomy within the Egyptian political system—and it is not set to change any time soon.

The Egyptian political arena is exhibiting a type of activity unprecedented in the Mubarak era. Carnegie scholar, Nathan Brown, suggests: “The Sisi presidency is attempting to bring coherence to the Egyptian state apparatus, but the tools which it is using are not subtle or liberal, even on a tactical basis. Instead, the new regime is jawboning, threatening, and legislating in order to rein in centers of power and autonomy in the state apparatus. Much of what passes for politics in Egypt today consists of the sound effects from those struggles.”

However, the amount of play is limited. Theoretically, one could ask if tensions within the political system could challenge Sisi enough that he would not run for re-election next year.