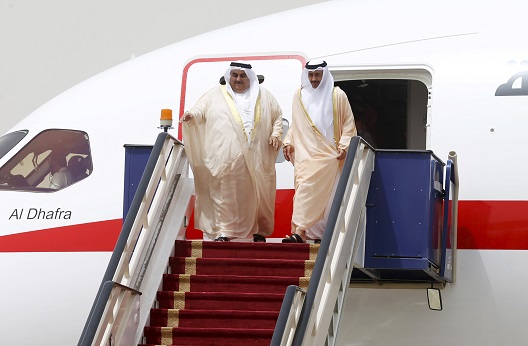 Recent news reports of the Saudis burning through their foreign currency reserves at record pace over the past couple months. Combined with the growing conflict in Yemen and an already heavy engagement in Syria begs questions about the future of Saudi Arabia and its Gulf Cooperation Council (GCC) neighbors. Three key pillars of stability—security, economics, and legitimacy—are now under threat, any one of which casts increased uncertainty on the region.

First and by far the most dangerous is the growing threat of conflict spreading throughout the region. While the price paid in human tragedy—let alone property and long-term economic prospects—is greatest for the Syrians and Yeminis, the Saudis and other Gulf states’ proxy war in Syria and an even hotter one on their doorstep in Yemen does not come cheap. A long-term financial drain often comes with these types of conflict, as the United States found out over the past few years in Iraq and Afghanistan. On average, history tells us these civil wars drag on with varying levels of intensity for six to nine years. If the P5+1 agreement to keep Iran from reaching a threshold for nuclear weapons sticks and sanctions are eased, Iran may have more wherewithal to help its proxies, upping the potential for even costlier engagements. Saudis became the largest buyer of defense equipment last year, according to consultants at IHS Inc. Experts are concerned that a major arms race could further heat up with the removal of sanctions on Iran.

The second pillar in jeopardy is the region’s long-term economic outlook. Widespread worries several years ago about “peak oil” has given way to those about “peak demand,” which may not be that far down the road. Citigroup analysts have argued that it could be reached as early as the end of the decade. At the same time, supply is increasing, particularly with growing shale production. Moreover, an accelerating switch from fossil fuel to alternative energy would further lessen demand. Even as oil alternatives take a greater share of the market, starting from a very low base, more countries (including China) have adopted greater fuel efficiencies for vehicles—all of which will dampen demand growth for fossils fuels, particularly oil.

Gulf states understand the implications of long-term reductions in oil demand (including reduced revenue, foreign investment, and influence) but have not moved fast enough to deal with the prospect. Despite huge investments in education by some Gulf states (Saudi Arabia is ranked as the world’s highest spending nation on education), the unequal distribution and inadequate quality of education—including overcrowding in public universities, insufficient training for teachers, and outdated curricula—reduce the returns on this investment. Unfortunately, they do not have much time to get it right. One-quarter to one-third of the population in the small Gulf states are between the ages of fifteen and twenty-nine, with unemployment hovering between 17 and 24 percent (except in the United Arab Emirates where the rate is lower).

More than 60 percent of Saudi Arabia’s population falls under the age of thirty. Yet, according to the IMF’s 2013 country report, 1.5 million of the 2 million new jobs created in the last four years went to non-Saudis. Meanwhile, the unemployment rate among Saudi nationals has reached 12 percent. Unemployment has hit youth (30 percent) and women (35 percent) particularly hard. Saudi employment as a percent of total employment has actually declined since 2009. Youthful populations are a boon for developing countries that provide job opportunities; without options, they are a source of instability, as seen during the Arab uprisings in early 2011. The attraction of radical jihadism to marginalized youth poses a global threat; a surfeit of unemployed, frustrated youth will only aggravate the problem.

The last threat is the domestic challenge to the Gulf’s political legitimacy. It is a truism that rentier states such as most of the Gulf states can defy the odds in the otherwise worldwide trend towards democratization over the past couple decades, but they cannot likely hold back more accountable and participatory government forever. Gulf states have some of the highest per capita incomes and, although they may not be teaching the right skills, enrollment rates are commensurate with those in many emerging democracies. Per capita and education are two of the biggest factors that historically bring about democratization. Nevertheless, despite some growing political activism (most visibly in Bahrain), Gulf authoritarians have remained in charge. Former Saudi King Abdullah bin Abdulaziz Al Saud increased social and infrastructure spending in the wake of the 2011 Arab uprisings to fend off any revolutionary impulse. More recently, his successor King Salman bin Abdulaziz Al Saud ordered a two-month bonus for government employees and pensioners. With lower oil revenues and increased domestic and military spending, the Saudi budget deficit is now expected to widen this year to 14.5 percent of GDP from a gap of 1.9 percent in 2014. The sad fact is that the Gulf states probably cannot cut social benefits without diversifying their economies—including investment in human capital—and ensuring political stability through greater reforms.

In the short term, regional conflicts may help divert public attention from the political and economic shortfalls, but unless Gulf leaders deal with these domestic problems, it is hard to be optimistic about their long-term future. Resolving the widening conflicts may be a harder nut to crack, but a first step would be outreach to Iran and greater efforts to end the fighting in Syria.

Mathew J. Burrows serves as the Director of the Atlantic Council’s Strategic Foresight Initiative in the Brent Scowcroft Center on International Security.