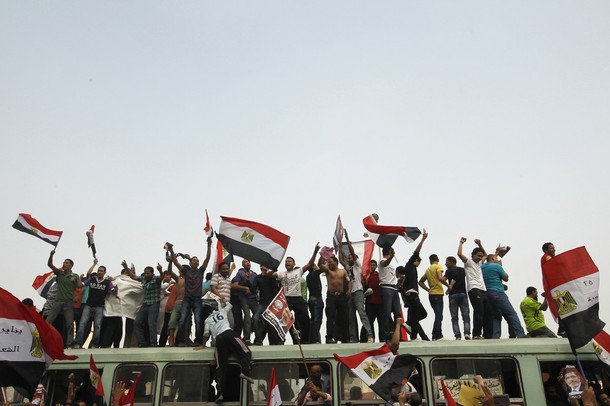 Testifying today as part of a US House of Representatives Middle East Subcommittee panel on Egypt will be quite challenging in view of the breakneck pace of events.  Today a coalition of judges who set out to do a parallel count announced that they agreed with the Muslim Brotherhood that Morsy won by about 900,000 votes.Download the PDF   But the Presidential Election Commission, whose decisions are final and cannot be appealed in court, is now reviewing complaints of irregularities by both campaigns, and has said it will announce the final result tomorrow.  Al-Yom al-Sabi’ quotes a high level judicial source saying that the PEC is unlikely to accept their complaints because they pertain to the operation of individual polling stations, which apparently would have had to be resolved before general committees gave their counts to the PEC.  And he confirms that the result must be announced tomorrow.  I expect that demonstrations and violence might well ensue Thursday night and Friday.  If the PEC disqualifies enough votes to name Ahmad Shafik the winner, hold onto your hats.

Here is the written testimony I submitted (PDF):

Reflections on the Revolution in Egypt, Part II

Thank you, Mr. Chairman, for the honor of testifying before the subcommittee.

With the conclusion of their first post-revolution presidential election, Egyptians should have been celebrating this week the transition from interim military rule to government by elected civilians. Instead, they are demonstrating in Tahrir Square again. The question, Mr. Chairman, is whether the democratic transition in Egypt has gone irretrievably off the rails or can get back on track.

The Supreme Council of the Armed Forces (SCAF) promised in February 2011 that they “would not go back on their promise to surrender the country to civilian authorities within six months” and that “the pre-January 25 status quo will never return.”[1] Sixteen months after making that promise, the SCAF was on the verge of finally surrendering executive powers to an elected president, having given over legislative powers six months ago to an elected parliament. But at the eleventh hour, the SCAF acted in concert with the Supreme Constitutional Court to reclaim legislative powers from the “Parliament of the Revolution” in which Islamists held a majority, as well as to limit the new president’s powers. After the court declared the parliamentary elections law invalid on June 14, thereby requiring the assembly’s dissolution, the SCAF issued a supplementary constitutional declaration that allows it to:

In sum, the declaration positions the military as a power separate from and above elected civilian authorities, and forces the writing of a new constitution in haste and under the pressure of military rule.

SCAF officials have said repeatedly in public and in private that they do not want to rule Egypt. That might be true, but what these developments show is that they want even less to allow anyone else, including democratically elected representatives, to rule the country. While there is a fig leaf of judicial legitimacy to the decision invalidating the parliament, it is difficult to escape the conclusion that the military leadership saw that Mohammad Morsy, candidate of the Freedom and Justice Party (formed by the Muslim Brotherhood), was about to win the presidency and acted preemptively to deprive the Brotherhood of its parliamentary majority.

Even if the invalidation of parliament was the result of an impartial judicial ruling, there would be no justification for the SCAF’s recent declaration. The SCAF could have simply called for new parliamentary elections to be held as quickly as possible, without seizing powers from the president and forcing the writing of a constitution before a new parliament could be chosen.

It seems likely, however, that senior members of the Egyptian judiciary (one of the few institutions that enjoyed credibility with the public) have decided to take sides in this power struggle. The June 14 ruling came on the heels of a number of other judicial moves that served SCAF interests, including:

This disruption and manipulation of the political transition to serve military interests also comes at the expense of Egypt’s economy and national security, which will suffer as a result of the ongoing struggle between the military and the Brotherhood. The economy is teetering on the brink of disaster, and the new developments will push off for months the time when international financial institutions and donors feel confident enough to make loans and grants to a new Egyptian government. Meanwhile the lawless atmosphere in the Sinai continues to present threats to Israel (as seen in the June 18 incursion in which one worker was killed) and to inhibit a return of tourists to Egypt; it will be difficult for the new president and military to impose order there amidst this political chaos.

The US administration has chosen until now to place its bet with the SCAF, showing consistent support for the Egyptian military despite pervasive human rights abuses and even a campaign against American non-governmental organizations carried out under military rule (which still continues). It is time to reconsider that bet, and to apply the conditions that the Congress placed on future military assistance, which the administration chose to waive in May. The United States might not be able to control or change the behavior of Egypt’s generals, who appear willing to pay any price to avoid bowing to the choices of Egyptian voters. But the United States can and should decline to use its taxpayers’ funds to support such leaders. The United States should withhold assistance for now, while articulating a desire to build a new partnership with Egypt once it is on the road to becoming truly democratic, respecting the rights of all of its citizens, and playing a responsible and peaceful regional role.

[1] “SCAF: We will return authority to civilians and the constitutional committee will complete work within 10 days” (report of SCAF meeting with editors of major newspapers), al-Masry al-Youm (Arabic),February 15, 2011.