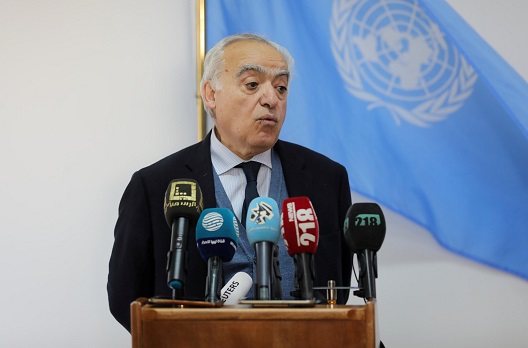 Since 2011, Libya’s path to democracy has been unclear. The United Nations’ (UN) inability to bring warring factions to the negotiating table has left the country in chaos. While negotiations have failed, the UN is pushing to hold elections in 2018. Given the chaos in the country, however, will the UN overcome the challenges needed to execute elections successfully?

The prospect of peace and democracy never appealed to Libya’s warlords. As recently as last December, General Khalifa Haftar, leader of the self-proclaimed Libyan National Army (LNA), made a statement dismissing the UN-sponsored dialogue. His position has not changed much since 2015 when he declared that “ the UN negotiations do not concern me” and, only last month, insisted that “ Libya is not ready for democracy.” Recently, Western powers warned Haftar against sabotaging the elections process. Under international pressure, Haftar’s public statements became more reconciliatory. In regions controlled by military governors he installed, however, individuals who announced their candidacy for the new elections are being hunted down and assassinated.

In addition to the oppressive rule of Libyan warlords, a little publicized fact is that large swaths of Libyan lands are under the control of foreign troops. Mr. Hasan Ragaig, the head of the Sebha Elders Council, complained last week that there is no governmental presence in the south. He also warned that foreign troops and mercenaries are in total control. Many Libyan military installations are now flying Chadian flags including the Jabal Military Base, Sebha’s main military installation.

Finally, the House of Representatives (HoR) in Tobruk continues to be an obstacle to holding elections. Instead of acting as the beacon of democracy and providing a platform for free expression, many members of the HoR cannot exercise their freewill or participate in debate as they are under constant threat by thugs loyal to Haftar. Other members, such as Mr. Ibrahim al-Dersi, do not seem to believe in the democratic process. These members represent a violent front and have publicly called for the killing, assassination, and bombing all political opposition.

Extremist groups continue to exploit the unstable situation. Despite the territorial defeat of the Islamic in late 2016 in Operation Odyssey Lightning, groups like the Madkhalis salafis are mushrooming into a formidable force.

In the absence of security, a fair and valid election law, and a ratified constitution, the UN initiative to hold nation-wide elections is likely to be met with failure. Holding elections in Libya would result in violations of certain international laws that call for the full participation of constituents, and produce another ineffective government that can only operate nowhere but Tripoli. Or worse, elections may vote in antidemocratic forces. Libya is at an impasse and the situation is getting worse, including the imminent collapse of the Libyan currency and economy.

Dr. Karim Mezran, Senior Resident Fellow at the Rafik Hariri Center, argues that “going directly to the people to appoint a president and a parliament would bypass all the legal inconsistencies and contradictions around the validity of the HoR and the LPA.” This argument is compelling. How exactly to conduct fair and free elections in Libya, however, has so far remained elusive.

A solution that is both realistic and creative could be to hold elections incrementally in regions that are under civilian control and deemed to be secure and free enough to hold elections, in the place of nationwide elections as the United Nations suggests. As elections are held in such regions, a new parliament is formed. The new parliament will possess sovereignty and will have full legislative powers, including the authority to form a government regardless of the number of members who were voted in. More members of parliament will be elected when their districts satisfy the free and secure criteria. This process will continue in an ongoing fashion with districts electing their representatives to join the newly formed and functioning parliament. With international monitoring and support, electing a new parliament and government will give Libya a fresh start. As outlined below, the process will offer huge incentives for regions to clean up their act and hold elections, thereby encouraging all citizens to take part in claiming back their cities, towns, and neighborhoods.

Holding elections on a rolling or staggered basis is a common practice. In India, for example, elections for the lower house are held over four days, spread out across several weeks, because of the need to redeploy security forces to each region as it votes. In the United States, presidential primaries are held on a rolling basis culminating in each party’s national convention.

There will be some opposition to this option too. The GNA and HoR stand to lose power and therefore may not support this option. If we take their statements at face value, however, the GNA and HoR already announced that they will accept options that include new elections. The track record of the HoR in particular is a cause of great concern. The HoR never ratified the Libyan Political Agreement—the byproduct of the UN-sponsored dialogue. This same agreement requires the HoR to work with the High Council of State to enact an election law and bring a new constitution to a vote. According to the Carter Center July 2012 report, the Libyan Election Law suffers from “inconsistent implementation” and “gaps in the legal framework.” The report also concluded that the electoral system did not “accor[d] each voter and vote equal weight” and therefore “failed to fulfill Libya’s obligations under international public law.” By employing an array of dilatory tactics, the HoR and its president managed to avoid action on all such vital legislation. As a result, Libya plunged further into uncertainty and was deprived of the prerequisite constitutional and legal foundation for new elections and a new parliament.

Putting the llan into action

The existing Libyan High National Elections Commission (HNEC) will oversee the process and will have final say in all procedural aspects. A specified set of criteria will determine when an area is ready for elections. Among those criteria should be that the elections must be held under the control of elected civilian city councils with no military or militia members acting as governors. As regions elect new representatives, a new parliament is formed in a phased process. As evidenced by the fact that it derives its power from the people, the new parliament (even with only a few districts voting) possess sovereignty and will be responsible for forming a government and administering all national resources, especially military forces and petroleum receipts. As an added benefit, phased elections would allow HNEC to focus on smaller and safer regions, thereby reducing fraud and increasing transparency.

In exchange for conducting fair and free elections, regions would receive full funding as appropriated by the new parliament, allowing these regions to set up to provide essential services for their communities. Currently, funds go to those who have power and influence, essentially destabilizing Libya, whereas this new system would reward the promotion of stability and democracy. Of course, to limit in-fighting among factions within Libya, the criteria of ‘fair and free’ would be policed by strict international oversight.

The prospect of receiving full budgets would motivate regions to conform to the process and conduct elections. Voters would exert pressure on their local officials to make certain that clean elections are conducted, making it difficult for anyone to resist holding elections. As towns and cities receive their own local budgets and international aid, neighboring districts will race to catch up, ensure compliance, hold elections, and become part of the new parliament.

Breaking up elections in this way could also be used to ratify a modified 1963 constitution or the proposed constitutional draft that will govern the transitional period and prevent a legal vacuum. The ailing and expired elections law must also be updated to satisfy international standards of one-person, one-vote and equal suffrage. Such an update could be handled by a UN-appointed committee composed of international experts and Libyan judges. As more districts conduct elections and send representatives to the new parliament, further votes of confidence in the government could be held, giving these late comers a voice in determining the future direction of the political process.

Making this process successful will require the United Nations to set, and be willing to carry out, specific repercussions for anyone who hinders the law. Pro-Qaddafi forces need to be reined in. Regional powers have to be told to keep their hands off Libya. The international community must refrain from double dealing and interact only with the newly elected parliament and government. If these prerequisite steps are taken and the principles of the Libyan revolution are preserved, holding elections in this manner will be successful.

Finally, to make sure that the voices of the people are being heard and not those with links to extremists, the Qaddafi regime, or to present day oligarchy, there would need to be limits on the financial resources that candidates are allowed to use in their bids for office, as well as a prohibition on candidacy for those who have committed financial or other crimes. This is particularly important in a system of spacing out elections because the time in-between gives groups the ability to organize themselves to manipulate the vote. Those who fail to adhere to these rules, or attempt to incite instability through unrest or petroleum manipulation, would find themselves not only responsible to Libyan authorities, but would also face international repercussions.

Holding elections incrementally will give the Libyan people a chance to move closer to a functioning democracy, restore security, and be ready to do business with the outside world, all in a phased and controlled manner that rewards compliance and success.

Emadeddin Muntasser is a human rights activist, political analyst, and a writer. He is the president of the Democracy and Human Rights Foundation and a member of the board of the Libyan American Public Affairs Council. An engineer by training, Mr. Muntasser earned a graduate degree in artificial intelligence and holds several US patents.