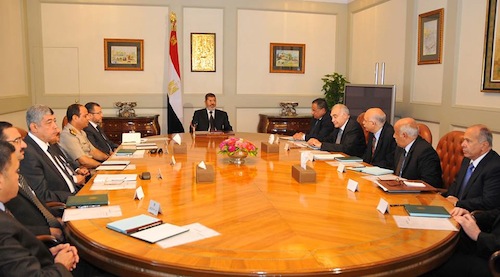 To the casual observer, it would appear that President Mohamed Morsi and the ruling party’s problem is that they have no plan and have offered little in the way of real solutions to the major crises facing Egypt: electricity and fuel shortages, a spiraling economy, a lack security sector reform, rights abuses, and ailing education, healthcare, and traffic systems. However, the biggest problem facing the country is that all political leadership, both the member of the ruling party and opposition, have lost the confidence of majority of Egyptians, leaving no one with the political capital necessary to make the tough decisions. Unfortunately the president’s own actions have put him in the crosshairs of mounting public anger by alienating all but his core supporters, allowing for a campaign like Tamarod (Rebel) to galvanize the street into mass protest calling for his resignation.

Morsi won the vote, but not without the perception among some that political manipulation surrounded the elections. In the run offs to the presidential elections, voters were left to choose between Hosni Mubarak’s last Prime Minister, Ahmed Shafiq, and the Muslim Brotherhood’s backup candidate, Mohamed Morsi. Neither was ideal. The choice caused deep divisions in the political sphere, but with many revolutionaries seeing a return to the old system as a bigger threat to the democratic transition, they decided to give Morsi a chance. After the runoffs, prior to the official announcement, both Morsi and and Shafiq claimed victory. Morsi’s supporters took to Tahrir en masse, some believed, to pressure the then-ruling military into announcing Morsi as the winner, with many interpreting the protests as a threat. A week went by, and constant rumors of meetings between the Supreme Council of the Armed Forces (SCAF) and members of the Muslim Brotherhood gave the impression to some that Morsi’s win was the result of a negotiation between SCAF and the Muslim Brotherhood, rather than the outcome of the electoral process. Adding to the public mistrust around the election, soon after Morsi’s victory was announced, Shafiq filed a court case claiming the results were rigged. The case remains unsettled until today. Morsi may well have been the true winner, but the entire process was tarnished in the eyes of a large number of Egyptians.

Morsi’s initial political legitimacy came as a result of the Fairmont Agreement, where a diverse group of political players and revolutionaries come together prior to the second round of the election to announce their support for his candidacy. One year after the election, and most of the ‘Fairmont Group’ has withdrawn support for the president, citing his failure to live up to his promises. Not only has the president lost the support of many outside the Islamist bloc, but his actions over the past year indicate that the Muslim Brotherhood aims to consolidate power, and shut them out in the process.

A little known fact is that Morsi’s first broken promise to the Fairmont Group was announcing Hisham Qandil as Prime Minister, without their support. One of the Fairmont Group’s key conditions was the formation of a national salvation government. Removing Qandil and his cabinet has long been a demand the opposition has made, but is one that the president has ignored.

Other conditions for the Fairmont Group’s support of Morsi included the creation of a ‘national unity project,’ and the formation of a presidential team comprising members from across the political spectrum. Morsi’s advisory team began dominated by Islamists, with ten out of seventeen belonging to the Islamist spectrum. A lack of engagement among his presidential advisors in key decisions has left the team even less diverse, following mass resignations and recrimination, by both liberal and Islamist figures.

In response to mounting public discontent, the Freedom and Justice Party (FJP) and the Muslim Brotherhood mounted a smear campaign and judicial harassment of dissenters, including the judiciary, press, political opposition and human rights defenders, at times provoking their supporters to violence against the growing opposition. Most recently, at an event held in support of the Syrian resistance, in the presence of the president, government officials, and leaders from the Muslim Brotherhood, speakers incited against Shiites and participants of the June 30 protest. The event is believed to have directly influenced a mob attack on Egyptian Shiites, leaving four dead. The escalation of divisive rhetoric only served to widen the rift between the government and Egyptian’s supporting the call for early presidential elections.

Finally, in what could have been an opportunity to reach across the divide and mend fences, the president used his State of the Union address to sling mud at the opposition. He accused them of being criminals and thugs, at times naming names and pointing fingers. He all but referred to former regime members, journalists and the owners of independent TV networks, as enemies of the state. Following the speech, and in the lead up to the June 30 protests, the Brotherhood has once again resorted to painting protesters as lawless thugs, or armed Copts.

Having lost public legitimacy, the FJP and the president are using the politics of divisiveness to polarize the country in an attempt to inoculate themselves from public discontent, threatening to throw Egypt deeper into crisis. A statement yesterday by Office of the Assistant to the President on Foreign Relations and International Cooperation again painted some of the protestors as rapists and thugs. Instead of securing their position, they have managed to do what the opposition could not, mobilize the public against them, and in the eyes of many, for all intents and purposes, lose the presidency. In an interview with the Guardian, Morsi ruled out June 30 as a second revolution, as competing protests take place across the nation, both in support of and against him. In the interview, he echoed the words of his predecessor, saying that his early resignation would lead only to more chaos, words that have sadly rung true, with the last two years in Egypt highly unstable. Whether the June 30 protests will bring an end to that chaos, or simply ensure it is prolonged, remains to be seen.

Nadine Wahab is a human rights defender and the International Advocacy Officer with the Cairo Institute for Human Rights Studies.