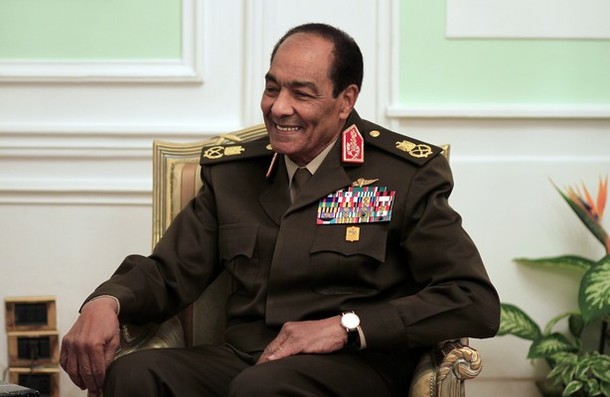 Described by Human Rights Watch (HRW) as a first step towards accountability for military abuses, civilian judge Tharwat Hammad was appointed to investigate military responsibility in the killing of protesters under the Supreme Council of the Armed Forces (SCAF).

With over 136 accusations brought against the former Minister of Defense and SCAF head, Hussein Tantawi, as well as former Chief of Staff Sami Anan and head of the military police, Hamdy Badeen, a civilian judge will be looking into complaints filed by citizens against the trio, investigating some of the military’s most violent crackdowns during their 18 month leadership of the country.

Hammad’s appointment could mark a precedent after well over a year of little or no accountability whatsoever as far as Egypt’s military has been concerned. In only two instances, military investigations into the past 18 months led to a trial. An investigation into the killing of over 20 mostly Coptic protesters led to the conviction of three low-level soldiers – each charged with involuntary manslaughter. The convictions carried with them a sentence of two to three years. In the case of the Samira Ibrahim, a female activist who accused military personnel of sexual assault, in what has now become known as the “Virginity Tests” Trial – the defendant was acquitted. In both instances, senior military members were not investigated. All other instances of violence or abuse carried out by the military, and documented by HRW, are yet to be investigated.

Both the Mapero and Virginity Tests trial verdicts were criticized, not only for the lack of accountability, but for the very fact that the military was investigating itself. Impartiality was not to be expected in either of these trials. Speaking about Hammad’s appointment, Deputy Middle East and North Africa director at Human Rights Watch Joe Stork said, “If backed by full support from the political authorities, this civilian investigation could become the first serious step toward reversing the impunity the military has enjoyed so far.”

This is not the first time Hammad’s name has come up in connection with military related investigations. Hammad was the investigative judge in the public prosecutor’s investigation into the Maspero protests. The case was closed, with no charges made against military personnel. Charges brought against most of the activists were dropped for what Hammad explained was a lack of evidence. Two protesters, Michael Adel Naguib and Michael Shaker were referred to a criminal court for allegedly stealing a military automatic weapon. Their trial continues to be postponed.

Hammad is also the investigative judge tasked with questioning dozens of Egyptian journalists in connection with complaints made about the media’s criticism of the judiciary. He released journalist and TV host Wael al-Ibrashy on EGP100,000 (over $16,000) bail.

Since Morsi’s election small gains have been made. The president’s pardon of political prisoners involved in the January 2011 uprising, while welcomed by activists and human rights groups, was not seen as sufficient. Morsi’s decree stated that all felony and misdemeanor convictions or crimes committed to “support the revolution” and the “fulfillment of its goals” would be pardoned. The decree’s wording was criticized as it left the door open to not releasing prisoners simply by alleging they were not protesters.

Countless prisoners have been released, including most of the April 8 Officers – members of the military who were arrested in Tahrir for their participating in protests. While most of the April 8 officers were released, according to his mother, officer Mohamed al-Wadie, was not , having spent the past 18 months in prison, 4 of which were in solitary confinement.

The HRW statement also reiterated its recommendation to amend the Code of Military Justice to ensure that civilians are no longer brought before a military court. The now-dissolved parliament made one small amendment in May 2011, limiting the right of the president to refer civilians to military court, a move which did nothing to address the real issues that have been highlighted by military trials of civilians.