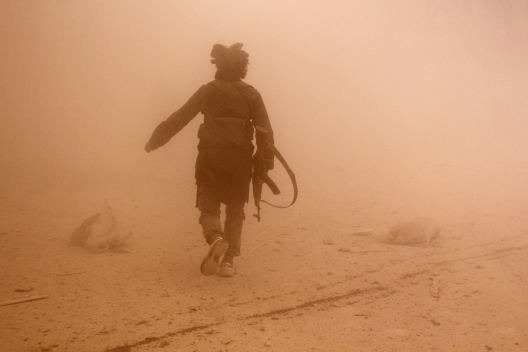 On President Barack Obama signaled a profound shift in American policy toward .  He told foreign chiefs of defense at Andrews Joint Base that beating the Islamic State in Iraq and Syria (ISIS, also known as and the Islamic State) in Syria will “require us developing and strengthening a moderate opposition inside of Syria that is in a position then to bring about the kind of legitimacy and sound governance for all people inside of Syria.”  A policy of preparing the opposition to govern seemingly canceled one of hoping that Syrian peace talks were just around the corner. What is needed now is an implementing strategy.

Developing and strengthening a moderate governing presence inside requires a place on the map to get started.  Priority number one for the should be to work with and Jordan and the mainstream Syrian opposition to establish a protected zone or zones in where governance can take root. Time is of the essence: nationalist forces in the north are on the verge of being beaten by a combination of the regime, ISIS, and the Nusra Front: terrorists all.

Indeed, President Obama’s new policy is stillborn so long as civilian neighborhoods and nationalist military units are attacked by ISIS, Nusra, and Assad.  Any attempt now by nationalists to govern openly in non-regime, non-jihadist areas of would be to invite a Levantine Bay of Pigs. Imagine what might happen to Syrian civilians if the Istanbul-based Syrian Interim Government were to move to Syria right now and, in concert with local committees, begin governing. Already the tempo of regime barrel bombing of civilians has picked up dramatically as the bombs ISIS and other jihadists, leaving Assad and company free to pile up the bodies.

Enabling the nationalists to govern means neutralizing regime and jihadist military and terror operations in a specific area or areas. Ground power from regional states to blunt jihadists and the regime would be essential. The American role, supported by other coalition members, would be to ground Assad’s air force while providing tactical air support to ground forces, thereby ending barrel bombing atrocities, repulsing ISIS, and giving nationalists a chance to govern.

Already in eastern there is a significant amount of airspace where regime aircraft do not fly.  This kind of practical aerial de-confliction should be extended to the entire country.  It need not be preceded by destroying Syrian air defenses.  Step one would be to notify the regime that coalition air operations will be extended to the entire country, and that any regime military aircraft flying in Syrian airspace (or in designated parts thereof) would be regarded as hostile. Such a warning must be accompanied by willingness to shoot down violators. And yes, escalation would be possible: the and its partners might be required – depending on the regime’s response – to destroy its military aviation, its support facilities, and its air defenses. Such an outcome would, among other things, be the best humanitarian development to date of the 21st century.

Establishing a zone or zones for Syrian nationalist governance to take root would help neutralize ISIS and other jihadists while destroying whatever is left of Syrian Army confidence in the leadership and judgment of Bashar al-Assad.  Yet this potentially decisive move must be accompanied by a clear statement from President Obama to the Syrian people: the will support a of equality under citizenship and nothing less; a of inclusiveness where all groups composing the national mosaic will participate in rebuilding and governing the country.  Strong action now combined with assurances to all Syrians could set the stage for a negotiated settlement that ousts the rapacious Assad clan while preserving and eventually reforming the institutions of what is left of the Syrian state.

Time is of the essence.  As temporizes in implementing the president’s declared policy Assad and the jihadists work to erase what is left of the armed nationalist opposition inside .  Reports suggest that the Al Qaeda-affiliated Nusra Front has now formed a threesome with and the regime to try to finish off the nationalists favored by the and its partners.  Aleppo is in the spotlight.  If it falls to some combination of the regime and jihadists the president’s new policy may well revert to the old one: praying for a diplomatic miracle. Exaggerated claims of American assistance to nationalists are having the perverse effect of painting bullseyes on their backs.  What is needed now is the real thing, and plenty of it.

Also worrisome are statements by administration officials suggesting that 1,600 uniformed American military personnel in Iraq would be subject to attack by Iranian-supported Shia militias were there strong American action in Syria.

Proclaiming a hostage situation in and declaring oneself utterly blackmailed is no way for a great power to deal with adversaries.  Seeking a nuclear agreement with is fine.  Preemptive surrender to Iranian-sponsored terrorism is not a policy worthy of the .  Force protection issues in Iraq can be managed by measures well short of capitulation.  There is no need for the administration to hand the Supreme Leader a club with which he can beat the United States and dictate its policy.

It is time for the administration to implement the president’s declared policy.  Indeed, it is past time.  This time presidential words on should be translated into action.