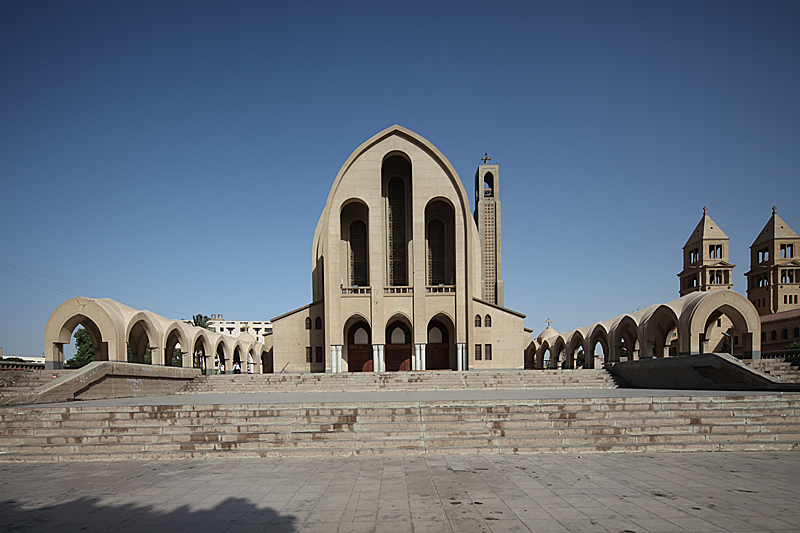 Inside St. Mark’s Coptic Orthodox Cathedral, Bishop Raphael, charged with performing the funeral prayers for the martyrs of El Khusus, was having difficulties finding a moment of silence for his prayers to be heard. In the early hours of Saturday, El Khusus was rocked by clashes, sparked by sectarian tension, leaving at least five dead and eight injured. The crowd’s chants were deafening, enraged at yet another incident. Four coffins lay before the Bishop and the sound from the speakers was continuously interrupted by his requests for silence so that the prayers could be heard. Next to the coffins there were myriads of mourners or protesters, however you wish to describe them. Most of those attending were standing on top of the wooden benches.

The prayers continued in unison with the chants. Towards the end, the Bishop asked those in the hall to join him in reciting the creed. For a brief moment, the power of the chants was transformed to prayer and even though the cathedral’s main church hall was not full, the words shook the building. The chants were sad, reasserting that Copts have claim to this land. They were accompanied by a chant, “With our souls, and our blood, we will save you, oh Cross.”

The same prayers recited for years within the walls of the Coptic Orthodox church was not enough to contain the anger. Even the powerful sermon delivered towards the end did not seem enough despite being on point. These restless hearts were looking for a new prayer, one that addresses their grief, but only chants were found.

In the midst of all this, calls to march to ministry of defense to ask for the protection of Copts were rejected by the protesters. After all, the martyrs of El Khusus were to be buried alongside Mina Danial and the Maspero martyrs killed by the military in October 2011.

On leaving the cathedral after the funeral prayers, the crowds of police surrounding the cathedral as the funeral procession entered were nowhere to be seen. I could see tens of people inside a small side street opposite the petrol station adjacent to the cathedral. It was not clear who they were exactly. Seconds later, I saw rocks and bottles flying off the roof of the building. As the crowd left the small street they roared in rage. Some men started to take it out on the cars parked below, but again it was not clear who they were

Upon inquiring as to how the incident started, a few at the scene explained that an officer, perhaps recognized for his brutality, was spotted and people chased him to beat him. He then took refuge in the building and that is why they were gathered outside it.

Thinking this would blow over, I left the scene, only to hear reports of birdshot and live ammunition being used, and teargas fired inside the cathedral. Upon returning later close to 6 pm, the Central Security Forces (CSF) were stationed outside the cathedral, doing very little. Inside the cathedral, the stench of teargas filled the air. The main gate was closed off. There was a lot of commotion and confusion. Bon fires were lit up and many youth stood on top of small buildings trying to fend off attacks from the outside. Clashes were intermittent.

Inside the cathedral’s worn down theatre, a makeshift hospital was set up. Once in a while one of the injured was rushed in after the sound of shots rang out. At one point Shura Council member Nadia Henry Gerges came in to the hospital to offer medical supplies. She was kicked out by the doctors who refused her contributions accusing her of being an instrument for the Muslim Brotherhood’s Guidance Office.

As time passed, the faces grew more and more familiar. Numerous faces seen at most protests showed up in solidarity with the Copts inside the cathedral. At times, Coptic Christians would gather together fifty meters from the battle lines and sing hymns and prayers. Once in a while the attacks would commence. Rocks and birdshot was exchanged by both sides.

The easiest way to understand what this attack means is to imagine a police sanctioned attack by civilian assailants on the Vatican or St. Paul’s Cathedral in Rome. What was once an underhanded attempt to subvert Copts in remote areas in Egypt, has moved to Cairo to manifest itself bluntly. That security forces are sanctioning an attack on a church is not new, but sanctioning an attack and firing teargas inside the most revered Christian structure in Egypt is shocking. It will not be surprising if no one is held to account. Who will arrest the police officers, who will put the state on trial? This perhaps sends the clearest message thus far to Copts, that these are sectarian security forces and that this is a sectarian state.

The Minister of Interior visited the Abbaseya area, during a lull in the clashes, but the clashes were on-going when I left. As I exited I found scores of CSF troops lazing around at the entrance of the small side street from which the attacks on the cathedral were coming. The assailants were safe from any attacks from outside the cathedral. Meanwhile Copts and Muslims inside the cathedral still searched for a prayer or entity that can offer them a comparable form of safety.

Wael Eskandar is a blogger and a writer for Egypt’s Ahram Online. He has written for publications like Daily News Egypt, Community Times and others.