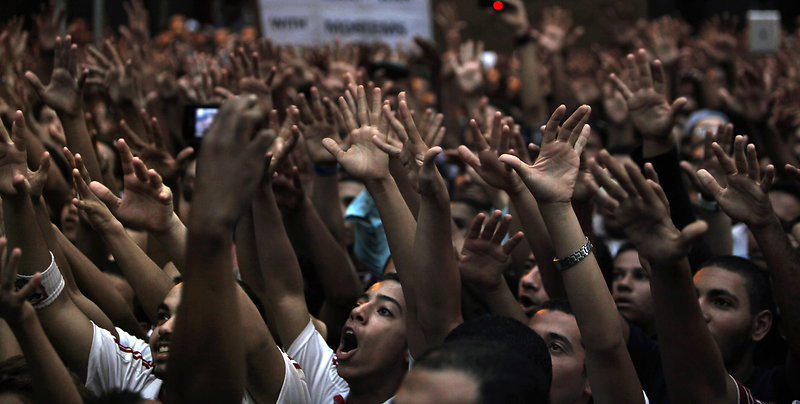 Word of a film originating in the United States that depicts the Prophet Muhammad having sexual intercourse and questioning his role as a prophet spread like wildfire across the streets of Egypt. Shortly thereafter, approximately two thousand protesters (many of them bearded, but with the front lines consisting mainly of the overzealous Ultras) appeared at the gates of the US embassy chanting religious slogans, scaled the embassy walls, tore down and burned the American flag, replacing it with one bearing swords and the phrase, “There is no God but Allah, and Muhammad is his prophet.” International news wires indicate graffiti painted on the walls saying, "If your freedom of speech has no limits, may you accept our freedom of action."

The news coincided with claims on his twitter feed that Christian Pastor Terry Jones would hold an "International Judge Muhammad Day" although the two do not seem to be related.

A CNN report indicated that “the incident prompted U.S. security guards to fire off a volley of warning shots,” the Cairo Embassy’s twitter feed denied the escalation of tensions that necessitated firing shots. In an attempt to calm the tensions, the embassy issued a statement condemning “the continuing efforts by misguided individuals to hurt the religious feelings of Muslims – as we condemn efforts to offend believers of all religions.” The Egyptian army and Central Security have intervened to prevent any further escalation.

Initial rumors blamed the film’s production and distribution on Coptic Christians abroad, particularly Maurice Sadeq, a radical Coptic lawyer based in the US who had announced that he would show the film on the anniversary of the 9/11 attacks. Egypt’s Christian community condemned the film, with the Muslim Brotherhood releasing a report of Copts in Egypt joining the protest in solidarity against the affront to religious sensibilities and who assert their refusal to allow others to speak for them. Oddly enough, distributors of the film have made it available on YouTube since July, and so it remains unclear why it sparked so much tension only now.