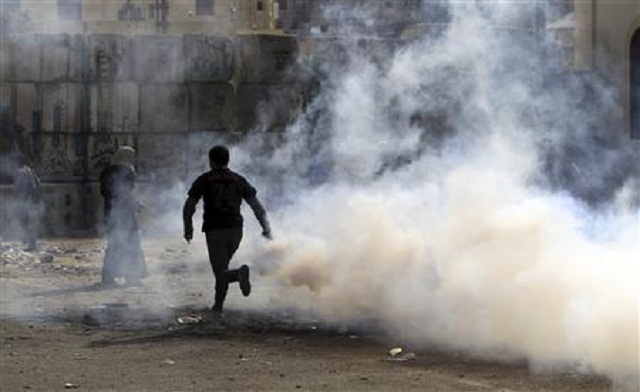 Two days ago, protesters took to the street commemorating the anniversary of the 2011 Mohamed Mahmoud Clashes, one of the bloodiest confrontations with the police in Egypt’s transitional phase, leaving over 50 dead. Today, Mohamed Mahmoud Street looks almost the same as it did exactly one year ago, with similar altercations taking place. Protesters are clashing again with police in downtown Cairo due to a long history of injustice. The police are thugs in uniform and nothing has been done to reform the police, despite claims to the contrary.

The Central Security Forces (CSF) uniform is associated with criminal activities. At the same time, the president and the prime minister are sending clear messages to the police, the military and to us that those in uniform can act with impunity and they won’t be brought to justice. This is a monumental confession from those responsible for upholding the law, and that’s why it makes no bit of difference if we wait for parliament, the constitution or Godot, because those who are supposed to uphold the law have promised criminals they won’t be brought to justice. At a time when injustice prevails, everything turns upside down. Islamists who once sounded like revolutionaries sound like feloul 1  today, and feloul who were once reactionary sound like revolutionaries. Not only do Islamists sound like Hosni Mubarak’s National Democratic Party (NDP), they say the exact same things with the exact same reasoning.

One example is someone who protested against Mubarak but had this to say about the clashes in Mohamed Mahmoud: “Frankly, I won’t be sympathetic with anyone who is killed while attacking police forces around the Ministry of Interior.”

Other than not being sympathetic to victims of needless police violence, one need only look at a map of downtown Cairo to understand that the clashes are not in the vicinity of the Ministry of Interior. But it is pointless explaining because that’s exactly what we told Mubarak’s supporters when they accused protesters of trying to storm the Ministry of Interior.

Others argue what is the point? What is there to be achieved from these clashes? There are no clear demands. Simply put, the clashes are a response to injustice and a way for people to deal with loss. That aside, the argument fails on another level. There was little point in reaching Tahrir on 25 January other than exercising our freedom. There was little point in taking down the police on 28 January other than protesting their brutality. People have expressed their sentiments without particular goals. That Mubarak stepped down is all well and good, but it wasn’t a result of planning, strategy or clear demands. The revolution never found justice and never found leadership. The arm chair pundits criticizing the clashes and people’s reactions don’t have a plan, not one that people want to follow anyway.

Clashes with the police must always be put into context. The Egyptian army killed Egyptians and betrayed their pledge to protect them and the constitution. The police betrayed their oath to uphold the law. Even with their uniforms, the police can be considered a criminal organization because they do not adhere to  the rule of law.

There is an argument that not all cops have broken the law and so they can’t all be held accountable for the mistakes of their fellow officers,  but it is senseless because they have not done their duty of bringing their criminal colleagues to justice. The same goes for the army. Those who have done nothing to prevent their fellow officers from killing Egyptians also broke their pledge. The argument of innocence does not hold particularly for the police and the army.

Understanding that the police and the army are complicit either through direct criminal offenses or inaction and dereliction of duties, the clashes make sense. In light of clear message by officials that they have no intention to reform the security sector, but rather are calling for a return to draconian laws, protesters  are vindicated when they conclude that an attack on them is justified.

Perhaps that sounds extreme. Perhaps what I’ve witnessed of injustices has lead me to this conclusion, but if you examine the situation closely without the dogmatic notions about the police and government, you’ll realize that we’re in a situation akin to occupation. The police falls far off the mark from what it should be and so does the government. Our situation is extreme, not this conclusion.  We are treated as expendable because we are not in uniform, because we don’t possess the guns, because we cannot give orders to those with the uniforms and the guns.

The most important fact in all of this is that injustice prevails. Uniformed men are constantly promised impunity. We’ve seen reconciliations with thieves, while revolutionaries thrown in prison. We’ve seen friends fall and die, and their murderers promoted. We’ve seen the dead called thugs by opportunistic political forces as they honor the military commanders who ordered the massacres. I cannot blame someone who lost a friend, a brother, a father, for going up against them. I cannot blame someone who is moved by these injustices.  We’ve been patient long enough to know that justice in Egypt does not come through the courts or judiciary. We still don’t know what it takes to bring about justice and that’s why protesters clash, and that’s why they’ll continue to clash.