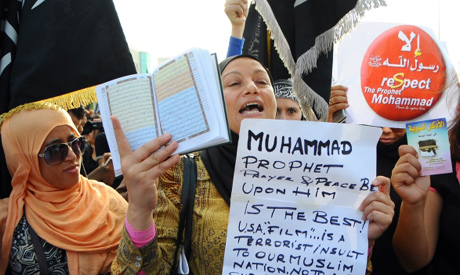 The offensive film, “Innocence of Muslims”, which depicts the Prophet (PBUH) in a derogatory light, is just another episode in a lengthy and absurd series of events dating back to 2005, which continue to show contempt for the feelings of two billion Muslims around the world. For that reason, I do not agree with those who view it as nothing more than an obscure film that was better ignored. Being lenient with this kind of hatred only gives way to more disrespect, which reverberates louder on each occasion.

It is impossible to accept the claims of those who want to convince us that freedom of expression in the United States has no limitations. Consequently, a logical question arises; what if an Arab or Muslim group produced a film praising 9/11? Would the US government consider this freedom of opinion or would it allow itself the right to stop the production of the film and arrest those behind it because of the risks it poses to society? They would certainly be well within their right if they did, and so we too consider an insult against our Prophet, or any other Prophet without discrimination, a disturbance to world peace.

The time has come for the Western world to realize the scale of fundamental changes in the balance of power, both regionally and internationally, since the Arab Spring. They have to understand that pressure points have increased among Arabs and Muslims, and that the age of swallowing insults and repressing the peoples’ wills has finally come to an end. The ultimate proof of this is the unity within Egypt’s different political currents, coming together to express condemnation of a film which violated the nation’s sanctities.

I think that the decision-making bodies in the US are aware of this shift and seek to contain it. I won’t dwell on Obama’s remark that Egypt is neither an enemy nor an ally, primarily because it is impossible to interpret any statements made by the president during this specific period outside of the context of electoral campaigning. It is normal that, in an attempt to outshine his rival Mitt Romney, he would offer up similarly rigid statements regarding the Middle East. On the other hand, we see members of his administration taking a softer tone, with statements contradicting Obama coming from both Secretary of Defense Leon Panetta and Secretary of State Hillary Clinton.

It is worth reiterating here that subjecting diplomatic missions to abuse is in violation of the law, with the most prominent of these incidents leading to the unfortunate killing of the American ambassador in Libya, Christopher Stevens. In this respect our Prophet (PBUH) affirmed that apostles (and their modern day equivalents of ambassadors and diplomats) must not be killed. There is also the Islamic tenet that says, “No bearer of sin shall bear the sin of another”. All of this confirms the thoughtlessness and cruelty of this unacceptable aggression. The Nour Party’s position regarding any demonstration or sit-in has never changed; we support the right to peaceful protest, as long as this right is exercised without disrupting the lives of civilians or damaging both public and private property.

With reports that some of the troublemakers that were arrested later confessed to receiving money in return for the attack on the US embassy in Egypt, one cannot help but see a connection with the failed calls to protest on August 24th. Bearing in mind that protesters attacked the security forces, deliberately engaging with them, both in the vicinity of the U.S. Embassy and Qasr al-Nil, the consequent altercations once again devolved into a confrontation between protesters and the Ministry of Interior.

I would not rule out the possibility that there are hidden players, attempting to intensify the crisis from afar, particularly since the worst acts of aggression against US embassies took place in Arab Spring cities. There are likely remnants resisting change in every capital, waiting for any opportunity to convey a weak image of these new regimes. This is made easier by the fact that in most of these governments, Islamist politicians have come to the forefront, making them an easy target particularly with an audience readily accepting these explanations.

Nader Bakkar is one of the co-founders of al-Nour Party. He is a member of the party’s Supreme Committee and is its official spokesman. Bakkar was also elected as a member of Egypt’s Constituent Assembly.