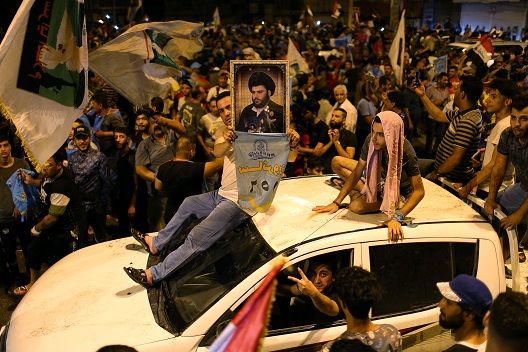 Muqtada al-Sadr—often dubbed a firebrand cleric—has come a long way from the days in 2003 when he was an outcast and a hunted man, to the victor in the 2018 Iraqi elections. Early results suggesting a surprising lead for Sadr are a personal vindication for him, certainly, but a challenge for Iraq’s political elite which for years was at a loss as to how exactly to deal with him, and a governance challenge for Iraq moving forward after the election to the next phase, the formation of a government.

“We are ready to work and cooperate in forming the strongest government for Iraq, free of corruption.” With these words, Muqtada, or MAS as he has often been called for short by western diplomats, has thrown the gauntlet to Iraqi party leaders to work with him or risk the wrath of millions of his followers in the country.

I recall hearing these exact words in 2003 from close associates of MAS who came to see me at the al-Rashid hotel in Baghdad’s Green Zone, now referred to as the International Zone, or IZ for short. The two gentlemen sought me out, recognizing me from my appearances on Arab satellite TV as a spokesperson for the Department of State in Baghdad. They told me that they sought me out because they did not know who else to ask to see who might actually accept to see them.

In those days, MAS—a black turbaned cleric—was a young rebel rouser, heading a ragtag militia that, among other acts of violence, was accused of murdering senior Shia cleric Abdelmajid al-Khoei who had only just returned to Najaf from his exile in London.

Rumors circulated among Iraqis that MAS was reportedly witnessed killing Khoei—a charge he denies and for which there is no corroboration. Eye witnesses say that he at least let the bludgeoned Khoei expire in front of his doorstep, refusing to take him in or to rush him to a hospital for treatment.

For the United States, MAS was to say the least a nuisance, agitating against the US invasion of his country. On hearing me relay the message from MAS associates that their boss wanted to discuss playing a constructive role in Iraq’s Governing Council (IGC), a senior US official, replied, “We don’t want to talk to him, we want to kill him.”

Members of the Iraqi Governing Council (IGC), leaders of the opposition to Saddam Hussein who returned to their country in the wake of the US invasion, were themselves at a loss on how to deal with MAS. On the one hand, they did not want him among them as a member of the IGC, and on the other they strongly advised against killing him. The killing of a Shia cleric, a descendant of the Prophet with a large unruly following, could have serious repercussions.

Fast forward 15 years, and poverty and government corruption are still high on the list of Iraqi citizens’ complaints, and were leading issues in this election. Sectarianism and foreign meddling, by both the US and Iran, have also been nagging issues, especially in the wake of the defeat of the Islamic State (ISIS), and the need to return to national reconciliation among Iraq’s Shia, Sunni, and Kurdish communities.

The low turnout, reportedly around 44 percent, indicates malaise among many voters, who may have turned away from major traditional parties and personalities and apparently favored the populist slogans of MAS, who campaigned precisely on an end to corruption and a serious effort to eradicate poverty. Grand Ayatollah Ali al-Sistani, seemed to indirectly endorse MAS by criticizing elected politicians for failing to meet the basic needs of the Iraqi people since the fall of Saddam.

Sistani, Iraq’s leading religious scholar and a spiritual guide to millions of Shia Muslims, not just in Iraq but also in the region, has counseled a non-sectarian agenda for politicians—an agenda with which MAS has ironically become associated in recent years. In rejecting the Velayat-e faqih concept, the principle upon which the Islamic republic of Iran was founded which enshrines the rule of religious scholars, Sistani has also, probably inadvertently, lent further support to MAS’ defiance of Iran’s influence in Iraq.

If MAS ends up indeed as the king-maker in the next phase of government formation in Iraq, his will be a strong voice in Iraq’s parliament and Iraqi political life for the next four years. Even though this prospect sends a bit of a shock wave through US, Iranian, and traditional political circles in Iraq, it may not be totally without promise.

Muqtada’s slogans do not in themselves portend ill for either future domestic or foreign policy trends. Dangers may however lurk in the populist style and the lack of any governance experience of either MAS or any of his known advisors. He will have to show considerable maturity and political skill in steering a new legislative agenda for his country.

His first test will be in the alliances he has to make in order to govern. Forming a coalition with the outgoing Abadi may well be his best bet because of the experience Abadi would bring with him and his moderation, especially when compared to former prime minister Nouri al-Maliki and Popular Mobilization Front leader Hadi al-Ameri, but it certainly will not be his only choice. He will also have to choose his words carefully in the future and steer away from stirring up his public. Sunnis and Kurds will also be watching his next moves carefully. As has been the case since the fall of Saddam, Iraq’s main challenge will remain one of governance.

Dr. Nabeel Khoury is a nonresident senior fellow at the Atlantic Council’s Rafik Hariri Center for the Middle East. He served twice in Morocco, he was the Press Attache at the U.S. Embassy in Rabat from 1994-1997 and again as U.S. Consul General from 1998-2002.