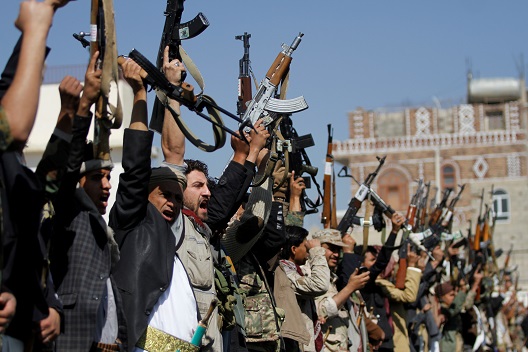 The end of Saleh-Houthi alliance marks a new chapter in Yemen’s intractable conflict. Two weeks after Saleh’s death, warring parties intensified their military escalation, increasing an already abominable human cost. Despite Saleh’s legacy of subversive tactics and coercion, his death undermines efforts to resolve the conflict. The Houthis, an irrational movement lacking in political experience, make for a highly emotional and unreliable party at the negotiating table. With the passing of Saleh, the ultimate pragmatist with longstanding political and diplomatic ties both locally and internationally, an opportunity has passed with him. In a post-Saleh Yemen, the question remains: is a political solution still feasible?

The most serious issue with the negotiation effort is its absence for more than a year. Days before his death, Saleh presented himself as a negotiator, expressing his readiness for talks with Saudi Arabia. Had he survived, those talks would have materialized through the UN framework, UNSC resolution 2216, which called on Saleh to change his destabilizing action, facilitate disarmament of the Houthis, and return to the National Dialogue Conference’s outcomes. Since his death, the UN Security Council has not passed an amended resolution in line with the recent developments; it instead had a closed-door meeting on the situation and simply called for de-escalation.

With the apparent lack of urgency in reinventing the political solution, on-the-ground fighting has only escalated and new emerging alliances appear to herald further military escalation. Despite its necessity, discussion about a new political solution to the conflict seems premature. Not only has the increased appetite for military competition undermined the prospects for a negotiated solution, but so does the Saudi-led coalition’s flawed tactical approach that aims to unify Yemen’s local factions against the Houthis.

While neither Saudi nor the Houthi camps can claim military superiority, the Houthis have gained significant military strength over the course of the war. After overtaking Sana’a in September 2014 with Saleh’s support, the Houthis captured valuable materiel from the disoriented national army. Emboldened by their initial victories, Iranian support, and lust for total control, the Houthis met any dissent with violence. Saleh’s betrayal in their eyes justified his undignified execution—and the subsequent crackdown on anyone allied with him. Local press reports also describe Houthi threats and shelling of dissident and pro-Saleh tribes.

Operating on a winner-take-all mentality, the Houthis’ lack of sophistication and nuance has consequently undermined local tribal diplomacy in resolving domestic conflicts. With little regard for even local negotiations, the chances they might engage with international negotiators in good faith appear unlikely.

On the opposing side, a key member in the Saudi-led coalition has taken advantage of the new normal. The United Arab Emirates (UAE) has taken steps to realign itself with an old enemy, the Islah political party (a Yemeni version of the Muslim Brotherhood), in the fight against Houthis. This marriage of convenience comes as a sequel to Saleh’s short-lived marriage of convenience with his old enemy, the Houthis. This latest shift suggests that the Saudi-led coalition aims to unify Saleh’s General People’s Conference (GPC) forces, Yemen President Abdrabbo Mansour Hadi’s forces, the Southern Hirak’s forces, and Islah to counter the Houthis. All these factions, however, hold deep historical animosities towards each other, which threatens the effectiveness of such mobilization.

Such marriages of convenience between Yemen’s different factions have allowed each to survive in a highly volatile political climate. Each party reorders its own interest, depending on the political and military dynamics. If any lesson is to be learned from Saleh’s death, however, it should be the eventual collapse of these loose alliances and their potential to backfire.

Given the current configuration, the conflict in Yemen will not likely end in a formal negotiated settlement through the same existing UN framework born out of the National Dialogue and previous UN resolutions. The nearly four years of civil war and Saudi-led military intervention have exacerbated unresolved animosities between Yemen’s different factions. Saleh had killed the godfather of the Houthi movement, Hussein Bader al-Din al-Houthi, which partly motivated his assassination. Islah is asked today to come to good terms with the remaining GPC forces, despite a desire to retaliate for GPC hostility against the party during Saleh’s alliance with Houthis. Southern forces are asked to be the backbone of the anti-Houthi fighting force, but still harbor a separatist streak. Any peace effort that dismisses the growing divisions and historical grievances is doomed to fail. A political solution must prevail eventually, but only if it seriously considers these old and newly born challenges.

While warring parties are reluctant to lay down their weapons, people in Yemen face widespread famine and an unprecedented cholera outbreak. A tougher international approach to finding a political solution in Yemen could nevertheless still help avert even greater tragedy in Yemen. There is both a moral and strategic interest in stabilizing Yemen.

Image: Photo: Tribesmen loyal to the Houthi movement hold their weapons as they attend a gathering to mark 1000 days of the Saudi-led military intervention in the Yemeni conflict, in Sanaa, Yemen December 21, 2017. REUTERS/Mohamed al-Sayaghi