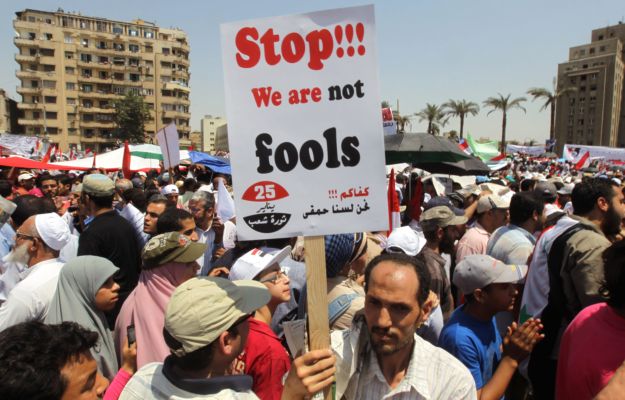 Political analysis alone cannot adequately explain the troubled state of Egypt’s transition.  The current crisis is rooted as much in social psychology as it is in politics. As Egypt’s political forces engage are polarizing around the volatile debates over the new constitution and Egypt’s next president, it appears that the population is collectively suffering from a phenomenon known as change blindness. This condition is defined as “a phenomenon in visual perception in which very large changes occurring in full view in a visual scene are not noticed.” In other words, it explains how humans can fail to notice major changes occurring right in front of their eyes and respond only after a delay or not at all. Experiments have shown that brain often does not react to change, and instead tends to portray what the observer expects to see, even if it changes in reality.

Could “change blindness" be one explanation for what happened to Egyptians after the takeover of the Supreme Council of the Armed Forces (SCAF) from Mubarak? Or is it “selective listening” to when then-Vice President Omar Sulieman announced the hand in power statement? Or is maybe a selective reading and understanding of the country’s history that has resulted in the public’s failure to anticipate or combat the damaging consequences of protracted military rule?

This is by no means an accusation against one single group or institution in Egypt. It is a collective failure to comprehend the dramatic change of 2011 from all parties involved, whether it is the SCAF, political parties, or general public. For 60 years, Egypt has been governed through military-backed regimes. When Egyptians took to the streets in January 2011 to demand change and toppling the regime, they only succeeded in removing the “civilian” mask that was running the country.

Fourteen months since the January uprisings, it is more evident that though Egypt’s dictator fell, the dictatorship remains. Though the transfer of power from Mubarak to SCAF was unconstitutional, the people welcomed it out of their wide respect for the military, helped along by the army’s neutral stance during the 18 days and claims to have been the only institution that “sided” with the people against the Mubarak regime. But since then, the SCAF has further consolidated the power of the regime, maintaining economic and political privileges behind the façade of supporting a transitional phase into democracy. The failure of the military junta to realize and consider the people’s aspirations over the past year has left the country in political stagnation and strife, a deepening economic crisis and social upheaval.

At the same time, the old and new political forces have also failed in maintaining momentum and unified support for the revolution’s demands. Some have played upon the religiosity of the people to promote certain ideologies while being co-opted by the ruling generals to provide a civilian cover-up to its rule, and others have disastrously failed to connect with the public and participate effectively in the transition. The distorted political process has left the political forces as well as the general public divided and fighting the wrong battles.

On the other hand, the general public – revolutionaries and the silent majority – have also contributed to the chaotic transitional process. The lack of unity and clear vision from the political elite and ruling generals created misunderstanding and confusion for the people. It left the Egyptians to create their own interpretation of the events and decisions taken, which by default increased the rift between certain segments of the society.

Despite all the events that have taken place in Egypt thus far, now is not the time for pessimism. However, Egypt is long overdue for a wake-up call. Egyptians need to realize their weaknesses to be able to overcome them. We need to understand that democracy isn’t created overnight, and it’s not only the rule of the majority but also the respect for the opinions of the minorities. Change blindness, selective reading or listening are human weaknesses; and we all have to admit our faults and differences to able to start building the "new" Egypt.