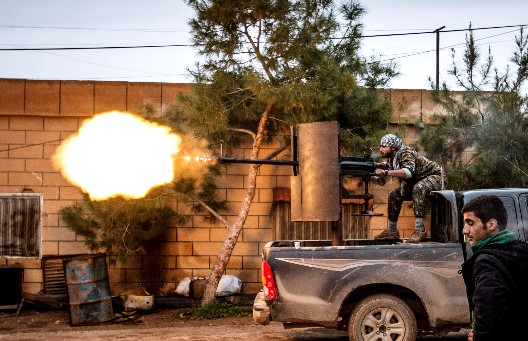 Kurdish forces in late January expelled fighters from the Islamic State (ISIS or ISIS) from Kobani in northern Syria. They later retook villages surrounding the city, reportedly without much fighting. With the radical organization’s losses mounting, observers of the Syrian conflict should ask the question: “What is next for ISIS?” Is it still baqiya (remaining) and tatamaddad (expanding), as their official slogan declares, or is it on the defensive, as claimed by President Barack Obama?

Several sources have noted that US-led airstrikes have not halted ISIS’s in expansion in Syria. The long and exhausting battle of Kobani demonstrated ISIS’s resilience, its determination to hold on tightly to areas under its control, and its strength in guerilla warfare. As such, the US-led coalition should not consider Kobani a great strategic military victory for the Kurdish forces; at best, it represents a symbolic victory that might unify Kurdish and Syrian rebel forces in future fighting against the terrorist organization. If they succeed in unifying against ISIS, Kobani could mark a historic moment in the victory against ISIS.

Shortly after Kurdish forces retook Kobani, ISIS pushed towards rebel-held areas in north Aleppo, particularly in the town of Marea (25 miles north of Aleppo and 20 miles from ISIS-controlled al-Bab), suggesting that ISIS might initiate large-scale attacks in Aleppo. But due to coalition airstrikes that limit its mobility, ISIS cannot conduct large-scale offensives, as it did in Mosul in June 2014. Forced to adjust to new military realities, ISIS must now reconsider their expansion strategy.

ISIS appears now to have adopted a two-pronged approach. As demonstrated by recent small-scale attacks in Homs province and attacks on Kurdish positions in al-Hasakah province, the group’s military strategy aims to draw attention away from their strongholds in Deir Ezzor and Raqqa and instead threaten their enemies’ gains. In Homs, the ISIS advance has had the unfortunate side effect of creating splits among FSA ranks between support and opposition.

The group also aims to consolidate its territory such that it does not suffer another loss like Kobani. ISIS’s recent withdrawal from Kobani villages, relocation of fighters from Aleppo province toward the border towns of Tel Abyad in Raqqa province in northern Aleppo, suggests that ISIS has refocused its strength in the north in an attempt to fortify its position. Activists in Raqqa claim that ISIS fighters have already built fortifications and dug tunnels in and around Tal Abyad. By securing Tal Abyad, ISIS takes advantage of the recent breakdown in the unofficial truce between Kurdish and regime forces while forcing Kurds allied with FSA-affiliated Raqqa brigades to fight on ISIS’s terms: another long and exhausting guerilla warfare.

By strengthening its control over border towns, ISIS also consolidates key routes for supplies, commerce, and reinforcements to and from strongholds, including Raqqa and Deir Ezzor. The area further serves as an ideological and geographical front in ISIS’s nation-building project. The potential loss of Tal Abyad or Jarabolus would devastate ISIS’s ability to govern, threaten the flow of equipment, and handicap its capacity to fight on more than one front. ISIS is completely aware that the loss of border towns will not only negatively affect the already tense relations with locals in Syria, but also strike a blow to the group’s morale.

The relative absence of rebel infighting in the south, the cooperation between Southern Front brigades and Islamic groups, the lack of a ISIS stronghold (a la Raqqa) or important reinforcement routes, and recent regime gains in the area indicate that ISIS is vulnerable on its southern front. As such, it will not likely initiate any serious attempt to engage in a struggle for control over the area. A series of assassinations against ISIS’s police force (al-Hisbeh) by al-Kafan al-Abyad (the White Shroud) and similar groups have forced ISIS patrols to partially withdraw from the towns of Mayadeen and al-Bokamel in Deir Ezzor province.

The relocation and withdrawal from fighting positions in Kobani and Aleppo does not necessarily suggest that “ISIS on the defensive.” Rather, it demonstrates the group’s adjustment to changing circumstances on the ground, taking advantage of the situation wherever possible. Coincidently or not, these strategic and tactical calculations by ISIS are closely related to the group’s ideological-geographically ideas of the caliphate they are trying to build. By simply perceiving ISIS as monsters or making the fight against them a dichotomy between who is on the “offensive” or “defensive” distract from details regarding the actual tactical, strategic, and ideological motives behind ISIS’s campaign.

Jeppe Sorensen is a research intern with the Atlantic Council’s Rafik Hariri Center for the Middle East.

Image: A fighter of the Kurdish People's Protection Units (YPG) fires an anti-aircraft weapon from Tel Tawil village in the direction of Islamic State fighters positioned in the countryside of the town of Tel Tamr February 25, 2015. (Photo: Reuters)