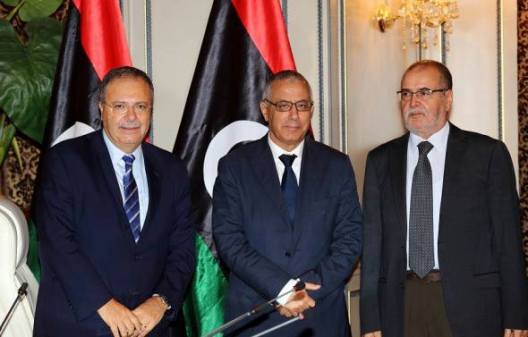 Libyan Prime Minister Ali Zidan has announced the launch of a national dialogue initiative to address some of the most important challenges hindering the country’s progress toward a pluralistic and transparent political system. It is the first sensible initiative taken since Qaddafi’s ouster to try to resolve the political paralysis and security crises that have gripped Libya. The success of this initiative will determine whether the country spirals further out of control and risks becoming a failed state or whether it stays the course on the road to democracy, even if it is rocky. Carrying out a national dialogue will be a heavy lift. Now that the Libyan authorities have themselves called for one, however, their political will must be buttressed by the international community’s diplomatic and technical support to realize the endeavor. There is too much at stake in Libya for its international partners to ignore this initiative.

Libya’s numerous problems are rooted in the 2011 revolution and its immediate aftermath—and specifically the marginalization of a significant segment of the Libyan population that supported Qaddafi. This context underscores the importance of a national dialogue. The war to liberate the country from Qaddafi’s dictatorship was fought not by a national liberation army but rather a fragmented network of local and regional fighter units, comprised largely of civilians who took up arms against the regime. The political body guiding the revolution, the National Transitional Council, was itself not a cohesive organism, but rather the product of local and regional elements that were united only by the desire to overthrow a much-hated Qaddafi. They not only fought against an abhorred dictator supported by mercenaries, but a good chunk of the Libyan population that had benefited from the Qaddafi regime as well.

Exacerbated by a legacy of demoralized and dysfunctional bureaucracies under the former regime, this fragmented and disparate character of the revolution has haunted the country as it embarked upon its transition. The first government of Abdel Rahim al-Kib was paralyzed by the lack of popular legitimacy since it did not come to power through the ballot box, feared accusations of corruption, and was overwhelmed by the challenges it faced in the immediate post-revolutionary, post-conflict situation. The country’s leaders failed to seize many opportunities during this critical period when they should have initiated task forces to jumpstart the economy and create an environment conducive to a political transition. Al-Kib himself would boast that his government did not utilize even 40 percent of the budget at its disposal. He said this to demonstrate fiscal responsibility; however it revealed that he neither understood nor appreciated the importance of taking action in the immediate aftermath of the revolution to tackle national reconciliation, rebuild destroyed infrastructure, and absorb militias into a national security apparatus. With such precious time wasted, embarking on the democratic transition was delayed, and Libya’s first post-revolutionary elected institution, the General National Congress, and the government it appointed inherited the same magnitude of challenges from the year before. These two institutions exhibited the same inactivity, paralyzed by incapacity to act, a lack of human resources, bureaucratic constraints, a disrupted economy, the absence of a clear distribution of powers among institutions, and mounting insecurity throughout the country launched by the revolution’s numerous adversaries.

Inevitably, all of this has led to a progressive delegitimization of the state institutions. The problem has become much more acute as the country witnesses a series of targeted assassinations, rising criminal activity, and illegal pressure imposed by militias on the government to pass laws convenient to their interests. A particularly worrisome development is that the interests of militias and the interests of political groups are gradually fusing, thereby further straining government institutions.

At this point, Libya stands at a fork in the road: in one direction, centrifugal forces and opposing interests overwhelm any prospect for national unity and the country plunges ever closer to a failed state; in the other, the government acts boldly and exerts leadership in the political and economic realms to keep Libya on track toward fulfilling the promise of its revolution. After months of headlines about Libya’s deteriorating security and political situation, it seems that Prime Minister Zidan is finally getting his act together and has gathered the courage to lead the national dialogue initiative. Such an undertaking is in fact the only way to substantively and peacefully resolve most outstanding issues that have compounded throughout Libya’s history fraught with contentious cleavages.

While the details of the plan remain scant and confidential, it seems that the prime minister has appointed a committee to oversee discussions on fundamental questions such as national identity, national reconciliation, and citizens’ rights and duties. The committee is also expected to maintain strategic dialogue on matters related to disarmament, national interest, and the form of state. The members of the committee will be non-partisan individuals from civil society who will devote their time and competence voluntarily to the mission, receiving no financial rewards or privileges of any kind. The ultimate objective is to derive from such discourse a national pact signed by all parties. This pact, in turn, will serve as the basis for the drafting of a new constitution by a committee that will be formed in accordance with the electoral law passed earlier this summer by the GNC.

By simply starting this initiative, Libya’s leaders and people will have achieved a great success for two reasons. First, it would obligate all cross-sections of society—from political groups to militias to civil society organizations—to declare a clear and decisive commitment to give up violence and participate in a peaceful construction of the new Libya. This move in and of itself would expose and marginalize the extremist forces that, despite their vehement expressions, do not have Libya’s best interest at heart. Second, it would commit the state institutions—both the government and the GNC—to adopting an inclusive, transparent, and comprehensive action plan to carry out the national dialogue. This effort would pay dividends in rebuilding lost legitimacy and credibility in the eyes of the Libyan people.

Having called for a national dialogue, the Libyans have signaled their willingness to take on this challenge. Their readiness to do so, however, is a different matter. It is critical that at this delicate moment, the international community provide whatever support it can to Libya’s institutions. The UN Support Mission for Libya has said it is prepared to offer political support and technical expertise. NATO countries that played a vital role in Libya’s liberation should use their political and diplomatic capital and stand firmly behind Zidan and Libya’s leadership to support them in this endeavor. The same is true for the Arab League and the African Union. There is a lot at stake, and Libyans and the international community have a shared interest in seeing this strategic North African country make gains toward becoming a stable and peaceful democracy.

Karim Mezran is a senior fellow with the Council’s Rafik Hariri Center for the Middle East specializing in North Africa.