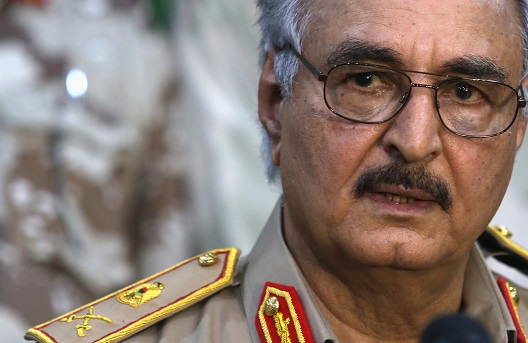 The Benghazi Defense Brigades (BDB)’s recent successful offensive conducted against the Libyan National Army (LNA) in the Gulf of Sidra—in which it seized the oil ports and terminals of Ras Lanuf and Es Sider—leads one to consider its effects on the Skhirat agreement. This is the agreement that produced the Libyan Political Agreement (LPA) and a Presidential Council (PC) and was negotiated under the leadership of the United Nations by a plethora of Libyan actors, with support from most countries involved in Libya.

The agreement immediately encountered difficulties that prevented it from being fully implemented, in particular from Field Marshall Khalifa Haftar, a former Qaddafi general who returned to Libya in 2011. However, recent events suggest that Haftar’s position has weakened, which might pressure local and international actors to force him to negotiate.

Libya’s House of Representatives (HoR, the parliament in Tobruk), partially approved the LPA and the PC after the Skhirat agreement was signed in late 2015. However, the HoR refused to ratify Article 8 of the agreement, which would have transferred oversight of the Libyan National Army (LNA) – a ragtag army of former Qaddafi army units, local volunteers, tribal militias, and Salafi groups that Haftar commands—to the PC. Moreover, the HoR also failed to ratify the PC’s proposed cabinet, the Government of National Accord (GNA), which left orders coming from GNA Prime Minister Fayez al-Serraj technically null. Therefore, the HoR’s only partial approval of the LPA and the PC/GNA made the Skhirat agreement toothless.

In recent months, it seemed that the days of the PC/GNA were over and the demise of the LPA inevitable, particularly as Haftar, in command of the LNA, took control of Libya’s eastern province and imposed himself as a strongman that could establish order and security in the country.

The positioning of the most relevant international actors also seemed to point to this conclusion. Emirati and Egyptian support for Haftar seemed definitive, and Haftar’s newly established ties with Russia lent the field marshal further strength. France also balanced its official support for al-Serraj with pragmatic support for Haftar on the ground, while rumors the new Trump administration is considering the removal of US support for the PC in favor of Haftar. Therefore, the ascent of Haftar seemed inevitable.

But Libya is a country of many surprises. Early this month, the BDB, a coalition of Islamist groups formerly based in Benghazi, carried out a counter-attack, supposedly with the support of some militias from Misrata, against the LNA to recapture the oil terminals and ports located in the Gulf of Sidra. The BDB is taking efforts to weaken Haftar, as it hopes to march further east to Benghazi and take back the city from Haftar’s forces.

While the LNA had been controlling the facilities in the Gulf of Sidra, it was doing so on behalf of the Libyan National Oil Company (NOC) and allowing the oil profits to go to the Central Bank of Libya headquartered in Tripoli. Haftar was in effect pragmatically controlling the oil from the Gulf of Sidra while allowing its revenues to profit the PC in Tripoli. In doing so, Haftar could present himself as a patriot acting in the national interest of the country.

The BDB’s attack proved to be surprisingly successful. The LNA forces were forced to retreat to a defensive line at the border of the oil terminals in Brega. The BDB leadership immediately issued a communique relinquishing control of the terminals to the Petroleum Facilities Guards (PFG), an entity loyal to the PC/GNA, led by Idriss Boukhamada. In effect, the PC/GNA’s sovereignty of the oil terminals, therefore, remained substantively unchanged. The goal of the BDB’s attack on the LNA’s position in the Gulf of Sidra was not to take control of the oil ports, but rather to weaken Haftar.

The situation at this point is fluid. The LNA has incurred a military defeat that, though not fatal, demonstrates the weakness of its structure and incompetence of its leaders. Haftar has organized a build-up of his troops in Brega to launch a counter-attack and recuperate control of the lost positions. The problem is that his forces will be attacking the PFG, nominally under the control of the PC, not the BDB. This attack would thus constitute an attack against Libya’s internationally recognized government, which in turn could trigger a military reaction by the international supporters of the PC/GNA.  An added factor is the ambiguous behavior of Egypt, a principal supporter of the LNA, whose initial silence and late response to these maneuvers were baffling.

Haftar is in quite a difficult position. If he tries to use military force to retake the territory, he risks causing an international reaction against him because the international supporters of the PC/GNA would be forced to come to its aid.  But by doing nothing he risks looking weak and is ceding territory to the BDB.

In the meantime, the HoR, despite the absence of a quorum, has voted to annul its January 2016 decision approving the LPA and cease any negotiations with the PC/GNA, further complicating matters. Real questions regarding the legality of the HoR also remain, as many say the parliament has surpassed its mandate, which was extended only to approve the LPA. Following its refusal to ratify the GNA, the HoR’s mandate has expired.

Nevertheless, the new balance of forces on the ground could offer some hope. Haftar has now seen his military dominance reduced, while the PC/GNA’s authority has increased enough to give al-Serraj more leverage in his attempts to renew negotiations aimed at finding a solution to the crisis. He may be able to use this leverage to pressure Haftar to come to the negotiating table. However, without pressure from his international supporters, Haftar will likely refuse to negotiate from his current position of weakness, instead thinking that he can recoup his losses.

The BDB re-taking of the Ras Lanuf and Es Sider oil ports and relinquishing control to the PFG has breathed new life into the PC/GNA and will force Libya’s various actors to readjust their plans. Yet this could also be the first step towards the fall into a full-fledged war, with Haftar’s troops trying to reconquer the oil fields. This could also trigger an international chain of reaction, as various international proxies intervene on behalf of their clients. Nevertheless, there is still a window of opportunity, and it is up to the various international actors to pressure their allies in Libya towards negotiation rather than engagement in a destructive war.

Image: Photo: Then-General Khalifa Haftar speaks during a news conference at a sports club in Abyar, east of Benghazi May 21, 2014. Growing frustration over the reality of life in eastern Libya, which contrasts with the promises of politicians, is feeding support for Haftar, who has set himself up as a warrior against Islamist militancy and who some also see as their saviour. Picture taken May 21, 2014.