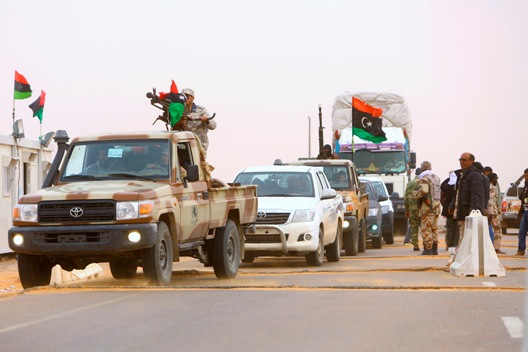 As Libya faces numerous challenges with the existence of federalists and militia groups, the question of decentralization grows in urgency. Libyans need to bolster local government in an effort to leave their past behind and meet their everyday needs, but lacks the adequate legal and constitutional framework to ensure better governance. As Libya struggles to fill the remaining seats in the Constitutional Committee, it must also consider the language it plans to adopt to protect the decentralization process.

The move towards local governance emerged during the 2011 revolution when local councils arose to handle city affairs, an arrangement that continues today. Libyans welcomed the change. With the former regime centralized in Tripoli, citizens traveled inordinate distances from all over the country to complete tasks that they could have handled in their own cities, including basic bureaucratic services like stamps and signatures that could easily have been provided in other cities.

Believing that managing the country on the local level can be more effective than working on the national level, the General National Congress (GNC) passed the local administration law in 2012 to reorganize the distribution of authority by dividing the country into governorates (muhafazat) and districts (balidiyat). Now, under this law (59/2012), one hundred district councils tend to these everyday needs. By decentralizing administrative tasks, the Libyan government hopes the councils can ease the burden of maintaining safety and security and expand its capacity to deal with other priorities.

The law, however, has weaknesses that undermine the objective of creating local government structures. First, the new law does not specify the criteria necessary to classify a city as a district—whether in geographical, economic, historical terms, or otherwise. This ambiguity results in an arbitrary mechanism for creating districts, without taking into account the differences of size, capacities, and resources between these districts.

Second, the law does not consider how the currently designated one hundred districts undermine the central government by draining its resources. Today the state pays nearly 24 billion LYD in salaries alone, without accounting for possible additional districts. That figure represents nearly 40 percent of the public budget, according to a report released by the Planning and Finance Committee at the General National Congress (GNC) session on February 11, 2014. These hundred districts have already led to a dramatic increase in the budget following the Iraqi wage pattern, which currently follows for a federal system and pays nearly 80 percent of its budget in salaries despite an absence of services.

Given that Libya (a rentier state) depends almost entirely on oil revenue, these districts will rely on the central government to cover their expenses. This dependence occurs for a number of reasons:

Lastly, these recently-formed districts suffer from a lack of experienced personnel who face serious challenges in planning, modernization, and administration. Considering Libya’s inefficient bureaucracy, in which both the government and the GNC determine the budget, inordinate delays in funding these districts can lead to greater inefficiencies in delivering basic services.

Local government is the key to success in Libya, but the government and its international partners must take measures to ensure this model’s success. Intelligent, well-trained, and effective decision makers must administer these local governments to maximize their ability to ensure the safety and control of Libya’s cities. Training programs sponsored by the government and international organization partnerships in cooperation with Libya’s nascent civil society can strengthen local state institutions such that citizens feel confident in officials’ capacity to help them. If local governments remain disorganized and poorly managed, unable to provide citizens with the services that they expect, Libyans will simply go straight to the central government, rendering local governance obsolete.

Local governments can and must fund themselves through tax collection. Budgetary dependence on Tripoli’s decision-making will mean that centralization will not be eliminated, nor can administrators make independent decisions based on local needs. The absence of other sources of funding will hold local governments hostage to the central government, as it could take months to determine the budget at the current GNC, or in any new legislature. Taxation would not only stir constructive competition and creativity between districts, it could build a healthy local political culture. It would also buffer local government from central government financial shocks that would otherwise hinder local capacity.

Establishing credible local governance structures will need a better defined legal and constitutional framework. Constitutions typically stipulate the limits of government, but currently, jurisdictions for the central and local governments remain undefined within a constitutional vacuum. Those calling for decentralization in Libya demand guarantees from the recently elected constitutional drafting committee. The body will have to address a range of questions, including how to clarify delineation of each district’s borders to resolve jurisdictional disputes.

Ultimately, local government can greatly improve the lives of ordinary Libyans and encourage conditions to drive the political process forward, but only if it receives the capacity, resources, and autonomy to operate effectively. A failure to provide for local government will lead to an inability to provide services and a reinforcement of public distrust in state institutions. This could spark a return to centralized government at best. In any case, a failure to decentralize would greatly damage the political transition as Libyans lose faith in the integrity of the state.

Mahmoud Bader, a lawyer, is the cofounder and board member of the H2O Team in Libya, an NGO dedicated to conveying the views and voices of the Libyan youth to policymakers.

Image: Heavily armed vehicles belonging to the military council of the self-declared autonomous region of Cyrenaica, which are deployed to protect oil ports, drive past at a checkpoint, near the east of the city of Sirte March 14, 2014. (Photo: Reuters)