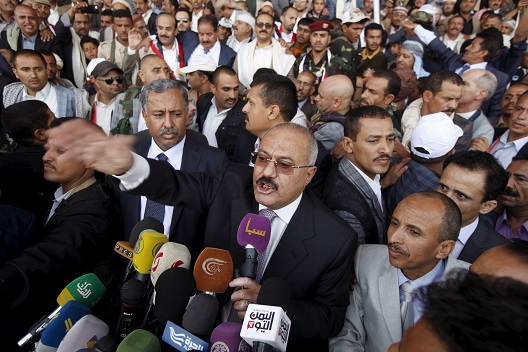 Timing, frustration with the Houthis, and a determination to ensure he is not sidelined have prompted a shift in Saleh’s calculus. Having demonstrated his longevity to both the Saudi-led coalition and his supporters, Saleh may be signaling his readiness to abandon the Houthis in a bid to secure his political future.

Saleh ruled Yemen for thirty-three years until he was ousted in February 2012, following the outbreak of prolonged protests against his rule in 2011 during the Arab uprisings that swept through the region. The protests left Yemen teetering on the brink of civil war. Conflict was only averted due to the Gulf Initiative, which was launched in November that year and led to Saleh stepping down in exchange for immunity from prosecution for the use of lethal force against protesters.

No longer in office, Saleh continued to exercise control over several levers of power, such as sections of Yemen’s military and security apparatus that remained loyal to him. He then formed an alliance with the Houthis, an armed opposition group from North Yemen, and supported their capture of Sanaa in September 2014.

The Houthis and Saleh are not fully aligned. They are former adversaries and have fought six wars against each other, from 2004 to 2010. Their alliance is a marriage of convenience, bound by a common enemy they are currently fighting: the internationally recognized Yemeni government headed by President Abdrabbu Mansour Hadi, and the Saudi-led coalition supporting Hadi’s attempts to regain control of the country.

Since the coalition’s military intervention in March 2015, Saleh has shown defiance in the face of pressure, and expressed a determination to secure a decisive military victory for the Houthi-Saleh bloc. In February this year, however, his rhetoric changed. In what appeared to be a reversal of position, Saleh called on the GCC to assume greater political responsibility to help bring an end to the conflict. This was reportedly the first time he had openly called on the GCC to intervene politically since 2011, at the height of the protests against his rule.

Privately, Saleh is said to have partly attributed his fall from power to the willingness of the GCC states to abandon him during his hour of need. He was particularly incensed with Saudi Arabia, which had supported his regime until the 2011 protests due to his perceived ability to prevent Yemen’s internal problems from spilling across the Saudi-Yemeni border. Thus, Saleh’s praise for the Gulf initiative in February this year appeared out of character. It also raised questions about why he would now be in favor of a deal that had led to him stepping down.

Nevertheless, after this appeal in February, Saleh outlined and reiterated both his readiness and the need to engage in dialogue with Saudi Arabia. One of the clearest signals of intent was made during a meeting of his General People’s Congress (GPC) held on May 9. Saleh stated: “We are ready to go to Riyadh, Khamis Mushait [in south-west Saudi Arabia, near the border with Yemen], Muscat or elsewhere to start dialogue and to reach an understanding.”

Saleh’s expressed openness to dialogue is probably aimed as much, if not more so, at his own supporters in Yemen than Saudi Arabia. It is a little over two years since the Saudi-led coalition intervened in the conflict. There is a hostility towards the coalition and Saudi Arabia, in particular among Houthi and Saleh supporters. He may be laying the groundwork among his supporters for any rapprochement with Saudi Arabia should such an event occur. Reports in May claimed Saleh’s representatives and Saudi officials had already participated in unofficial meetings in Berlin.

Saleh will have little trouble keeping his supporters onside. Regardless of anyone’s opinions about him, the former president has demonstrated longevity and is still a political force to be reckoned with in Yemen. He has proven his determination to remain in Yemen and to ignore pressure exerted on him to leave, enduring the coalition’s bombing campaign alongside his supporters in Sanaa. This demonstration of longevity feeds into the argument that Saleh may himself feel the timing is right to outmaneuver the Houthis diplomatically after they previously sidelined him.

In March 2016, the Houthis entered into direct talks with Saudi Arabia, which resulted in a ceasefire along the Saudi-Yemen border. The Houthis did so without consulting Saleh and his allies. Presumably, Saleh hasn’t forgotten about his apparent ostracizing whereby the Houthis appeared willing to trade him in for a relationship with the Saudis. Moreover, the extent to which the Houthis have entrenched themselves in Sanaa after storming the capital in September 2014 remains another major concern for Saleh and his loyalists.

In response to the Houthi talks with Saudi Arabia, the former president sought to formalize his faction’s role in new systems of governance intended for areas under joint Houthi-Saleh control. On July 28, 2016, the Houthis and the GPC agreed to form a 10-member Supreme Political Council (SPC)—a joint, executive decision-making body to administer the Houthi/Saleh-controlled areas. Then on November 28, 2016, the Houthi-Saleh bloc unveiled the formation of the National Salvation Government—a coalition government comprised of 17 GPC members and 16 Houthi officials.

Despite the creation of these institutions, Saleh and the Houthis have struggled to share power in Sanaa. This struggle can be seen in the Houthis’ reluctance to disband the Supreme Revolutionary Council (SRC). The SRC and its respective subcommittees continue to operate despite Houthi promises to Saleh that it would be replaced by the SPC.

Saleh is likely frustrated by the failed attempts to loosen the Houthi grip on Sanaa. He is also aware of the level of dissatisfaction among GPC members with the Houthis and their style of governance.

Saleh is trying to present himself as a rational actor willing to enter into serious discussions to bring an end to the conflict. His self-portrayal as the ultimate peacemaker is intended to ensure he is part of any future political settlement. It could also be a pre-emptive move designed to prevent any Houthi attempts to sideline him.

Anthony Biswell is a senior analyst at The Delma Institute, a risk advisory firm located in Abu Dhabi.