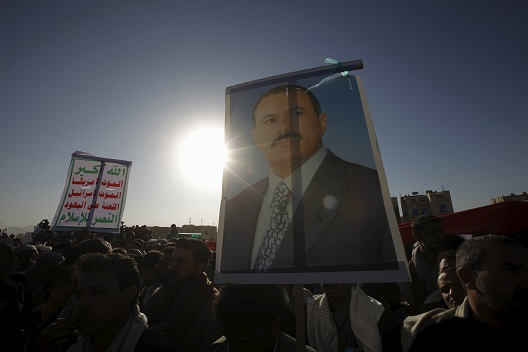 Tens of thousands of Yemenis took to the streets over the past few weeks to commemorate the 2011 uprising against the regime of Ali Abdullah Saleh. Although the largest demonstrations were in Taiz, a Houthi-led march in Sana’a raised the most intriguing political questions. The dearth of demonstrators commemorating the 2011 uprising not only revealed the lack of support for the Houthi movement, but also the demonstration itself may have been intended to send a message to their current ally of choice Ali Abdullah Saleh. If so, the Houthi-Saleh coalition against President Abdrabbo Mansour Hadi and his Saudi allies—always a marriage of convenience—may be tearing at the seams.

Why did so few Sana’a residents join the event? The obvious reason is that the city has suffered from an escalation in Saudi air strikes since December 2015, but that alone might have led many to commemorate the uprising as an expression of resolve against Saudi and other foreign intervention in Yemen. More likely, residents simply did not want to join an event organized by the Houthis. Opposition to the Houthi occupation of the capital since September 2014 has been consistently strong, with some segments supporting the Saudi-led campaign, even as it destroys large swaths of the city. Houthi-allied sources reported that nearly 9,000 Yemenis joined their demonstration, but those claims serve more propagandistic aims than describe reality. The absence of large crowds betrays the Houthi failure to gain broad popular support, even among many who share their hatred of Saudi and other foreign interventions in Yemen.

More interesting is the question of why the Houthis sought to hold the march in the first place. The 2011 crowds eventually forced Saleh’s resignation and only subsequent intervention by the Gulf Cooperation Council (GCC) later that year won him immunity from prosecution. But the Yemeni people have not forgotten the three-plus decades of Saleh-led repression and corruption. One cannot help but wonder if the Houthis organized the commemoration as a dig at Saleh to remind him that his role in the northern coalition is one in which he needs the Houthis at least as much as they need him. In this sense, commemorations of the 2011 uprising would revisit the widespread opposition to Saleh’s regime—and thus express ongoing opposition to his return to power. If that was the Houthi intent behind their commemorative march, they were sorely disappointed.

The animosity between Saleh and the Houthis predated their armed confrontations that began in 2004. Although Saleh is himself Zaydi, his regime sought to keep the aspirations of northern Zaydi leaders in check as Wahhabi Sunni practices gradually spread even in Zaydi-dominated areas by locals who had studied in Saudi Arabia. In the early 1990s, the Houthis adopted constitutionalism as a strategy to push back against what they experienced as encroachment from Salifism. The nonviolent movement appealed particularly to northern youths and reasserted Zaydi identity and religious practices against what was seen as a foreign import. Saleh allowed—but did not lead—the spread of Wahhabism in the north.

The prominent Zaydi sheikh Hussein al-Houthi—who had previously served in parliament as a member of the Zaydi political party, Hizb al-Haqq—assembled militias to push back against Saleh’s power in the north beginning in 2004. After Hussein’s death that year, his brother Abdul-Malik took the reins of what became the Houthi movement to reassert Zaydi identity and authority, particularly in the north. The conflict would likely have continued to this day had the uprisings not shifted the political landscape and forced Saleh from power. The Houthis joined the broader anti-regime movement and provided significant support for the uprising. For nearly a year, an Islamist republicanism emerged among the Houthis, the Sunni Islah party, and Islamist voices opposed to Saleh’s corrupt regime. Saleh and the Houthis remained antagonists through much of the 2012-2014 transition period of the National Dialogue Committee, but gradually came to share an opposition to interim-president Abdrabbo Mansour Hadi, who (with Gulf backing) monopolized the transition processes and shut out both the Houthis and Saleh. Politics makes strange bedfellows indeed.

The precise beginning of the Houthi-Saleh alliance is a matter of dispute, but when the Houthis invaded Sana’a in September 2014, portions of the military loyal to Saleh clearly did not interfere—and possibly even assisted with—the Houthi occupation of the city. Most observers at the time read this as an informal declaration of an alliance against Saudi-backed Hadi. The new friends also shared animosity for southern separatists and Al-Qaeda in the Arab Peninsula (AQAP).

Saleh brings to the party the better-maintained portion of the national army, with its formal military training and ability to operate more technical heavy weapons. He also brings support from extensive networks among Yemeni tribes and remnants of the General People’s Congress (GPC, the dominant party he continued to lead even after resigning in 2012). Saleh blames the Gulf states for engineering the transition that forced him out of power; save that intervention, he seems to believe that he could have weaseled his way back into power.

The Houthis bring their experienced militias, strong alliances with other tribes in the north, and the committed followers of their message of Zaydi empowerment. Together with Saleh, they tap into nationalist sentiment that views southerners with suspicion and Saudi Arabia as a long-time manipulator in Yemeni politics. Both also resent the US role in Yemen, but neither view AQAP as potential allies.

Between the Houthis and Saleh, there is more than enough hubris to go around. Each seems convinced it can dispense the other with ease once the Saudi-led campaign ends. But with no signs of that happening soon, will the coalition endure?

The Houthis may be exploring options for a Saleh-less future. Their representatives are involved in ongoing mid-level talks with the Saudis, who are adamant that Saleh cannot be part of Yemen’s future. It is possible to imagine the Houthis providing some guarantees that their limited relations with Iran—which the Saudi regime knows full well are not extensive, notwithstanding public rhetoric—in exchange for some role in determining the makeup of a post-war Yemen. The Houthis and Saudis share an interest in seeing Saleh retired, whether the latter chooses Tunisia’s Ben Ali route (exile) or Libya’s Qaddafi route (execution). At least two high-level GPC leaders have defected from Saleh’s camp and currently reside in Riyadh, working with Saudi encouragement to peel away support for Saleh from GPC ranks in order to preserve a role for the party in a future Yemen.

While Saudi Arabia would love to see the implementation of UNSC 2216—which calls for the unconditional surrender of the Houthis—in practice, the seeds for a Houthi-Saudi truce exist, with Saleh as the scapegoat. Although the Houthis want to see Saudi Arabia humbled (if not humiliated)—and thus persist in launching cross-border attacks into Saudi Arabia—a longer-term logic for both is to see Saleh permanently retired from Yemeni politics. With the Houthi-Saleh coalition not on the verge of defeat, there is room for the Saudis and Houthis to find some common ground in their ongoing talks and get the corrupt Saleh out of Yemeni politics.