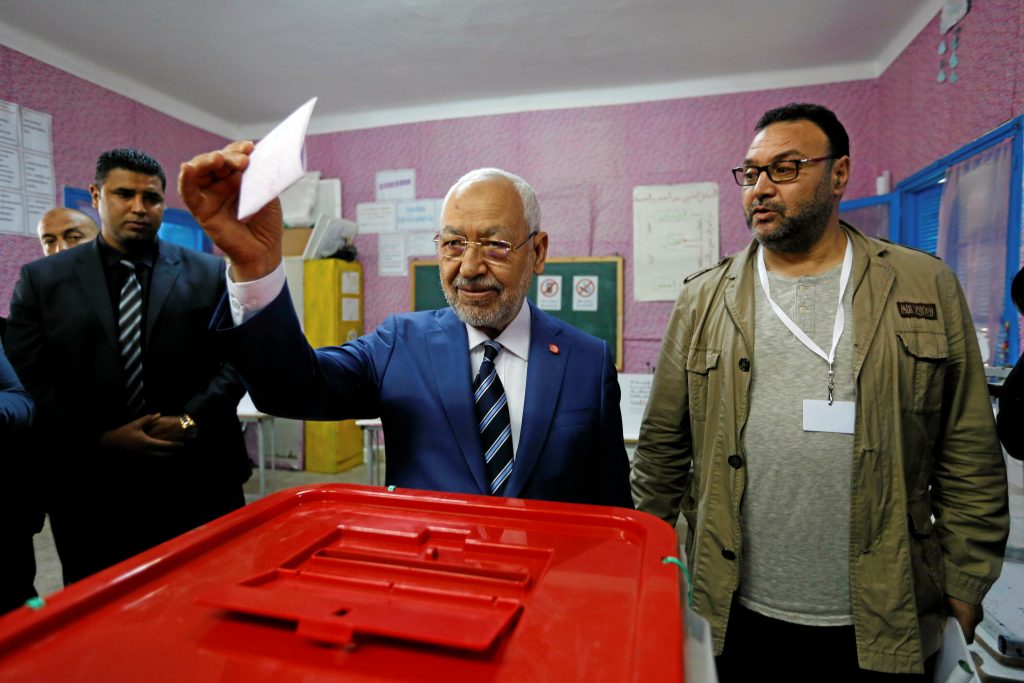 Rached Ghannouchi, head of the Ennahda party, casts his vote at a polling station for the municipal election in Tunis, Tunisia, May 6, 2018. REUTERS/Zoubeir Souissi

The reoccurring theme in analyzing the results of Tunisia’s municipal elections is the endless glass half-full or half-empty debate. The country’s first municipal-level elections since the 2011 Arab Spring were carried out in a free, fair, and safe manner, but produced mixed results: some promising and some disappointing.

In the recent local elections, turnout halved to 35 percent compared to the 2014 parliamentary elections, which saw the participation of 67.7 percent of the registered voters. Around one third of registered voters participated in the local elections and estimates of youth participation are even lower, an indicator many are pointing to as worrisome. The lower turnout is considered unsatisfactory, but there is no direct evidence to determine that low turnout signifies a rejection of the system by the people. Rather, widespread apathy and indifference could be at the root of such a low turnout. Although frustration with the system is most definitely present, the turnout of the municipal elections should not be too quickly interpreted as a damning factor of the political atmosphere.

Low participation could stem from the long delay in holding municipal elections and the population’s lack of trust in political parties. The central government—hesitant to share its authority—adopted many delaying tactics to forestall the process of decentralization, including not reaching the quorum in parliament and exercising filibustering. Activists, revolutionaries, and other Tunisians grew nervous that the municipal elections would never take place. Some feared the return of a government that consolidated power for the benefit of a few individuals, and grew apathetic to the slow moving political reforms.

A lack of trust in political parties is another likely cause of low participation. Parties, large and small, have little to no connection with everyday Tunisians, and, as in most Middle Eastern countries, do not enjoy deep roots in society. This disconnect may have led to the abstention that plagued May’s municipal elections. Holding local elections in-and-of itself is a very important step to begin addressing the root causes of abstention. These elections create a network of legitimately elected individuals who can forge connections with territory and voters. This is what is needed to reverse the population’s low morale and begin resolving issues of apathy and indifference.

Despite low turnout, there are several other outcomes in the elections that could have a positive connotation. In terms of the ballots, several results surprised observers. Those who did show up at the polls to vote did not choose established politicians: candidates under 35 years of age claimed 37.5 percent of the total seats, while women grabbed thirty percent. Another surprise was that while still obtaining the best result in the elections, the largest party, the Islamist Ennahda, did not secure the landslide victory it expected. Instead, independent candidates won 32.9 percent of seats. The pivot to non-establishment politicians demonstrates a confidence that the system will give voters new results if they choose new faces. The demand for new leaders is also a sign of the people’s will to form a true democracy that is beginning to function.

The recent elections are the first local elections since the highly controlled municipal elections under the Ben Ali regime. Prior to 2011, eighty percent of the seats as well as the head of the municipality were reserved for the ruling party. Since the Tunisian revolution, Municipal councils have been functioning similarly to before the fall of the regime. Therefore, the 2018 local elections marked the first multi-party elections and the first opportunity for new parties to be represented at the local level. These new representatives offer political parties many tools to improve communication between citizens and the government. It is, of course, now on the shoulders of political parties to use municipalities as a tool for earnest outreach to Tunisians and reverse the effects of those lost to apathy.

Parties can become more attune to local needs and issues in all regions through municipal-level elected representatives. In the short term, as parties become more engaged, this could encourage citizens to participate in future elections because they feel that the political apparatus is listening to their demands. More engagement at the local level has several other benefits. Opportunities for youth to engage can reduce the leverage of extremist groups to recruit. Increased interaction and engagement could also lead to a demand by the people for more transparency and accountability from the government.

The presence of municipal councils in every town could also increase opportunities for young men and women to gain political experience. Municipalities can provide training to deal with citizens’ issues starting at the local level; giving them the ability to eventually use this experience at the regional or national level. Increased competition among youth will elevate the quality of the political class and a new and better suited wave of politicians will emerge at every level.

Now that this important first step of local elections is completed, it is important to keep the momentum going. Tunisia’s central government must continue to pursue decentralization and improve the system. Tunis should allow allocation of funds, powers, duties—as the municipal code instructs—as soon as possible, to create positive dynamics presented above, including making participation a priority.

The recent round of elections in Tunisia is further proof of what has been demonstrated across the region and world: that holding elections is not an elixir, but rather a first step upon which to build a strongly rooted democracy. How Tunisians apply the results of the elections with the political tools available will either protect and advance their status as the only Arab Spring success story or could lead to a retreat to old ways.

Erin Neale is a research assistant at the Rafik Hariri Center at the Atlantic Council. Follow her on Twitter @erinaneale.