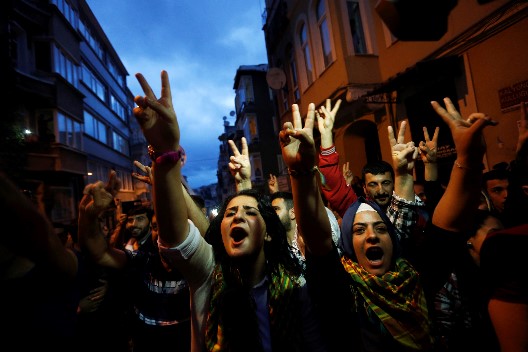 Over 50 million Turkish voters went to the polls on Sunday June 7 to cast their ballots for their preferred political parties. During the final days of the campaign, the ruling Justice and Development Party (AKP) sharpened their political attacks on Turkey’s fourth largest political party, the Peoples’ Democratic Party (HDP). The AKP’s strategy focused on keeping support for the HDP below the 10 percent threshold, which would have allowed the AKP to retain its parliamentary majority and perhaps exceed 330 seats. The AKP would then have had full rein to pass to a national referendum a self-drafted constitution that strengthened presidential powers. The results of Sunday’s elections have thrown a wrench into the AKP’s plans.

The presidential system had the support of Turkey’s most important politician: President Recep Tayyip Erdogan. Opposition parties accuse Erdogan of violating Turkey’s constitution by campaigning in support of the AKP, the party he formerly had led, and for its current leader, Prime Minister Ahmet Davutoglu. Erdogan, not Davutoglu, reportedly handpicked the great majority of AKP candidates. The opposition seized on this opportunity to attack Erdogan for his frequent campaign-style speeches, which in turn opened the President to a series of withering attacks on issues ranging from corruption to the building of his presidential palace. Erdogan’s presence on the campaign trail appears to have weakened support for the AKP and ultimately contributed to the party’s poor electoral showing.

The final election results were a surprise to many observers, despite being in line with the latest poll data released in the days before the vote: there had been serious question whether voting irregularities would critically shift the outcome. With 99.6 percent of the vote counted, the AKP fell far short of its goal of winning more than 330 seats: the party received 40.8 percent of the vote, or 258 parliamentary seats. Without the necessary 276 seats, the AKP can no longer form a government on its own. The HDP surged past the 10 percent threshold, receiving 13.1 percent of the vote, corresponding to 80 seats. The traditional opposition, the Republican People’s Party (CHP) received just under 25 percent of the vote, or 132 seats. Finally, the far right Nationalist Movement Party (MHP) also exceeded expectations, winning 16.3 percent of the vote, or 80 seats.

Under Turkish law, Erdogan must give the mandate to a certain individual to form a new government. The person selected then has forty-five days to comply or the Constitutional Court will call for early elections. As of now, all three opposition parties have ruled out a coalition with the AKP, citing the presidential system as the key obstacle. The ball is firmly in Erdogan’s court, raising the possibility of at least two different scenarios.

First, Erdogan could task Davutoglu with forming a government. (Davutoglu had vowed during the campaign to resign if the AKP received less than a majority vote; some speculate that Erdogan may pin the onus for the disappointing results on him and turn to another nominally to lead the party and/or to form a new coalition government.) The AKP’s most likely coalition partner is the far right MHP. The AKP’s far right constituency overlaps with that of the MHP, which in previous elections has worked in the AKP’s favor. These hitherto “soft AKP supporting nationalists” appear to have defected to the MHP over concerns about the economy and the Kurdish issue. The MHP’s vice president has ruled out compromise with the AKP, citing the corruption allegations and the AKP’s peace negotiations with the HDP. MHP Chairman Devlet Bahceli indicated in his post-election speech that the Erdogan-favored presidential system is a deal breaker and the AKP should work with the HDP. Despite these statements, the MHP remains the AKP’s most natural coalition partner and rumors have already surfaced suggesting the MHP is eager for a leadership role in the parliament or asking for controls over certain ministries. Yet, it appears that the presidential system and the Kurdish peace process will seriously complicate any efforts to broker a coalition with the AKP.

Second, the AKP’s Deputy Prime Minister Bulent Arinc has floated the idea that it could remain outside of a coalition and leave the formation the government to the CHP, HDP, and MHP. This would require Erdogan to mandate an opposition party to form a government. However, any negotiations would hinge on the MHP’s extreme discomfort with Kurdish nationalism. The HDP, which has its roots in the Kurdish nationalist movement, has put forward a political platform centered on deepening Turkish democracy, granting more minority rights, and decentralizing the state. The party also has links to the Kurdistan Workers’ Party (PKK), the insurgent group that has waged a decades old insurgent campaign against the Turkish state. The HDP has not ruled out a compromise with the MHP, but the former remains vehemently opposed to the latter.

In the event that the HDP and MHP can overcome their differences, Erdogan would come under pressure to acquiesce to this development, lest his refusal to sanction the forming of government be interpreted as anti-democratic. As such, Erdogan will certainly make his conditions known. The first potential condition could be the announcement of early elections, perhaps after a year or two of minority governance. This coalition would thus be empowered for a specific period to achieve a number of tasks, most probably related to passing economic reforms or the drafting of a new constitution. However, a CHP-MHP-HDP coalition would also have the required number of Parliamentary seats to reopen the corruption case against four AKP ministers. Erdogan has expended a considerable amount of political capital to ensure that the case was closed, both to prevent further damage to the AKP and to protect his son, Bilal, who was caught up in the corruption allegations. Erdogan is unlikely to leave anything to chance and will want ironclad guarantees on the corruption issue before agreeing to a minority government.

More broadly, the presidential system and Erdogan’s status are certain to play the decisive factor during the negotiations to form a government. The three opposition parties have made it abundantly clear that they will not support the presidential system. Nonetheless, Erdogan will not likely give up on his long-held ambition to create an executive presidency.

Erdogan has three options: First, he could compromise, support AKP-MHP negotiations, and back away from his presidential ambitions. Second, he could hold firm and opt to play the long game: he could tap the CHP to form a government and push for ironclad guarantees and early elections after a set period, or simply wait for these negotiations to fall apart. Both options lead to early elections, albeit under different circumstances. Erdogan could bet on the country souring on the idea of fractious coalition politics, which would undercut support for this election’s two biggest winners, the HDP and the MHP. These “soft HDP/MHP supporters” could then move back to the AKP, especially if the party changes its rhetoric to appeal to former AKP voters.

Third, Erdogan could simply choose to sit this one out, knowing that the pathway to a coalition is so fraught that the negotiations are almost certain to collapse. This outcome would also trigger early elections and, perhaps, undercut the HDP’s appeal to pious Kurds, particularly if they cooperate closely with the secular CHP or nationalist MHP. In all three scenarios, the MHP holds considerable power as the swing vote in the AKP-MHP coalition or the CHP-HDP-MHP scenarios. Erdogan also retains a considerable amount of power and has many options should he continue to prioritize the transition to a presidential system.

Much depends on the AKP’s future ambitions, and whether the electoral setback will induce any serious soul-searching or realignment within the party. The presidential system caused considerable debate within the party itself and many AKP representatives expressed concern that the near singular focus on the issue during the campaign would undercut the party’s appeal. Erdogan’s dominance forced the party to elevate the presidential system as the party’s primary goal in its election manifesto. Will Erdogan permit his party to reevaluate its platform? Does the AKP have a leader willing to challenge Erdogan? The answers to these two questions are unclear. However, there does appear to be some recognition that Erdogan’s insistence on restructuring the Republic to a presidential system has become a burden to the party’s future development: The elections did confirm Erodgan’s solid base of support at about 41 percent, but they also showed that three-fifths of the electorate now reject the AKP. Unless Erdogan and his party revert to their successful centrist formulas that won solid majorities in the past, the AKP appears no longer able to act as the umbrella under which Turkey’s majority center-right electorate can gather.

Nonetheless, the AKP has yet to find the heir apparent and a leader with the right mixture of charisma and political acumen to step into Erdogan’s shoes. Davutoglu struggled on the campaign trail, not the least of which because Erdogan challenged him when he attempted to tackle the corruption issue, which has become the AKP’s biggest Achilles heel outside of the presidential system debate. Davutoglu’s future remains unclear. He had promised to resign if the AKP did not win more than 276 votes. The AKP is scheduled to hold a party congress in September, raising the possibility that he could be replaced. Will Erdogan tap a new candidate to replace him? What would that candidate look like? Would he be picked to appeal to a certain segment of the election (the pious Kurds, or the leftist liberals)? Conversely, will Davutoglu muster the political forces needed to sideline Erdogan? No one knows.

As Turkey begins the process of forming a new government, many questions remain unanswered. Erdogan’s considerable influence within the party will directly shape the outcome of these elections. However, many of the AKP’s recent political failures lead back to Erdogan, raising the possibility that the party could try to push him aside and confine him to the palace. However, Erdogan retains considerable influence with many AKP MPs and has links with key elements of the business community. This raises even more questions about how he would seek to govern, either as an influential (but separate) part of a coalition government or during a period of political uncertainty stemming from stalled negotiations.

The smart money is on early elections. How Turkey gets there remains shrouded in mystery. The MHP can act as a potential kingmaker. Or its biases could lead to early elections, even if the AKP engages in dialogue aimed at creating a coalition, or the HDP and CHP approach the party to form a minority government. The AKP could also change. Erdogan could also opt to play the role as conciliator-in-chief and support an AKP-backed effort to create a coalition government. He could also seek to remain above the fray, as part of an attempt to rebrand himself. Much remains to be decided and the makeup Turkey’s future political system remains in flux.