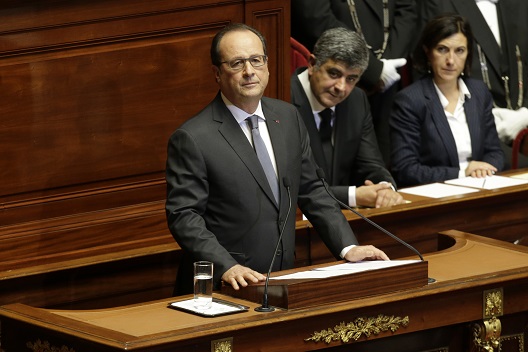 French President Francois Hollande reacts as he delivers a speech at a special congress of the joint upper and lower houses of parliament (National Assembly and Senate) at the Palace of Versailles, near Paris, France, November 16, 2015, following the series of deadly attacks on Friday.

The words of French President Francois Hollande, commenting on the Paris attacks still unfolding at the time of his statement, resonated with many here in the United States where similar words were used after 9/11. Those in Washington will recall telling the White House that what happens in Syria (and the Middle East) does not stay in Syria and that the United States needed to take the lead in quickly resolving the Syrian crisis before it metastasized into a complex violent conflict that could easily infect the rest of the region and beyond. The White House now seems finally convinced, but as the old Arab proverb says, Ba’da kharab al-Basrah (too little, too late).

Late or not, the Islamic State (ISIS or ISIL) threat can only be mitigated through a comprehensive and serious effort to destroy the organization and address the root causes of its appeal—i.e. fixing Syria. For all the air strikes, funding, and arming of the Syrian opposition, no one has yet engaged ISIS in a holistic manner; for all the discussions with Russians and others on the future of Syria, no one can agree on specific and realistic steps towards the transition from Assad to a new Syrian state, one that respects its citizens and does not export terrorism.

President Barack Obama could be excused for underestimating the importance of ISIS when it surfaced in Syria in 2012. After all, a motely group of former al-Qa’eda terrorists appearing in Syria and promising a new wave of terror was not in itself something new or necessarily credible. Operatives had crisscrossed the porous borders between Syria and Iraq before, with facilitators at both ends (including those working for Syrian intelligence), intent on helping them execute their attacks, mostly in Iraq. The Assad regime’s retort, when presented with this charge against his regime by US officials in private meetings, was “Not to worry, we only do this to infiltrate, keep an eye on the group [ISIS], and contain them.” Assad released hundreds of al-Qaeda prisoners precisely around the time he started making the case that Syria was fighting terrorists and not peaceful protesters.

The link between dictatorship and extremism is both direct and indirect. Authoritarian regimes use security to justify their hold on power and deny citizens’ their civil liberties. In an effort to buttress their arguments, they sponsor their own bad actors, unleash them on their political opponents as needed and cast the blame elsewhere. At best, even when not actively sponsoring terrorists as Assad has done, stifling free expression and secular political organization leaves the political space by default open to underground extremism—in the current Middle East, this usually entails religious extremism. Directly and indirectly, the Assad regime and ISIS are intertwined.

The US-led coalition against ISIS formed in 2014 included ten European and Arab countries, none of which were willing to put troops on the ground. The air campaign has failed to reverse ISIS’s gains and the ground war in Iraq—fought by the Iraqi army, Shia militias, and Kurds—has been slow, uncoordinated and, save for a few victories, unable to uproot ISIS from the regions it has occupied. The coalitions of Syrian opposition fighters in Syria (that include jihadists in their ranks) have added another layer of complexity, fighting one another as often as they fight the regime. Turkey, which had offered up its own troops even before the birth of the international coalition, demanded NATO support and a comprehensive strategy to remove both ISIS and the Assad regime—conditions which the United States and NATO found unpalatable. Turkey committing its full military power across the border into Syria would undoubtedly introduce complications, particularly as it would overrun Kurdish areas in the process and jeopardize the consent and collaboration of Kurdish Peshmerga forces. Yet the lack of political will in Washington and Europe to commit fully to military intervention rendered the point moot. Without Turkish troops on the ground, NATO countries now have to decide how much they are willing to contribute to President Obama’s plan to “seriously degrade and ultimately eradicate” ISIS.

The ISIS statement claiming responsibility for the Paris attacks threatened the French and “the other crusaders with them” that more attacks would follow. “This is but the first salvo,” warned the statement. As unpalatable and dangerous as it admittedly will be, only sufficient forces on the ground in both Syria and Iraq to advance on ISIS from both directions and uproot its self-styled caliphate will stem the organization’s ability to follow through on its continued threats. Although Obama declared at the G20 summit in Antalya, Turkey that his administration rejects the use of US ground forces in Syria, he has already committed dozens of US special forces teams to fight ISIS. If the military effort eventually succeeds, US Secretary of State John Kerry and his counterparts in Vienna will need to spend even more time scripting political and economic reconstruction.

It will no doubt be more difficult to fix Syria now than it would have been four years ago. Nonetheless, the situation in Syria has clearly had a negative impact on global security. If the first step has to be a military one, the follow-on phase to a military intervention must involve rebuilding Syria to treat the cause rather than just the symptom. A full list of lessons learned from Iraq 2003 must certainly be drawn to avoid the mistakes of the Iraq invasion and its aftermath, but the lesson is surely not to neglect Syria’s political, security, and humanitarian disasters. Syria can be whole again. It is in the interest of the international community to see that happen. Foreign powers cannot legitimately or practically force regime change wherever they choose, but the international community has an obligation to intervene in a case where the people have risen peacefully and are being systematically butchered by their dictators. The United States, Europe, and Turkey also have a strategic responsibility to stop the Syrian conflict before the violence there has even more serious effects on their shores than what we have seen so far.