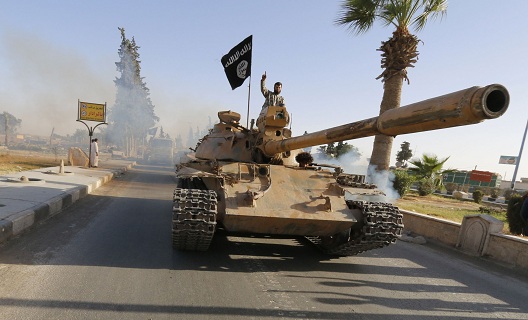 In the many Egyptian talk shows, known for their anti-Muslim Brotherhood rhetoric, shocking videos of Islamic State in Iraq and al-Sham (ISIS) fighters are displayed on a near daily basis. The videos show a woman stoned to death after she was convicted of adultery, mass executions, beheadings, or even show people being thrown off a mountain cliff after they have been shot.

The talk show hosts argue that had President Abdel-Fatah al-Sisi, as defense minister a year ago, not intervened to end the one-year rule of former President, and Muslim Brotherhood leader, Mohamed Morsi, Egypt would have faced the same chaos and bloodshed seen in Iraq and Syria. “See for yourselves what Sisi saved us from. We would have ended up with groups like ISIS doing the same in Egypt,” Ahmed Moussa, a television presenter on the private satellite channel, Sada al-Balad, recently said during his daily show.

While this debate rages, observers and security experts warn that the extremist group may have already established a foothold in Egypt, even if through small groups of individuals, not officially affiliated with ISIS, but who look to them as a model worth following. Adding to this fear is the fact that an unidentified number of Egyptians are reportedly among ISIS’ fighters, and have recently been boasting as much on their personal social media accounts.

After the group made surprising advances in Iraq and Syria early this summer, taking control of cities, oil fields, water dams, and threatening to reach Baghdad, they changed their name from the Islamic State in Iraq and al-Sham to simply the “Islamic State,” claiming they had already started the process of reviving the Islamic Caliphate in which one leader controls all Muslim countries. But the group continues to be known among Egyptians as Da’esh, abbreviating the first letters of its long name in Arabic, Dawlet Al-Khilafa fe Al-Iraq Wal Sham. This week, on 18 August, in a statement that cannot be verified, a letter was added to the Arabic acronym: an ‘m’ denoting Misr, or Egypt. A group calling itself Da’eshm, (the Islamic State in Iraq, al-Sham, and Egypt) claimed responsibility for two recent attacks in which five policemen, including an officer, were killed and three others injured. The same group also alleged they were responsible for a terrorist attack against an army border post in the Western Desert in Farafra a month ago, in which 23 soldiers and officers were killed.

Khaled Okasha, a security expert and former police officer, said that the claim of responsibility for Farafra deaths sheds doubts on the authenticity of the statement. He points to the fact that another militant terrorist organization, Ansar Bayt al-Maqdas, has also claimed responsibility for the same attack Security officials stated at the time that a flag belonging to the terrorist group, al-Qaeda, was seized at the scene of the Farafra attack. “The Islamic State, which claims allegiance to a man they appointed as Caliph, Abu Bakr Al-Baghdadi, broke ranks with al-Qaeda, led by the Egyptian Ayman Al-Zawhiri, and have been involved in bitter fighting in Syria,” Okasha said. Al-Qaeda in Syria itself has its own group, named Jabhat al-Nusra.

‘Da’shem’ also warned Egyptians that they had a chance to “repent” and support the Islamic State, giving them a 12 day deadline before they would resort to similar practices to those followed by their brothers in Syria: “Bloodshed, chopping off heads and slitting bellies,” the statement read. In the attack in which one officer and three soldiers were killed in the Northern Coast town of Daba’a, the statement said they intentionally burned the bodies of the four victims, “Like they did with the Muslims in the Raba’a and Nahda sit-ins,” in reference to the violent dispersal of pro-Morsi sit-ins last August, in which hundreds were killed.

Equally shocking to many Egyptians is the growing number of young men boasting on their personal Facebook and Twitter accounts about belonging to ISIS, and taking part in their gruesome acts of killing in Iraq and Syria. The most prominent case was that of a young man, in his early 20s named Islam Yaken. Yaken garnered a significant amount of attention because of his background. The upper-middle class young man was mainly interested in body building, rap, and attended a French high school before recently graduating from the Faculty of Law at Cairo University.

Before travelling to Syria, Yaken posted videos on YouTube filled with body-building advice, but in recent weeks, he posted instead photos of himself, thickly bearded, sitting on a horse, holding a sword aloft. In front of him sits a pot with two severed heads, allegedly belonging to a rival Islamist faction that refused to swear allegiance to the Islamic State.

Yaken’s Twitter account was suspended after he shared gruesome images of an American journalist, James Foley,allegedly beheaded by ISIS in Syria. Prior to that, the so-called ‘hipster Jihadist’ was known for interacting with people on Twitter in English. One allegation he clearly wanted to deny was that he belonged to the Muslim Brotherhood. “I can accept any charge, except that I belong to the Brotherhood,” he tweeted. Several recent statements issued by ISIS have been highly critical of the Brotherhood, claiming the organization violated Islamic law by participating in popular elections and supporting Western-style democracy. For them, establishing the Islamic Caliphate is an obligation derived from the Qur’an, and it will not be achieved through elections and democracy, but rather through battle.

The search for Egyptians fighting alongside ISIS in Syria increased after the publicity surrounding Yaken, and it quickly became widely reported issue in the Egyptian press and on television. Ahmed El-Dreini, a columnist and expert on Islamic groups, said Yaken’s case was particularly shocking because of his middle-class background. “Many people started thinking that one of their young relatives could end up fighting with ISIS, and performing beheadings,” he said. He added that Yaken defied the common stereotype that many militants who resort to armed violence come from poor backgrounds, and have little or no education.

The majority of Egyptians known to be fighting in Syria and Iraq under the banner of the Islamic State, Jabhat al-Nusra, and other groups were able to easily travel to the region during Morsi’s year in office. The Brotherhood officially supported armed Islamic groups fighting in Syria, and the former president attended a rally a few weeks before his ouster at Cairo stadium in which tens of thousands of Islamists chanted slogans calling for Jihad in Syria. One of Morsi’s senior advisers, Khaled al-Qazzaz, raised eyebrows when he said Egyptians waging “jihad” against Syria’s President Bashar al-Assad would not be prosecuted upon their return because they did not violate any laws.

The result, however, was that dozens of young Egyptians remained in Syria, gaining advanced experience not in simple terrorist tactics such as hit-and-run attacks and roadside bombs, but in the use of advanced war weapons, such as tanks and missiles. Whether they support ISIS, al-Qaeda, the Brotherhood, the Islamic Group or Jihad, they are obviously all opposed to the removal of Morsi, and have promised that Egypt would be their next battleground upon return, fighting against what they see as a “military coup,” by the current President, Sisi against the Islamist leader.

Image: Photo: Militant Islamist fighters on a tank take part in a military parade along the streets of northern Raqqa province June 30, 2014. (Reuters)