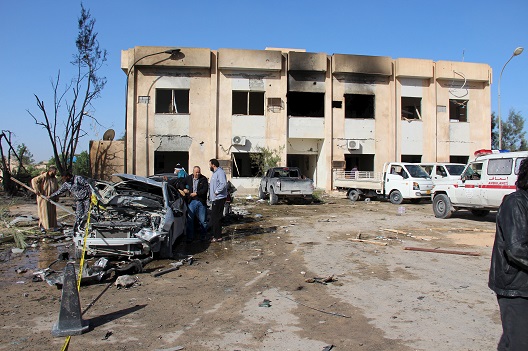 Libya’s Islamic State (ISIS or ISIL) branch has expanded its grip on Libyan territory through multiple parallel tactics and the sluggish pace of negotiations between the feuding governments in Tripoli and Beida has contributed to this expansion. The confrontation between the two factions has led to a paralysis in the capacity of legitimate forces to combat the expansion of terrorist organizations in many parts of the country. The UN-mediated agreement signed by some representatives of the two parliaments, political parties, civil society, local government, and other stakeholders in the Moroccan city of Skhirat in December establishing a Government of National Accord (GNA) has not been universally accepted in Libya. Doubts remain over whether this government can ever establish itself in the Libyan capital of Tripoli. ISIS is taking advantage of this state of anarchy and confusion to carry out a sophisticated strategy to establish itself in the territory.

After local rivalries and tribal dynamics obstructed the ISIS attempts to control the eastern city of Derna, the group moved to the central coastal city of Sirte. Showing a capacity to learn from their previous experience in Derna, the leadership of the Islamist group has instead chosen to take advantage of the local dynamic rather than trying to dominate it. As the hometown of former Libyan dictator Muammar Qaddafi, Sirte plays host to most of the loyalist tribes. When not directly antagonizing them, the new post-revolutionary elite have largely marginalized these tribes and blocked access to the political process. ISIS has exploited their malcontent and resentment against the new political system to build consensus for its penetration and expansion into the strategically located city in central Libya. After establishing itself through a mix of imposing order and security in town and brutality against its opponents, the terrorist organization has proceeded to ensure the survival, and indeed the expansion, of its territory.

ISIS has based its strategy on three tactical pillars. The first involves instilling fear in its opponents in Tripoli and in Tobruk. It has succeeded through a series of car bombs and suicide bombings against selected targets in the territories controlled by the two governments. This tactic remains an ongoing part of the general strategy and will likely continue with increasing levels of bloodshed.

The second pillar involves developing connections with the criminal organizations mushrooming in Libya, both in the southern desert region as well as in the coastal areas, as criminal and Islamist interests coincide. The recent bloody truck bomb attack against the coast guard barracks in Zliten demonstrates this convergence. Zliten is a major center for the smuggling of migrants and goods. ISIS would resist any attempt by the Tripoli government, with which the Zliten city council is allied, to combat criminal organizations. The murder of the city’s Counter-Criminal Agency director on December 29 and the attack against the coast guard recruits who were receiving training to combat smugglers both weakens government control and law enforcement over the area. This second pillar of ISIS’ strategy is the most dangerous one, combining the territorial control of emerging criminal gangs with the military capacity of a terrorist organization that does not shy from adopting the most brutal tactics to reach its objectives.

The third pillar of the ISIS strategy involves the classical expansion through rapid and devastating attacks against its enemies. The operations against the oil installations of Sidra, Brega, and Ras Lanuf, are part of this more direct strategy. The attacks are not meant to occupy the oil structures to control them and sell the oil abroad as the mother organization is doing in Syria and Iraq. Thanks to the Western and international blockade, no actor can sell Libyan oil outside of the official channels. Rather, ISIS means to destroy Libya’s infrastructure to prevent the country’s legitimate institutions from utilizing the resources and obtaining revenues vital for the reconstruction of the country. By degrading its enemy, the terrorist organization achieves elements of the first two pillars. If achieving this goal is accompanied by additional territorial acquisitions—such as in the conquest of the Ben Jawad village—all the better.

The Libyan political factions and the international community will face many difficulties before they can establish the necessary order and stability to adequately confront ISIS in Libya. To even begin to reverse the negative trend in which the country has plunged, the main Libyan factions must put aside their differences, rivalries, and jealousies and agree to work together. ISIS and other terrorist and criminal organizations have begun entrenching themselves in the country, requiring immediate and effective strategies to confront them. The GNA could, despite the flaws that have accompanied its inception, provide a point around which to rally Libyan forces and Western support. While essential, constructive international support needs an invitation and a plan from the legitimate Libyan authorities. Prime Minister-designate Fayez Serraj can use this opportunity to demonstrates the necessary attributes for this role: the courage to go to Tripoli and install his government, despite the threats, the leadership to coalesce the Libyan factions around his government, and the wisdom to request the international support needed to defeat the enemies of peace, legality, and democratization.

Image: A general view shows the damage at the scene of an explosion at the Police Training Center in the town of Zliten, Libya, January 7, 2016. (Reuters)