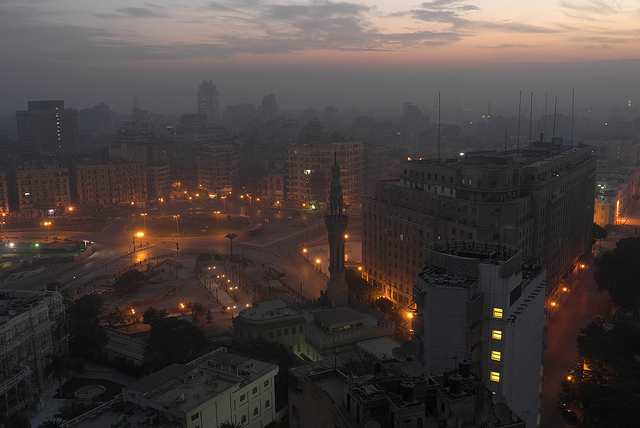 It is no coincidence that the people who believe TV ads marketing a so called: “magic patch” as a cure for every ailment or pain are the same people addicted to the ‘text-to-win’ contests that carry the promise of a trip to the holy land (‘Umra) in exchange for answering questions such as "What is the name of the Prophet of Islam? " Their hopes and dreams are driven by the belief that a pilgrimage will clear their conscience of the guilt of bribes they accepted to cover up corruption or the guilt of the rightful inheritance they shamefully denied their sisters.

Unfortunately, these people represent a growing number of Egypt’s population. Many Egyptians, through the years, have been denied equal opportunities or fair chances. Their fundamental rights and needs were never respected or met, and gradually they were stripped of their dignity and pushed to believe that dignity is a luxury they cannot afford, a luxury reserved only for the rich and the privileged. They were constantly fed lies about a future that never comes, tomorrows they cannot wake up to and progress that never happens. They were excluded from society, leaving them bitter and with no real hope – a fate no human should have to face. Pretending they do not exist simply adds insult to injury.

Unacceptable as it may be, it makes sense that such a complex, unhealthy environment has attributed to building walls of misunderstanding, not to mention ignorance, frustration and a lack of appreciation either for one’s self or for others. It is a highly toxic mix of feelings that does not allow for clear thinking nor for the development of any sort of empathy.

It is no surprise then, that when these same people did not understand why Egyptian doctors staged a strike, calling for improved government medical services – the very same services they themselves use. To make matters worse, they attacked those doctors, insulted them, and demanded that they end their strike. They were unable to exercise patience for one hour of reduced medical services, while they have had an intimate understanding of humiliation for each hour of their lives. They don’t mind losing their kidneys to contaminated water, or contracting lung cancer from polluted air. They attribute it all to God’s will, and who can oppose God’s will? This shows, at its best a deep misunderstanding, or at its worse, complete ignorance of religion

We have become a population of disparate societies, a nation without a clear vision that unites us, and we have no goals for people to enthusiastically work toward. Instead, the privileged intellectuals and the upper class are caught up in ideological wars and business deals. The less privileged that have lost a sense of mission are easy prey for those who trade in sentimental wares, catering to the dreams of the poor and downtrodden with promises of ‘losing weight in a hundred days.’

One merchant offers ‘bread and freedom,’ while the other hastens to offer ‘social justice.’ One wants to sell them a state based on institutions, while another is content to label his project ‘Islamic.’ People initially wanted “The ‘bread’ project” in order to meet the daily needs of their children. But with thoughts of the repellent classism they face at police checkpoints or in government offices, they have almost chosen to vote for ‘social justice’ thinking that a ‘state of institutions’ would stop any single group from monopolizing key state posts and most of the country’s wealth.  Then just as they were about to make that choice, out came the conservatives with their so called ‘Islamic’ project, plastering the slogan everywhere. They were not ashamed to stick posters everywhere, even on the walls of the Sanitation Authority Building, posters bearing a religious slogan worshipped by billions around the world.

People have chosen the ‘Islamic’ brand, motivated by ongoing remorse and under the belief that a non-Islamic theory of salvation has not worked for the country over the last 60 years. However they made that choice under the pressure of serving Islam and being good Muslims fulfilling God’s will. Or under the impression that Islam commands them to be stripped of any free will to think and reflect, which is completely false. Islam honours free will, free speech and choice. Islam is based on responsibility and free will above all. However, the more people raised their voices to ask for bread, freedom or social justice, the conservatives would only shout louder, “Islameya, Islameya.” (Islamic, Islamic).

If asked what caused poverty and disease, the conservatives would state that these are punishments because we consented to live on usury and did not observe God’s teachings and have not enforced Sharia. When asked what should be done about it, they respond with pro-Morsi and pro-Sharia demonstrations in support of his decrees. Days and weeks passed, while they waited for God’s rewards in return for their sacrifices. Until one day the president appeared on television announcing that he had assumed all legislative powers and responsibilities. Upon hearing such news, they cheered, exclaiming "God is great! Now the president will draft Sharia based laws and eradicate usury, and God’s anger will be lifted. "

On the contrary, the president used this mandate to issue man-made laws protecting his so called “family and tribe1,” and to negotiate clearly usurious loans, labeling the interest instead as ‘administrative expenses.’2 If asked why he refrained from applying his ‘Islamic’ project although he held all legislative authorities, his administration would say he is afraid of the ‘people’s reaction.’

Don’t place the blame on those who try to flex their muscles showing off their number of followers by having barbecues in front of Media Production City. Don’t blame those who claim to be sheikhs because they perform the obligatory dawn prayers daily at the mosque.

You, who are leading this country, are the ones who chose to work slowly, without a clearly proposed or declared plan, leading people to feel that you have chosen laziness over well-planned and hard work that addresses the current problems and challenges. You gave the impression you favor short-term benefits over sustainable long-term reforms. You thought that the ballot you place inside those ballot boxes would be your writ of indulgence, buying you forgiveness. You have taken nothing from Sharia except threats and intimidations. Then during any discussion of humanity, kindness, justice, retribution and the prohibition on usury, you have “placed your hands over your ears, and persisted, puffed up with pride.”

You need to wake up to the fact that you are no longer winning ground nor retaining the same sympathy you previously gained. We have to find a way, now not later, to launch a true renaissance; one of substance, entirely different from the one the Muslim Brotherhood promulgated but failed to truly offer.

A true national project must be based on a solid foundation and clear vision, and a clearly defined mission with set plans and goals. A renaissance that reclaims the country’s and the people’s dignity and free will from the shackles of Western usury as well as from deals with the East that threaten Egypt’s sovereignty.

1 When the president addresses the nation, he refers to them as his “family and tribe” but the opposition believe he is referring to “the Islamic Brotherhood.”

2 The Presidency referred to the “usurious interest” of the loan offered by International Monetary Fund as “administrative expenses” on different occasions, angering many of those opposed to the loans.

Mohamed Tolba founded the Salafyo Costa Movement in April 2011. He writes a weekly column for Egyptian daily, al-Youm al-Saba’a, and his first book is to be published in the coming months, detailing his experiences in Sudan, and the challenges he has faced as an Egyptian Salafi citizen.