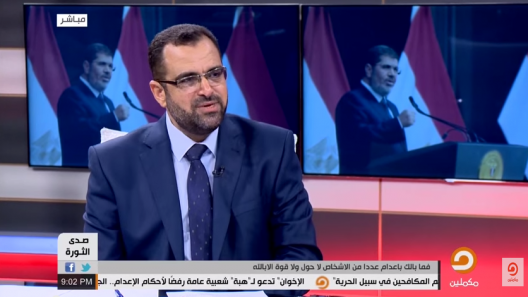 On the evening of July 3, 2013, then Minister of Defense Abdel Fattah al-Sisi delivered the speech that would permanently change the trajectory of Egypt. Egyptian satellite channel Misr25 broadcast the speech along with all channels in the country.

At the conclusion of the speech Misr25 went straight to images from Raba’a al-Adaweya Square, where thousands of supporters of former president Mohamed Morsi had camped out and were already chanting against military rule. After 30 seconds, the channel lost its signal and has not been back on since.

Misr25, affiliated to the Muslim Brotherhood, was established in 2011, a time that saw a surge in private media in Egypt with the birth of other channels including CBC, MBC Masr, Al-Jazeera Mubasher Misr, and Sada El-Balad, among others. A more politically engaged post-January 25 population, along with the rise of new platforms, brought on a new array of faces and opinions as the media cautiously tested its new boundaries.

By the time Morsi was elected, lines had been drawn and most channels were either decidedly critical or unquestionably supportive of his policies. At times the Brotherhood president lashed out at media critical of him, but he couldn’t have carried out the sort of large-scale crackdown on public media that Sisi managed, even if he had wanted to, due to lack of support from the general population and state institutions. However to his credit, he outlawed the preventive detention of journalists.

At the time Islamist channels, in defense of the president they supported, resorted to tactics that included conspiracy theories and sectarianism. When anti-Morsi protesters gathered at the presidential palace in December 2012, Misr25’s Sherif Mansour made the unsubstantiated claim that Christians were arming protesters, and blamed the Coptic Orthodox Church for mobilizing its followers, an accusation that was commonplace across these channels during elections and anti-Brotherhood demonstrations. The idea of ‘church militias’ was, and continues to be, a popularly touted conspiracy theory. A few months later, conservative cleric Mahmoud Shaaban, a regular panelist on the Salafist Al-Hafez channel, said that leaders of Morsi’s opposition should be put to death according to Islamic law.

However July of 2013 brought a shockwave to Egypt’s media scene. Misr25, Al-Hafez, and a handful of other Islamist channels that had supported Morsi to his end, were shut down. Photos surfaced of personalities from those channels taken into police custody. The interim government was aware of the power of the media in Egypt. That was immediately apparent moments after Morsi’s ouster. The era of state-sanctioned political Islamist media was over.

Only weeks after, another channel was established, but it did not run out of Media Production City. Raba’a channel, which bore the name of the square from where it was based, was part of the mass sit-in that continued in Cairo. It would broadcast speeches from the stage, scan over the thousands of protesters chanting in support of Morsi, and interview prominent Islamist figures on site.

However with the brutally bloody dispersal of Raba’a al-Adaweya Square that left hundreds dead, came the end of the sit-in and the end of the channel. At the peak of the crackdown, the establishment of a new channel inside Egypt was now impossible.

Many prominent Brotherhood dissidents fled Egypt and made their way to Qatar, where they were regulars on Al-Jazeera Mubasher Misr, which was still on the air. Another group of Islamist exiles took root in Turkey, and began putting together new satellite channels they hoped would fill the void that was created on July 3.

That December, Raba’a was one of the first channels to broadcast from Turkey, at first providing very limited programming and video loops of the massacre at Raba’a Square. One of the first programs on the channel was called Misr Islamiya, and was hosted by Al-Jamaa Al-Islamiya’s Assem Abdel Maged, who used his new platform to conduct the anger-fueled sectarian rhetoric that he had on the stage in the square, and on Al-Hafez before that.

As Qatar willingly shut down Al-Jazeera Mubasher Misr in what appeared to be the beginnings of a rapprochement with Egypt, more channels began appearing from Turkey. Misr Al’aan, whose personalities generally mirror the ones that were on Brotherhood-run Misr25, began providing an active programming schedule, while another channel called Makemeleen became the megaphone for leaks featuring audio from Sisi and other high-level government officials.

For the most part these Islamist channels have picked up where they left off in 2013. They continue providing a medium for Islamist voices stifled inside Egypt’s borders, but also remain a source for vitriol, incitements to violence, and sectarian rhetoric. Like their pro-Sisi counterparts in Cairo, which have generally fallen in line with the government narrative, pro-Morsi channels have a culture driven by appeals to emotion and conspiracy theories. The channels still dedicate significant airtime to directing hatred at Christians, whom they claim are accomplices in the oppression of Sisi’s regime.

Mohamed Nasser, the face of Misr Al’aan, has accused Christian charity organizations of conspiring with the state to convert poor Muslims as part of Sisi’s ‘war on Islam,’ aa theory included in an official Brotherhood statement.

Gauging viewership across Egypt’s satellite channels has proven difficult and there is no reliable data available that suggest the size of the Islamist channels’ audiences. However they are accessible to Egyptians with satellite boxes and also have active YouTube accounts that regularly upload new videos. Subscriber counts, which admittedly do not necessarily reflect Egyptian viewership alone, are lower than subscriber numbers of mainstream Egyptian satellite channels. Mekameleen, for example, has about 32,000 subscribers, while anti-Islamist channel CBC has close to 500,000, ONTV has around 700,000, and Sada El Balad has 102,000. (This also comes with the caveat that, according to some estimates, in 2014, 94.1 percent Egyptians got their news from TV—95.8 percent of which watch satellite channels—while only 23.2 percent used the Internet—80.1 percent of which used it to get the latest news.)

The notoriety of these channels, however, has been enough for the government to take note of them and publicly call for them to be shut down. It has pursued the closure of these overseas channels through diplomacy, with the Ministry of Foreign Affairs calling on France’s Eutelsat, which carries Al-Sharq, a channel owned by Brotherhood loyalist Bassem al-Khafagy, to take the channel down. However the cold relations between Cairo and Ankara have provided Islamist opposition a safe haven to operate their channels from there. In May, Raba’a was taken down by Bahrain’s Noursat and Eutelsat, and “on the grounds of inciting violence.” The foreign ministry asked Eutelsat to do the same This forced the channel, which features incendiary ultraorthodox preacher Wagdy Ghoneim, to re-launch under its new name, Al-Thawra.

Efforts, though, to take these channels down have created obstacles for those in Turkey. Misr Al’aan disappeared for two weeks this summer and blamed Sisi’s government for temporarily succeeding in keeping them off the airwaves. The government, however, has not made any public statements about the hiatus.

In a precarious position, the Muslim Brotherhood has carefully calculated its public communication. Thousands of articles were taken down from its official website, which had served as a news portal for years. These articles ranged from dry news stories, to analysis, to opinion pieces by leading members and supporters. Similar to the satellite channels, the Brotherhood’s website often resorted to sectarianism and conspiracy theories. After the overhaul, the website now only publishes official statements from the group.

Misr Al’aan, which closely resembles the defunct Misr25, dedicates most of its airtime to individuals who are sympathetic to the Brotherhood, but do not formally represent its leadership.  Brotherhood leader Gamal Abdel Sattar is an exception in this case. As a regular on Mekameleen and Misr Al’aan, he has presented a more radical line than the official one of his group, questioning a peaceful resistance and calling on had al-haraba, measures for severe crimes in Islamic law that include public executions, to be implemented for Sisi and his supporters.

The past three years have demonstrated that even in the face of intense state suppression, the continuation of media mouthpieces is a priority for Islamic opposition, including the Brotherhood, who understand the power of the media as much as the president who has spearheaded that suppression. Pro-Morsi media has succeeded in remaining one step ahead of the crackdown targeting them and have parlayed their exile into the revival of Egyptian Islamist media, which has allowed voices, even those projecting hatred, stifled within Egypt to be given a platform overseas.

Basil El-Dabh is a Cairo-based editor and writer. He was formerly Politics Editor at the Daily News Egypt, and his work has been featured in the Middle East Institute, Tahrir Squared, and the Tahrir Institute for Middle East Policy. He graduated from Georgetown University with a degree in Political Economy and has lived in Egypt since 2010.