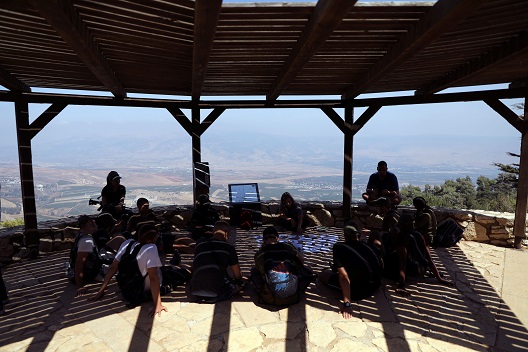 A number of unusual Israeli air strikes into Lebanon at the weekend have brought Israel and Lebanon’s Hezbollah organization potentially closer to conflict today than at any other time since the end of the month-long war between these two foes in July-August 2006.

While neither side seeks a renewed confrontation—one that would certainly dwarf the scale of the 2006 war—Israeli Prime Minister Benjamin Netanyahu is pushing brinkmanship to the limit with apparent unmanned aerial vehicle attacks on the southern suburbs of Beirut and a reported subsequent air strike against a Hezbollah-allied Palestinian faction the following day. The air attack against a base of the Popular Front for the Liberation of Palestine-General Command on a remote and lofty plateau on Lebanon’s eastern border with Syria, if confirmed, would be particularly egregious as it came just hours after Sheikh Hassan Nasrallah, Hezbollah’s leader, delivered a stern warning that his party would retaliate for the earlier drone strikes in southern Beirut and another in Syria which left two Hezbollah fighters dead.

The air strikes on southern Beirut and against the PFLP-GC base near Qussaya in the eastern Bekaa Valley appear to be the first overt Israeli attacks on Lebanese soil since February 2014. Indeed, Israel’s actions over the weekend represented a bold breach of the rules of the game that have existed for five-and-a-half years. Those unwritten rules stated that Hezbollah, and its patron Iran, would generally turn a blind eye to Israeli attacks on its facilities and weapons caches in Syria, but any attacks into Lebanon would meet with retaliation.

This rule was laid down on in the wake of an unclaimed air raid on February 24, 2014 against a drive-thru utility building located on a track used by Hezbollah to transfer weapons from Syria into Lebanon near the village of Janta on Lebanon’s eastern border. The attack likely intercepted an arms transfer operation—subsequent Google Earth imagery showed the building was completely destroyed. A Hezbollah media outlet very quickly asserted that Lebanese territory had not been targeted. In other words, it had nothing to do with Hezbollah. However, two days later, Hezbollah formally announced that one of its facilities had been attacked in Lebanon, that there had been some material damage and there would be a retaliation. Hezbollah did not need to deliver this statement for domestic consumption. Residents of the Bekaa Valley had seen the flashes of light in the night sky and heard the bangs, but no one could drive up to see for themselves which side of the border the bomb craters were located as the area was a sealed-off Hezbollah military zone. This was a statement directed at the Israeli government and military.

There followed over the next three weeks a number of unclaimed attacksagainst the Israeli army, all but one emanating from the northern Golan Heights where Hezbollah at the time had a presence. The attacks culminated in the wounding of four Israeli soldiers in a roadside bomb ambush near the Druze town of Majdal Shams. The Israelis got the message and there were no more overt air strikes into Lebanon, even as the rate of attacks against Hezbollah and Iranian targets in Syria gradually intensified.

Nearly a year ago, in an address to the United Nations General Assembly, Netanyahu showed satellite images of several buildings in southern Beirut that he claimed were Hezbollah missile-manufacturing sites. The strategy of going public with such sensitive information was interpreted as an attempt to put pressure on the Lebanese government to do something about these facilities and more broadly to badger the international community into taking action to prevent Iran strengthening its presence in Lebanon and Syria. Public diplomacy was seen as preferable to the riskier alternative of attacking the buildings, thereby breaching the rules of the game and risking an escalation that could trigger a war. That cautious policy appears to have ended on Saturday night with the attack in southern Beirut by what Hezbollah claims was two explosive-armed drones.

An earlier air strike south east of Damascus killed two Hezbollah operatives whom Israel accused of preparing for an Iranian-led drone attack into Israel. The deaths of the Hezbollah men and the unusual drone raid into southern Beirut compelled Nasrallah to deliver his vow of retaliation. As in past situations, Hezbollah will retaliate but will find a way of calibrating its reprisal to give Israel an admonitory slap, but without striking so hard that it compels a counter retaliation that could place the two enemies on the path to war. Hezbollah could mount an improvised explosive device (IED) or anti-tank missile ambush from south Lebanon or the Golan Heights against Israeli military targets along the border. It could come up with something innovative, such as a guided missile attack against a specific target deeper inside Israel or possibly deploy one or more of its own drones for a cross-border strike in an attempt to achieve a semblance of parity with Israel’s aerial operation at the weekend.

The more curious question is what motivated Netanyahu to undertake such a risky operation. An air strike against a Hezbollah target in a remote region of the Bekaa Valley is one thing, but dispatching two explosive-laden drones into the densely-populated southern suburbs of Beirut would seem particularly reckless. It is possible that Israel discovered a target so threatening or sensitive that it deemed an air strike a necessary risk. The Times of London cited intelligence sources as saying that the target was a truck carrying machinery to mix solid propellants for missiles. The two drones were apparently off-the-shelf rotary systems which adds to the mystery as these drones have a relatively short range, meaning the controller would have to be in the vicinity of the target.

On the other hand, intelligence sources suggest that the drones could have been launched at some distance from Beirut—such as from a sea vessel—and then guided onto target by a more conventional military unmanned aerial vehicle which would have flown above the two smaller drones and relayed the signal from the ground base. This would have greatly extended the range pf the two mini attack drones. Diplomatic sources in Beirut say there was more than usual Israel aerial activity in Lebanese skies at the time of the attack and in the immediate aftermath. Perhaps, Israel hoped the explosions and subsequent fire would destroy all evidence of the relatively small and fragile delivery systems and therefore erase any Israeli fingerprints.

Another potential motivation is the looming elections in Israel. Was Netanyahu attempting to burnish his reputation as “Mr Security” ahead of the polls? If so, he would do well to remember the fate of one of his predecessors, Shimon Peres, who in April 1996 launched a two-week air and artillery blitz against south Lebanon in an attempt to curb Hezbollah’s resistance campaign against the then Israeli occupation and to boost his security credentials ahead of an election in which Netanyahu was his main challenger. The campaign turned into a human tragedy for Lebanon and a political disaster for Peres when Israeli artillery gunners shelled a United Nations base in south Lebanon where some 800 Lebanese civilians were sheltering. More than 100 of them were killed in the shelling, effectively destroying Israeli and US plans to weaken Hezbollah. One result was a multi-nation agreement dictating the rules of fighting in south Lebanon which implicitly recognized Hezbollah’s right to resist Israeli occupation. The other result was Peres losing to Netanyahu at the polls the following month. Flexing military muscles against Hezbollah ahead of an election can be a risky maneuver for an Israeli politician.

Image: Israeli soldiers sit beneath a shade at an observation point overlooking Lebanon, near Kibbutz Misgav Am, in northern Israel, close to the border with Lebanon August 28, 2019. REUTERS/Ammar Awad