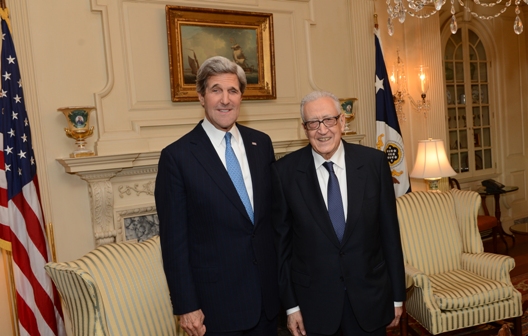 Advocates of US military action in Syria and substantial support for the armed opposition have lost the argument in Washington. At the very least, they have lost the full attention of President Barack Obama, which they enjoyed briefly after the August 21 chemical weapons attack. It is time for supporters of the uprising within or outside of the United States to acknowledge this harsh reality, and develop a strategy based on US diplomatic leadership in support of a serious coordinated effort by regional allies.

That the United States so eagerly wanted to avoid taking action to weaken Syrian President Bashar al-Assad proved that current US policy is not aimed at overthrowing the Syrian regime. Assad’s removal would have pleased Obama—provided that it entailed little political risk, demanded minimal resources, and did not empower jihadist militants—but idle preference, however, is not policy. US actions reflect President Obama’s assessment that removing the Assad regime and addressing what comes next is simply not worth the cost.

As the chances for US military action in Syria wither away, the Syrian opposition should quit wasting time and energy lobbying and hoping for it. A serious US effort to finance, arm, and train moderate rebel groups appears almost as unlikely, notwithstanding the administration’s claims to the contrary. The announcement by the “London 11”—which includes the United States and key allies—pledging greater support to the rebels is an encouraging sign of US efforts to coordinate allied efforts to strengthen the opposition. It is not likely however to herald a substantial shift towards arming the rebels, given President Obama’s assessment of US interests in Syria. More likely, the president sees the London 11 mechanism as a useful tool with which to pressure the opposition coalition to attend the ill-fated Geneva II conference, which is somehow supposed to involve the regime negotiating itself out of power while enjoying a military advantage.

It is time for supporters of the Syrian revolution in both the US policy community and the Syrian opposition to advocate a different US strategy—one that accounts for President Obama’s deep hesitation towards arming and financing rebel groups, his adamant opposition to even limited military action, and the rise of sectarian extremists in Syria. This strategy must reflect the options realistically available to those who seek to replace the regime with something more civilized, and should prioritize the following:

1. US transparency towards and engagement with regional allies

In the absence of direct US involvement, Qatar, Saudi Arabia, and Turkey are the regional powers best-resourced and positioned to facilitate a moderate opposition victory. The United States should drop the confusing and contradictory rhetoric of the last two years that seemed to imply robust US support for the uprising. This posturing is irresponsible and dangerous—the war in Syria is not a passing electoral issue to be addressed so superficially, as if part of some communications strategy. The United States must be honest with its allies about its unwillingness to get involved militarily in Syria, which they in turn should recognize as the current reality of US policy under the Obama administration.

US allies—abandoned, adrift, and confused by mixed signals from Washington—maintain an improvisational, uncoordinated, and ad hoc stance in pursuit of narrow short-term interests. Here, a US diplomatic commitment can focus allied efforts, and help guide them towards an agreement on who to support in Syria and how. All the better if money and weapons flow through the US-endorsed Supreme Military Council and General Salim Idris, but most importantly, the right groups must receive the right level of support in pursuit of the right objectives. Empowering moderate rebels at the expense of the regime and extremists is a clear and uncontroversial interest of both the United States and its allies.

The London 11 announcement is encouraging, not because it indicates a shift in US military support for the armed opposition, but because it shows an apparently serious effort at US international leadership and guidance, spearheaded by US Secretary of State John Kerry. Critically, it also has enjoys the at least passive support from President Obama. Without US leadership, its allies will continue to cynically support whoever can get the job done against the regime in Syria—currently, the jihadists—to the detriment of all, making the ultimate objective of overthrowing the Assad regime infinitely more difficult.

2. Joint efforts by the US, regional allies and the opposition to galvanize a rebel offensive to defeat al-Qaeda-affiliated Islamic State of Iraq and Greater Syria (ISIS)

Moderate rebels admit to an inevitable showdown with ISIS due to deep ideological differences and ISIS’ nihilistic extremism and brutality. However, moderates prioritized the fight against the regime, and felt that ISIS’ military strength made it a necessary evil until Assad fell. By now, it is painfully clear that allowing ISIS to establish a presence in Syria was a grave mistake. The resulting sectarianism, cruelty, and hostility to Syrian nationalism have prevented critical segments of the Syrian population from backing the revolution. Worse, ISIS’ barbarism has strengthened the regime’s claims that it is fighting a war against terrorists, not a national liberation movement. ISIS’ high profile operations, slick media productions, and public displays of brutality have allowed jihadists and the regime to capture and mutually reinforce this narrative, to the detriment of the rebel cause locally and internationally. This development has made it harder for advocates to make the case for a rebel victory to skeptical US policy-makers. Supporting a war-within-a-war against ISIS would benefit the United States, its regional allies, and Syrians alike. It would not be a distraction from the war on the regime, but an integral part of it.

3. A new and meaningful US diplomatic strategy

For too long the United States has lazily insisted on a vague diplomatic resolution to the conflict without explaining how exactly it would come about. This meaningless rhetoric needs to stop. It only embarrasses, weakens, and confounds US allies and the moderate opposition, while emboldening the regime and its supporters.

If the United States really seeks a diplomatic solution, it needs to convince the regime that the war is not winnable. Thus far, it has done the opposite: it has signaled its lack of faith in the opposition’s military struggle; it has embarrassed its allies by simultaneously abandoning them and pressuring them to enter negotiations with a regime that has already made clear would not address opposition grievances; and it has made Geneva II, which calls for an inclusive, consensus-based political transition in Syria, the laughing stock of the regime and rebel groups alike.

Without providing the regime with incentive to negotiate away its monopoly on political power, US insistence on a diplomatic settlement harms the moderate opposition’s standing among the long-suffering people of Syria. If the United States truly wants a meaningful political transition in Syria, its actions should support its objective and a coherent strategy, or at least stop undermining the efforts of allies. Until that happens, Geneva II can wait.

In their desperation, and amidst confusing signals from the United States, the opposition coalition has substituted hope of US support for a real strategy. This has stifled creative thinking and shifted responsibility for the armed struggle from the opposition to the United States—a responsibility that President Obama has made clear he does not want to bear. Waiting for American military intervention as the deus ex machina was understandably tempting once upon a time, but the opposition and its US and regional supporters must now work together to liberate Syria without relying on the enthusiastic support and commitment of President Obama. To do otherwise would keep Syria on its current path to a dystopian future at the hands of the Assad regime and its jihadist enablers.