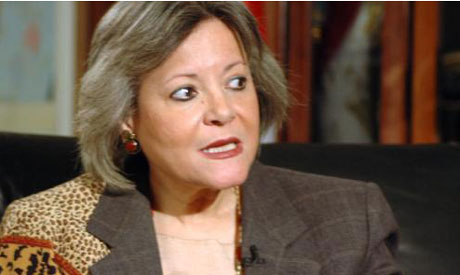 It’s nice to remember that even in times of turmoil and violence, Egyptians can be relied on for their razor-sharp political satire. Although the debate over Egypt’s new constitution has taken a back seat to more immediate concerns — the clashes in Tahrir Square and a mind-bogglingly complex three-stage electoral marathon to elect the lower house of parliament — a satirical proposal for the new charter was posted on the website Arabian Laws.

It looks like the authors haven’t made much progress toward completing the document, but the first three clauses poke fun at Minister of Planning and International Cooperation Fayza Aboul Naga, who has been a seemingly intractable fixture of Egypt’s government since the Mubarak era. Appointed minister in 2001, Fayza has spent over a decade antagonizing two White House administrations over the policy U.S. assistance to Egyptian NGOs and has managed to survive a staggering number of cabinet shakeups. And she’s not planning on retiring anytime soon, according to this comedic rendering of the new constitution:

The Arab Republic of Egypt is a state with a democratic system, based on citizenship, and the Egyptian people are a part of the Arab nation working toward achieving its comprehensive unity. And Faiza Abul Naga is the Minister of International Cooperation.

Islam is the religion of the state, and the Arabic language is its official language. The principles of Islamic law are the chief source of legislation. And Faiza Abul Naga is the Minister of International Cooperation.

Sovereignty is from the people only, and the people are the source of authority. The people practice this sovereignty and protect it, safeguarding national unity. And Faiza Abul Naga is the Minister of International Cooperation.