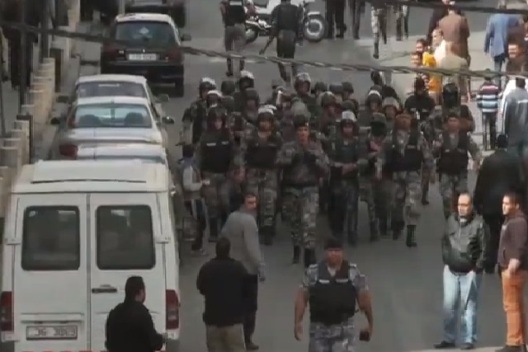 Jordanians affectionately refer to their country as “the black hole of the Middle East” for a reason. For any native, underneath all the presumptuous assertions that “I don’t fear the mukhabarat! I’m not afraid to speak my mind in this country,” and “We have freedom of speech—the government wouldn’t do anything to harm us,” there is an understanding to keep your mouth shut. It is common to hear a Jordanian claim that “the walls have ears” and that you can have a conversation about anything but politics. If you say one wrong word, you get sucked into the “black hole” where, as an ex-intelligence agent described it, “you cease to exist.”

In this case, the Hashemite monarchy’s ability to maintain a steady sail during the turbulent winds of the Arab Spring is a double-edged sword. What was once a source of international praise has now evolved into a government excuse for the suppression of freedom of speech, and, ultimately, a crackdown on dissent—which may be the last remaining check on the monarchy.

Since the storm passed and the spotlight shifted, it seems that the government is not only reverting back to its original subversive attitude towards political speech, but also extending its hand even further into the press and new media. The country’s primary and largest news publication Al-Rai, and its English-language sister publication The Jordan Times, suspended their publications on November 11 for the first time in their histories. The decision came in protest of the prime minister’s interference with the newspaper’s operations.

This is only one instance in a wider pattern of the government undermining freedom of speech. A 2012 amendment to Jordan’s Press and Publications Law implemented stringent policies on press websites that not only created legal roadblocks but also mandated the government’s involvement in editorial content. It also made site owners responsible for any comments made on their respective sites, creating pressure to preemptively censor user-posted content. As a result of the new amendments, the government shut down 300 websites in June 2013 for not obtaining the necessary licenses.

During the Arab Spring, the Jordanian government took shrewd measures to deflate growing pressures within the kingdom. Basically, instead of fanning the flames, the monarchy said, “Get it all out of your system.” In a move that was viewed in high regard, the government allowed people to publicly assemble without prior permission and restrained itself from exacting violent crackdowns on protests like the ones ravaging its neighboring countries. While these grand public gestures painted the monarchy in a positive light in the eyes of Jordanian loyalists and the international community, a Human Rights Watch report reveals that since the Arab Spring, at least seventy protesters have been charged in the State Security Court (SSC), the country’s military tribunal.

The government’s deteriorating protection of civil freedoms has culminated in a roundup over the past several weeks of top national movement leaders throughout the country. September kicked off with an expansion of the SSC’s jurisdiction over all cases involving drugs, counterfeiting, espionage, treason, and terrorism. Within the following two months, the government carried out a series of arrests on charges of undermining the regime and being contemptuous and disrespectful to heads of states.

The first of those arrests involved three young men who possessed R4BIA signs in support of the Egyptian youth movement that denounced the influx of violence against Muslim Brotherhood supporters in Rabia al-Adawiyya after Egyptian President Mohammad Morsi’s removal. The Islamic Action Front (IAF), the political arm of the Muslim Brotherhood, is the Hashemite monarchy’s primary opposition. The arrests of Jordanian R4BIA supporters seemed not only to seek the undermining of the IAF in Jordan, but also to send a strong message to its members. The government’s suppression of free speech seems to be selective in this regard, as it gave the green light for loyalists to launch an anti-MB media campaign in July.

In addition to charges of undermining the regime and facing five years in prison, one of the young men also faces a separate charge for disrespecting heads of state after investigators found messages on his phone criticizing Jordanian King Abdullah II, Egyptian commander-in-chief Abdel Fattah al-Sisi, and Syrian President Bashar al-Assad (The Jordanian government recently shifted to a neutral position with the Syrian regime).

Shortly thereafter, security forces arrested a man passing out R4BIA posters in the Zarqa municipality. Reports surfaced of another eleven arrests of IAF youth leaders, followed by yet another series of arrests made in the days leading up to Eid al-Adha of youth activists from Tafileh—one of Jordan’s major hotbeds of pro-democracy activism and the first movement to call on the ousting of the king following his unfulfilled promises of reform. The arrested youth will be tried in the SSC rather than civilian courts, possibly restricting them from their right to a fair trial. As the government continues to round up the movers and shakers of political dissent in the country, many political and social activists fear that they could be headed straight for the “black hole.”

After years of watching their neighboring countries go up in flames as a result of social upheaval, the average Jordanian is holding onto any source of stability in fear of a violent alternative. The government capitalizes on this reality by using the preservation of stability as an excuse to step on Jordanians’ fundamental rights. While these rights are perceived as guaranteed by the constitution, the penal code—which punishes certain types of expression, assembly, and association—completely negates them.

Though Jordan continues to call itself a “role model of reform” in the region, the government’s actions not only inhibits the country’s progress, but actually reverses the promise of the Arab Spring; in effect, the regime’s biggest accomplishment might only be preying on—and further inciting—fear amongst Jordanians.

Amani Al-Khatahtbeh is a Jordanian blogger based in the greater New York City area working as the editor-in-chief of MuslimGirl.net.

Image: During the protests in November 2012, Jordan police reinforcements in Amman are sent to areas of protest to keep the situation under control. (Photo: Wikimedia)