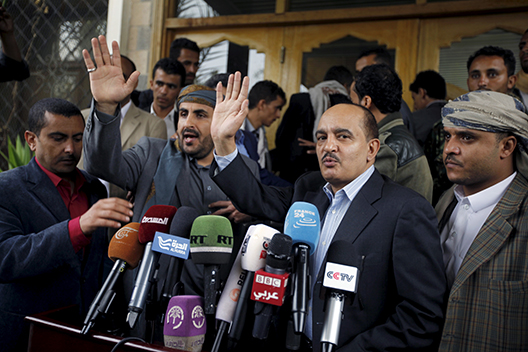 The talks at the GCC summit this week provide an opportunity for President Barack Obama to address the war and humanitarian crisis in Yemen. The delegation representing the Houthis and ousted president Ali Abdullah Saleh’s General People’s Congress (GPC) delegations finally turned up today for peace talks in Kuwait, but the prospects for ending the war soon are hanging by a thread. Obama’s visit to the region could keep the possibility alive by encouraging Saudi Arabia to adhere to the ceasefire whether or not the talks produce immediate results.

In just over a year, the war has created a massive humanitarian disaster, made the region more unstable, and put the United States under international scrutiny. Figures from 2015 show that at least 21.2 million are in need of humanitarian assistance and 14.4 million are food insecure. In January 2016, civilian casualties topped 8,100. The United Nations accuses Saudi Arabia of violating international law by targeting civilians, and the United States (and other nations) are coming under increased international and domestic scrutiny for supplying weapons that are killing civilians. In a clear criticism of Washington’s role, US Senator Chris Murphy put forward a bill to restrict US munitions sales to Saudi Arabia because of its role in the war.

Washington insists that it is providing intelligence to Saudi Arabia to reduce civilian casualties, but US munitions have been used repeatedly in the aerial bombing of schools, hospitals, markets, weddings, and other civilian sites. Human rights groups have documented US-manufactured cluster bombs recovered from civilian sites, despite an international convention banning their use. The United States has not signed that treaty, but the use of those munitions on Yemeni communities has brought increased criticism of the US role in the war. And if one of Washington’s primary goals in the region is to decrease Islamist extremism, the war in Yemen has, without question, produced precisely the opposite result.

The April 11 ceasefire was violated on both sides, so often, in fact, that Yemeni voices on social media mocked reports that it was tenuously holding. Still, maintaining the ceasefire will be crucial for building trust as the talks get underway. Big breakthroughs are not likely, but small agreement can provide the building blocks to a larger peace. As that happens, other parties to the conflict will need to be included.

Most significantly, the Southern Movement, or Hirak, comprised of hundreds of smaller groups, is not at the table. Tens of thousands of southerners turned out for demonstrations in Aden on Sunday and Monday, waving pre-unification flags and demanding self-determination. Likenesses of northerner and newly appointed Vice President General Ali Mohsen al-Ahmar were burned and defaced, the acts photographed and circulated on social media to ensure that they were seen. But one message was clear: southerners demand that their voice be heard.

Representatives of the Islamist Islah group are also not represented at the talks. They have been fighting in support of the Saudi-led coalition in the south and especially Taiz. The Hirak and Islah are both currently allied with the Saudi coalition, but they share little in common other than opposition to the Houthis and Saleh. Numerous armed tribes, some temporarily aligned the northern alliance and others with the Saudi-led coalition, are also not included in the talks. The current talks are an essential start, but a more inclusive peace process, one that can see Yemen through a transition to a stable future in which all interests are considered—will require that a wider representation of interests inside of Yemen are invited to talks in the future. As one Yemeni told me, Saudi Arabia may be fueling the war, but only Yemenis will be able to make a lasting peace.

Still, the possibility for peace is still alive, and Obama has many reasons to push for it. Primary among them is the need to get the United States and Saudi Arabia out of this war. Despite Washington’s claims that it is only aiding the Saudi coalition, on a practical level the United States is a directly engaged: it is selling munitions to Saudi Arabia that it knows will be deployed in Yemen; it is providing intelligence to the Saudi coalition; and it has carried out more than 700 mid-air refueling missions for Saudi-coalition planes actively bombing sites inside of Yemen. Legalistic arguments that the United States is not “at war” with Yemen obscure the common sense that it is more engaged than some other members of the Saudi-led coalition. US support for Saudi Arabia is not lost on the Yemeni people, either, which is not in the long-term interests of the United States. By pressing for a continuation of the ceasefire—even if some parties to the conflict inside Yemen violate it, which they will—Obama could keep open the only potential road that could end the war in Yemen in the near future.