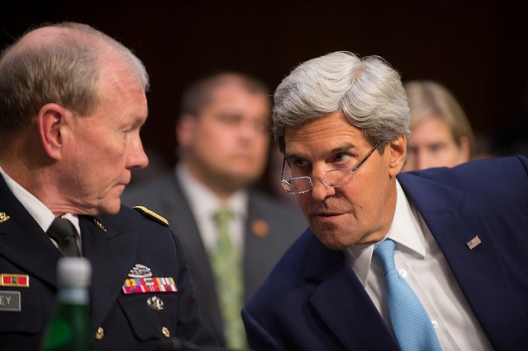 Congress needs to check itself.

As it considers the use of force in Syria, Congress will enjoy considerable control over the authorizing resolution’s language. To begin with, under the US Constitution, Congress has the power to declare war, to raise and maintain armed forces, to control the purse. Moreover, while the president has competing constitutional claims as commander-in-chief, he has asked Congress for the authority to use force and thereby finds himself in a precarious political position. He recently waged war in Libya without specific or standing authorization from Congress. He spent two years arguing against intervention in Syria. Now, he is asking a Congress that he previously ignored to authorize a war that he previously condemned—all with a war-weary American public watching.

Against this backdrop, Congress must restrain itself from improperly or imprudently impeding the president’s power to wage war. Of course, Congress may reject the use of force in Syria. (This presumes the president does not move forward based on separate, more questionable, constitutional and legislative grounds.) Alternatively, Congress may authorize force within certain parameters: It may, as it has already proposed, require the Obama administration to justify the use of force, act within a certain window, explain its plan, report back periodically, and comply with the subsequent revocation or expiration of authority.

But Congress may not command by proxy. In other words, it may not endeavor to execute by seeking to control whether and how the president deploys and commands the US Armed Forces in a prospective campaign.

American legislators have tried to do just that. During a recent US Senate Foreign Relations Committee (SFRC) hearing, for instance, US Senators repeatedly declared that they would expressly prohibit boots on the ground in Syria. In a separate hearing, members of the US House of Representatives declared that they would seek similar limitations. Later, during a radio interview in his home state, US Senator John McCain (R-AZ) said no American boots would hit the ground because “there would be an impeachment of the president if they did.”

Meanwhile, while testifying before the SFRC, US Secretary of State John Kerry pushed back against this impulse to impede:

It would be preferable not to [expressly prohibit boots on the ground]—not because there’s any intention, or any plan, or any desire whatsoever to have boots on the ground. I think the president will give every assurance in the world … But in the event Syria imploded, for instance, or there was a threat of a chemical weapons cache falling into the hands of al-Nusra or someone else, and it was clearly in the interest in our allies and to all of us—the British, the French and others—to prevent those weapons of mass destruction from falling into the hands of the worst elements.

Mindful of the need to work out mutually agreeable language, Kerry then stressed he was only raising a hypothetical and effectively distinguished between—to put it glibly—“combat” boots and “containment” or “clean-up” boots. He also repeatedly reassured Congress that the president did not intend to deploy ground forces. In essence, then, Kerry offered political assurances in exchange for legislative understanding.

In its draft Joint Syria Resolution, the SFRC has tried to split the baby: “The authority [granted by Congress] does not authorize the use of the United States Armed Forces on the ground in Syria for the purpose of combat operations.” In a sense, the SFRC has sought to limit this war’s scope while allowing the president to command as needed. By expressly prohibiting only “combat” boots, Congress has left the door ajar for “containment” or “clean-up” boots. Conceivably, armed with this qualifying language, the president may respond to escalation, retaliation, or proliferation: He could, for instance, act to contain the spread of chemical weapons, clean-up contaminated areas, and/or prevent the Syrian regime from using them to punish civilians, allies, or American troops in the region.

But neither law nor war are quite so tidy. Congress has acted improperly and imprudently. To begin with, Congress has improperly sought to restrict the president’s power. Once at war, the president can, must, and is constitutionally empowered to deploy and direct troops as he—the commander-in-chief—believes he must. Beyond that, Congress has imprudently assumed that it can plan against any contingency and has simultaneously stumped against US boots on the ground while permitting them for certain purposes. If the president determines he must use the US Armed Forces—ground troops, naval officers, pilots, drone masters, cyber-warriors—in combat, then he will use them in combat. And if the president determines he must deploy forces only for permitted uses, those troops may have to engage in combat to achieve non-combat goals. US and allied troops, potential enemies, and the world will not worry themselves with what Congress calls combat.

Congress understands that war may require the president to act in a manner not contemplated or advertised now. Elevating politics and posturing over policy and prudence, certain lawmakers have simply sought to wash their hands of the uncertainties of war. If they authorize the use of force while infringing upon the president’s ability to command, they will have sent the US Armed Forces to war—armed hostilities, tailored use of force, whatever—in the shadow of institutional incoherence and constitutional conflict.

Congress has better options. To prevent war, Congress may vote against it. To prevent mission creep or a prolonged war, Congress may establish various parameters, like requiring the Obama administration to justify the use of force, act within a certain window, explain its plan, report back, and comply with subsequent revocation or expiration of authority. But Congress may not, and certainly should not, “take off the table an option that might—or might not—be available to the president of the United States that would secure our country.” Political assurances should be enough.

Ultimately, of course, the SFRC will craft—and the president will accept—language that comforts the Congress. As Kerry’s attempt to retract his hypothetical demonstrates, neither the president nor senior members of his administration will check Congress now, as they seek authorization amid an unfavorable political climate.

And, so, Congress must check itself.

Anthony Elghossain is an attorney at a global law firm based in Washington, DC. He writes the Diaspora Diaries at NOW. Follow him @aelghossain