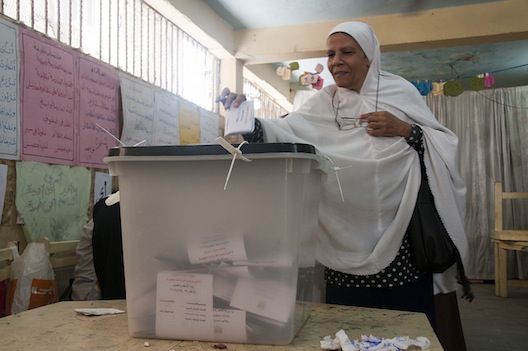 As Egypt prepares to go to a constitutional referendum in January, details have begun to emerge on party positions on the constitution, security measures for the referendum, and who will be monitoring in Egypt’s polling stations. With the final draft of the constitution submitted to interim president Adly Mansour, he has 30 days to call for a referendum.

When will the referendum be held?

Who is Monitoring the Referendum?

European Union: Egyptian media reports that European Union (EU) ambassador, James Moran has said that Egypt’s authorities invited the EU to monitor the referendum. However, due to the fact that little is known about the referendum itself, the EU has yet to decide the size of the delegation it will send.

Tamarod: Grassroots movement Tamarod announced it will supervise the referendum, placing as many as 10 representatives in each of Egypt’s 13,000 polling stations. The 130,000 Tamarod members will be wearing uniforms with the Tamarod logo on it.

Carter Center: US organization, the Carter Center announced it would send a a “small expert assessment team,” but that it has no plans to send a full observation team.

The Minister of Interior also announced that six international and 67 local NGOs have been granted permission to monitor the referendum. The names of the organizations were not announced.

Where does the pro-Morsi National Alliance to Support Legitimacy Stand?

The National Alliance to Support Legitimacy has yet to announce its official position – whether it will boycott or campaign for a ‘no’ vote. The NASL is made up of the Freedom and Justice Party, the Wasat Party, Jama’a al-Islamiya’s Construction and Development Party, the Salafi Watan Party and the Labor Party, among others. Parties within the NASL that have indicated a position, or are leaning toward a specific position, are listed below.

Who is campaigning for a ‘no’ vote?

Strong Egypt: The centrist party headed by former Muslim Brotherhood member Abdel Moneim Aboul-Fotouh has announced it will campaign for a ‘no’ vote. Aboul-Fotouh said he is calling for a ‘no’ vote because the constitution fails to promote social justice and makes the military ‘a state above the state.’ The party hasn’t stopped there. It has also filed a lawsuit to halt the referendum, and has also submitted a list of demands to the Supreme Electoral Commission to guarantee free and fair elections. Strong Egypt campaigned for a ‘no’ vote in the 2012 referendum too.

April 6 Movement: The April 6 Movement is campaigning against the constitution because “it allows military trials for civilians, immunizes Defense Minister Abdel Fattah al-Sisi in office for eight years, and the articles on social justice are not sufficient to achieve the goals of 25 January revolution.”

Watan Party: The Salafist Watan Party, which is a member of the pro-Morsi National Alliance to Support Legitimacy is pushing for the NASL to campaign for a ‘no’ vote, while most other members of the alliance are pushing for a boycott.

Who is campaigning for a ‘yes’ vote?

National Salvation Front: After initially announcing that it would campaign simply for people to vote without guiding their vote, the NSF announced it would campaign for a ‘yes’ vote. The NSF campaigned for a ‘no’ vote in the 2012 referendum.

Karama Party: The Nasserist Karama (or Dignity) Party is calling for a ‘yes’ vote.

Tamarod: The grassroots youth movement is calling for a ‘yes’ vote

Popular Current:  The leftist Popular Current founded by Hamdeen Sabbahi announced it will call for a ‘yes’ vote, despite its reservations over some articles in the constitution. The Popular Current campaigned for a ‘no’ vote in the 2012 referendum.

The Egyptian Trade Union Federation (ETUF): ETUF is also among those calling for a ‘yes’ vote on the constitution, despite significant objections to the removal of a constitutional article that guarantees a 50 percent quota for workers and farmers in parliament.

Nour Party:The Salafi Nour Party is the only Islamist party supporting the ‘yes’ vote, a stance that has garnered significant criticism from other Islamist parties, among them the Jama’a al-Islamiya’s Construction and Development Party, the Freedom and Justice Party, the `Fadila Party, and the Islamic Party. The Nour Party campaigned for a ‘yes’ vote in the 2012 referendum.

Wafd Party: The nationalist Wafd Party, which is a member of the NSF, will campaign for a ‘yes’ vote.

Who is campaigning for a vote, whether yes or no?

Constitution Party: The Constitution (or Dostour) Party, founded by Mohamed ElBaradei, is campaigning for people to participate in the referendum, but has not taken a specific position.  The party voted ‘no’ in the 2012 referendum.

What security measures are being put in place?

The Interior Minister announced that the ministry is working in cooperation with the Armed Forces to secure the constitutional referendum. He also said up to 100,000 officers and soldiers will take part in securing the referendum

What happens after the referendum?

Image: Photo: An Egyptian woman casts her vote in May 2012 (Foreign and Commonwealth Office)