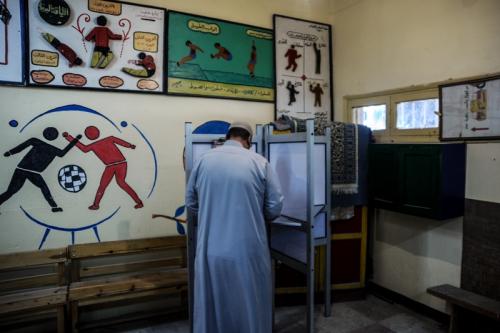 As Egypt prepares to go to the polls once again, voting for a second constitution in the span of three years, following are key updates on the referendum taking place on January 14 and 15:

When will the referendum be held?
The referendum will take place on January 14 and 15, across Egypt’s governorates, while voting for Egyptians abroad has already begun.

How was the constitution amended?
The constitution was first amended by a team of ten legal experts, whose changes were then presented to the Committee of Fifty, a group of fifty representatives tasked with reviewing the amendments. The Committee consisted of only one representative of the Islamist political current, with a member of the Salafi Nour Party. Rather than make make amendments to the existing 2012 constitution, however, the committee proceeded to draft a new constitution, adding 47 entirely new articles, with only 30 articles remaining completely unchanged from its 2012 predecessor. Read more about the committee’s work here.

Who is monitoring the Referendum?
67 local and 6 international organizations have been accredited by the High Electoral Commission to monitor the referendum. A complete list of the organizations is available, in Arabic, here.

The international organizations involved include:

Carter Center: US organization, the Carter Center announced it would send a “small expert assessment team,” but that it has no plans to send a full observation team. The center also issued a statement expressing concern over the current political climate in Egypt and its impact on the referendum.

Election Network in the Arab World (ENAR): ENAR has not released information on its team, but has been approved for a team of 200 observers.

Global Network For Rights And Development (GNRD): GNRD has not released any information on its team, but has been approved for a team of ten observers.

Local Egyptian NGOs participating in the monitoring process include the Egyptian Organization for Human Rights, the Police and People for Egypt, the Egyptian Association for Community Participation Enhancement, and the Centre for Egyptian Women’s Legal Assistance.

While it does not appear on the official HEC list, Grassroots movement Tamarod announced it will supervise the referendum, placing as many as 10 representatives in each of Egypt’s 13,000 polling stations. The 130,000 Tamarod members will be wearing uniforms with the Tamarod logo on it.

Who is campaigning for a ‘no’ vote?

April 6 Movement: The April 6 Movement is campaigning against the constitution because “it allows military trials for civilians, immunizes Defense Minister Abdel Fattah al-Sisi in office for eight years, and the articles on social justice are not sufficient to achieve the goals of 25 January revolution.”

Watan Party: The Salafist Watan Party, which is a member of the pro-Morsi National Alliance to Support Legitimacy is pushing for the NASL to campaign for a ‘no’ vote, while most other members of the alliance are pushing for a boycott.

Who is campaigning for a ‘yes’ vote?

National Salvation Front: After initially announcing that it would campaign simply for people to vote without guiding their vote, the NSF announced it would campaign for a ‘yes’ vote. The NSF campaigned for a ‘no’ vote in the 2012 referendum. The NSF consists of the Egyptian Social Democratic Party, Popular Egyptian Current,the Conference Party, the Free Egyptians Party, the Wafd Party and the leftist Tagammu Party. Popular Current:  The leftist Popular Current founded by Hamdeen Sabbahi announced it will call for a ‘yes’ vote, despite its reservations over some articles in the constitution. The Popular Current campaigned for a ‘no’ vote in the 2012 referendum.

Karama Party: The Nasserist Karama (or Dignity) Party is calling for a ‘yes’ vote.

Tamarod: The grassroots youth movement is calling for a ‘yes’ vote

The Egyptian Trade Union Federation (ETUF): ETUF is also among those calling for a ‘yes’ vote on the constitution, despite significant objections to the removal of a constitutional article that guarantees a 50 percent quota for workers and farmers in parliament.

Nour Party:The Salafi Nour Party is the only Islamist party supporting the ‘yes’ vote, a stance that has garnered significant criticism from other Islamist parties, among them the Jama’a al-Islamiya’s Construction and Development Party, the Freedom and Justice Party, the `Fadila Party, and the Islamic Party. The Nour Party campaigned for a ‘yes’ vote in the 2012 referendum.

Who is campaigning for a vote, whether yes or no?

Constitution Party: The Constitution (or Dostour) Party, founded by Mohamed ElBaradei, is campaigning for people to participate in the referendum, but has not taken a specific position.  The party voted ‘no’ in the 2012 referendum.

National Alliance to Support Legitimacy: The National Alliance to Support Legitimacy (NASL) – which consists of the Muslim Brotherhood’s Freedom and Justice Party, the Wasat Party, the Islamist ‘Amal (Labor) Party, the Watan Party, the Independence Party, and the Jama’a al-Islamiya’s Construction and Development Party, has announced that it will boycott the referendum. It has instead put out a call for protest on January 14 and 15. The youth coalition within the NASL, Youth against the Coup, has announced a plan to disrupt the referendum with acts of civil disobedience.

Strong Egypt: The centrist party headed by former Muslim Brotherhood member Abdel Moneim Aboul-Fotouh originally announced it will campaign for a ‘no’ vote. On January 13, following the arrest of three Strong Egypt party members for distributing posters campaigning for a ‘no’ vote, the party announced that it would boycott instead.  Aboul-Fotouh had said he is calling for a ‘no’ vote because the constitution fails to promote social justice and makes the military ‘a state above the state.’ The party hasn’t stopped there. It has also filed a lawsuit to halt the referendum, and has also submitted a list of demands to the Supreme Electoral Commission to guarantee free and fair elections. Strong Egypt campaigned for a ‘no’ vote in the 2012 referendum too.

Who can vote and where?

Egyptian citizens, 18 years and older, have the right to vote in all Egyptian elections. Those exempt from voting are members of the armed forces and of the police force.  Approximately 53 million eligible voters can participate in the elections, with 30,317 polling stations nationwide.

Originally, voters were only allowed to vote at polling stations they are registered at. On January 6, interim president Adly Mansour issued a decree amending the political rights law, allowing people to vote at one of 200 specially designated polling stations, if they are unable to vote at the polling station associated with their registered address on their national ID cards. While the Muslim Brotherhood’s Freedom and Justice Party has accused the government of intending to forge the vote, officials have said that there are measures  in place to prevent duplicate voting. A computerized database using a “closed information system network,” officials said, should allow polling stations to communicate with one another.

While only 16,000 judges will be supervising the referendum, each judge is allowed to supervise up to three polling stations simultaneously.  The complete official voter guidelines can be read here.

What security measures are being put in place?

The Interior Minister initially announced that the ministry is working in cooperation with the Armed Forces to secure the constitutional referendum. He also said up to 100,000 officers and soldiers will take part in securing the referendum. He later announced an increased number of up to 160,000 soldiers and conscripts securing the referendum. Security measures encompass the voters, the judges and employees overseeing the voting process, members of civil society organizations monitoring the polling process and domestic and foreign journalists covering it.

What happens after the referendum?