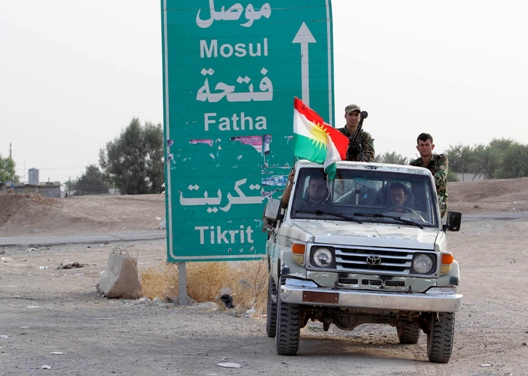 Despite the incredible gains that the Islamic State in Iraq and Syria (ISIS) has made in Iraq in the past few days, the Kurdish government has lent its security forces to aid in pushing the paramilitary group out of the north. But with the abandonment of Iraqi army posts, the Kurdish authority may now have more ambitious thoughts on the region. Kurdish authorities have given all but explicit indications that they do not plan on leaving seized territory from the collapsed Iraqi army. Holding on to areas of dispute between the Kurds and Baghdad provides an opportunity for the Kurdish administration to bolster its chances for independence.

In the last week, the Kurds have taken control of the majority of the disputed areas between Baghdad and Erbil, as delineated under Article 140 of the Iraqi constitution that expired in 2007. The article outlines steps towards a plebiscite that would decide whether the areas contest by Baghdad and Erbil would fall under the authority of the Iraqi government or the Kurdistan Regional Government (KRG).

The Kurds’ rising power in the region results from the weakness of an Iraqi army facing a jihadist onslaught by the experienced fighters of the ISIS. Many Iraqi soldiers immediately fled after facing off with ISIS fighters, fuelling theories that the ISIS take over is a conspiracy. More likely, however, tribal affiliation and some degree of corruption contributed to the Iraqi army’s collapse. Those Sunni officers unaffected by these factors likely felt that the Shia controlled government, adept at marginalizing any Sunni influence in Iraqi politics, was simply not worth dying for.

The Kurdish Peshmerga forces were ordered to not engage the ISIS in Arab areas and to protect just Kurds in the areas that are seen as part of the Kurdish homeland in Iraq. “President Massoud Barzani told us not to fight against anyone and to protect the areas that are Kurdish. We are not to enter one meter of Arabic land,” said Serdar Dosky, a member of Barzani’s Kurdistan Democratic Party. “We are not going to fight, we are only going to protect the Kurds. But if the they [ISISI] will come, we will wage war.”

Yunus Ibraihum, a Kurdish soldier that was wounded in clashes with the ISIS, said that the ISIS does not want to fight the Kurds, just the Iraqi army. Nevertheless, several clashes took place between Kurdish Forces and ISIS. One blast targeted the Peshmerga Minister Sheikh Jafaar Mustafa in Kirkuk on Thursday, but he escaped unharmed.

The Kurds have seized many Iraqi arms and equipments and now control the important Iraqi-Syrian border crossing in Rabia, and the city of oil-rich Kirkuk which includes the former US-controlled military airport. Major General Liwa Jamal Tahir, chief of the Kirkuk police, confirmed Kurdish control over the area apart from the Arab region just outside of Kirkuk. “The Kurds control the whole city of Kirkuk. On the outside of the city there are Peshmerga. The Iraqi army is completely gone.”

Near the city of Mosul, ground zero for the current crisis, Kurdish forces also now control both sides of a strategic border crossing with Syria. Hashim Sitay, the commander of the 8th division of the Kurdish Peshmerga in Mosul said that most of the Kurdish zones in the area are secure. “I am now in the middle of Rabia. It’s 100 percent under our control. There is neither Daash [ISIS] nor any government.” Sitay said they have not received any official instructions should Baghdad demand the return of these captured territories.

“We have not received any instructions from our ministry to give back this area to the Iraqi government in case of cooperation against the ISIS or not. This is not my decision. But it’s clear that nobody can remove us from here. This is very serious.”

Jabar Yawar, the spokesperson of the Kurdish Peshmerga armed forces was adamant that the Kurds would not return any territories seized from the collapsed Iraqi army under any condition. “We will not retreat from the territories we have conquered,” he told Rudaw. Kurdish officials suggest that the seizure is also related to the protection of Kurdish populations that are spread over the disputed areas including in areas that used to be under the Iraqi army’s control.

“We will not go away from Rabia, and I know from my government that we will not leave it, it’s the only way to Shingal,” said KDP-member Serdar Dosky.

“After the Iraqi army fled, we came to Rabia to protect the Yezidi’s [a Kurdish religious minority],” said Hadi Salih, a Kurdish soldier who was wounded when ISIS opened fire from the Syrian border.

The Kurds hope that by securing control over these disputed lands, Baghdad could no longer threaten their authority or jurisdiction. As they gain increased legitimacy in these areas, Baghdad would have little choice but to accept calls for Kurdish independence. “Iraq would be separated in three areas: Shiites, Kurds, and Sunnis, and then we will proclaim Kurdish independence,” said Ismet Xabur, a local Kurdish journalist of War TV.

Thus far, the Kurds are nowhere near directly challenging the Iraqi government and proclaiming independence. Kurds are still financially dependent on Baghdad and face opposition from regional and international actors—including the United States. Kurdish attempts at economic independence, however, may bring them one step closer to their dream of an independent Kurdistan. Negotiations are ongoing to independently export oil to Turkey, providing revenue that could supplant the Kurdish allocation in the Iraqi budget.

Wladimir van Wilgenburg is an analyst of Kurdish politics for the Jamestown Foundation currently reporting from northern Iraq.

Image: Members of the Kurdish security forces take part in an intensive security deployment on the outskirts of Kirkuk June 12, 2014. Militants from the Islamic State of Iraq and the Levant (ISIL) overran the northern city of Mosul earlier this week and have since pressed south towards Baghdad in an onslaught against the Shi'ite-led government. The Kurds, who run their own autonomous region in the north, have taken advantage of the chaos to expand their territory, taking control of the oil-rich city of Kirkuk and other areas outside the formal boundary of their enclave. Picture taken June 12, 2014. (Photo: REUTERS/Ako Rasheed)