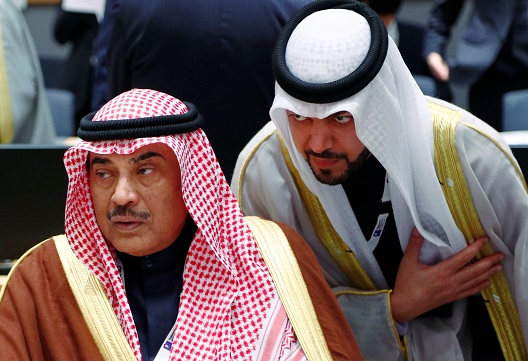 With the Syrian civil war winding down, politicians and observers alike recognize that President Bashar al-Assad has managed to retain his position as Syria’s head-of-state. Some countries have moved swiftly in acknowledging the outcome of the conflict by reinstating diplomatic ties with the Assad regime and reopening embassies in Damascus. The United Arab Emirates (UAE) and Bahrain, which, to varying degrees, opposed Assad after the civil war erupted, are two salient examples of this trend.

Other countries in the region appear more hesitant in re-normalizing ties with Syria’s government. The State of Kuwait is a case in point. The Kuwaiti leadership appears to have adopted a wait-and-see approach to the situation. Countries such as Saudi Arabia and the UAE have a vested interest in countering Iranian influence in the region. Kuwait, however, strives to maintain relative neutrality on most regional affairs, is less concerned about Iran’s hand in the Levant, and more interested in a foreign policy that rests on the principles of multilateralism, diplomacy, while acting in concert with its closest Arab/Islamic allies and Western partners.

As the Arabian emirate has demonstrated through its mediation efforts during the ongoing Gulf Cooperation Council (GCC) crisis, Kuwait is attached to the idea of multilateralism. Given its desire to remain neutral, multi-state organizations such as the GCC and the Arab League are important institutions that help Kuwait retain its influence in the region via a carefully crafted foreign policy that manages to resist pressure from larger powers in the neighborhood.

As a result, it is in Kuwait’s interest to divert decisions such as the recognition of Assad to these multilateral institutions. This is reflected in Kuwait’s rhetoric on the issue, stating that Kuwait City would wait for the Arab League’s ‘green light’ before committing to any particular approach to Syria. As has become apparent since the league’s latest meeting, there is not yet a consensus on readmitting Syria, although Assad himself recently claimed that most of the Gulf monarchies had come to a major understanding regarding Damascus.

Although multilateralism is one cornerstone of Kuwaiti foreign policy, the emirate’s humanitarian policies may be considered as equally important and are often worn by the country’s leading figures as a badge of honor. Since the Emir of Kuwait received the honorary award of ‘Exemplary Humanitarian Leader’ from UN Secretary General Ban Ki-moon in 2014, the Kuwaitis have gone out of their way to both commemorate the occasion and uphold their reputation of generous humanitarian donors.

As a result, Kuwait has sought to present itself as a regional hub for humanitarian aid and reconstruction, for instance through the recent summit on the reconstruction of neighboring Iraq. It has attempted to play a similar role in Syria, donating large sums of money to international relief totaling more than USD 1.6 billion over the course of the conflict. At the same time, many of the international organizations that Kuwait supports, the most prominent of which being UN relief missions, claim that Assad actively targets innocent civilians and has been responsible for numerous humanitarian tragedies.

Furthermore, although the Kuwaiti delegation to the UN Human Rights Council did not explicitly mention the Assad government when discussing the targeting of civilians, it did decry the use of illegal weapons and the perpetration of war crimes and crimes against humanity. If Kuwait really does take itself seriously as a humanitarian bastion in the Gulf, it will find itself hard-pressed to recognize the regime which they themselves hold accountable for human suffering in Syria of epic proportions.

Apart from Kuwait’s general opposition to recognizing Assad as the legitimate Syrian head-of-state, there are also several bilateral tensions which would give the Kuwaitis reason to pause. For example, in December 2018, Kuwaiti media obtained a  list of terrorists and suspected financiers of terrorism in Syria, drafted by the Syrian government, which included thirty Kuwaitis. The inclusion of high level officials such as the Deputy Foreign Minister al-Jarallah and several Kuwaiti MPs on the list did not help relations between the countries. Although the Syrians would categorically deny the existence of the list, the damage appeared to have been done at that point already, as Kuwait slammed the Syrian charges as ‘baffling’ and ‘slanderous’. Kuwait, for its part, also does not seem particularly fond of Assad’s associates, as they recently arrested a long-time resident of Kuwait with close ties to the Assad regime on money laundering charges.

A final issue concerns the problematic aspect of Kuwait’s parliament members funding terrorist organizations within Syria. Since the Kuwait 2016 elections, Sunni hardliners—which include Muslim Brotherhood members and Salafists—hold a significant number of seats in the National Assembly. As a result, members of these respective groups have often publicly opposed the Assad regime, claiming that Assad is a tool of the Russian and Iranian regimes that systematically represses Sunnis. These types of MPs support extremist groups and privately fund them. Kuwaiti monies donated to Syrian causes were augmented by local charity telethons on specific Kuwait television networks. Given the already fragile relations between the Kuwaiti government and the parliament due to the ongoing discussions regarding the sentencing of two MPs, the government will likely be reluctant to unilaterally engage with a topic as contentious as the future of the Assad regime.

Taking these considerations into account, Kuwait is likely to hold off on any decision related to Assad’s legitimacy until a consensus has been reached in the Arab League. Although Kuwait does not appear overly fond of the Assad regime, it will likely not stand in the way of the League readmitting Assad. By appealing to a consensus among Arab states on the issue, Kuwait could avoid critique from both humanitarian organizations as well as its domestic constituencies, as these groups would be more likely to accept Kuwait following a multilateral decision than they would support its unilateral recognition of Assad. At the same time, not outright opposing Assad and allowing the re-entry of Syria into the Arab League would help Kuwait in fostering future relations with Syria. Since pan-Arabism and opposition to Israel are another cornerstone of Kuwait’s foreign policy, a united front with Syria on both issues could greatly support Kuwait’s ambitions on these topics. Time will tell as Syria moves to its next chapter.

Theodore Karasik is the senior advisor at Gulf State Analytics (@GulfStateAnalyt), a Washington, DC-based geopolitical risk consultancy. You can follow him on Twitter @Tkarasik.