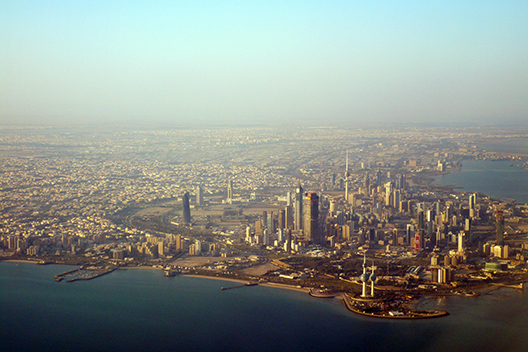 Although oil-rich, Kuwait has modest gas reserves. Consequently, the Arab Gulf state has been a net importer of the resource since 2008, and in 2009 Kuwait became the first Gulf Cooperation Council (GCC) member to import Liquefied Natural Gas (LNG). As a host of obstacles (contract structures, geological challenges, etc.) have hindered rapid expansion of Kuwait’s natural gas production, it has an increasing need for foreign natural gas supplies to meet domestic demand for electricity, water desalination, and petrochemicals, in addition to enhanced oil recovery techniques to increase oil production, which Kuwait depends on for 90 percent of government income.

Sitting on 18 percent of the world’s natural gas reserves, Iran would appear a logical supplier of gas for Kuwait, particularly in light of their geographic closeness and Iran’s potential to export gas at competitive prices. Bilateral tensions, Saudi pressure, and Kuwait’s domestic political developments have, however, prevented the Arab Gulf state from importing Iranian natural gas, despite years of talks between Kuwaiti and Iranian officials on a natural gas deal.

In the early 2000s, Kuwait and Bahrain began discussions with Iran over a 25-year pipeline supply contract, but talks failed due to disagreements over technical and pricing issues. In 2005, Kuwait and Iran signed a MoU for 3 billion cubic meters per year of gas supply, which also failed to come to fruition due to a disagreement over the pricing formula; the same scenario repeated itself in 2010.

Kuwait, Saudi Arabia, and Iran share a joint oil and gas field, called Arash in Iran (and Dorra in Kuwait/Saudi Arabia), which has been the center of much tension in Kuwaiti- and Saudi-Iranian relations. The dispute began in the 1960s over the demarcation of the boundary through the continental shelf. While the Kuwaitis and Saudis reached an agreement in 2000 on a maritime border deal, a similar deal has not been made with Iran. In 2011, an official in Tehran alleged that Kuwait and Saudi Arabia were stealing oil and gas from the field, while as recently as 2015, Kuwait accused Iran of seeking foreign investment in the disputed area.

Despite these sovereignty disputes and failures between the two countries to conclude a successful gas deal, diplomatic relations at the bilateral level improved throughout the 2000s. In 2006, Iranian President Mahmoud Ahmadinejad became the first Iranian leader since 1979 to visit Kuwait, where he referenced Kuwait and Iran’s territorial dispute: “There is no problem between us [Iranians] and the brothers in Kuwait which cannot be solved. But it needs some technical studies.”

In 2012, Mohammad Abdullah Al Mubarak Al Sabah, Kuwait’s then-Minister of Information, expressed support for Iran’s right to obtain nuclear power for civilian purposes, although only if Tehran complied with international safeguards. The following year, when Iran and global powers reached the interim nuclear deal, Kuwait and Qatar were the first GCC states to come out in favor of the agreement. Khaled al-Jarallah, Kuwait’s Foreign Ministry Undersecretary, expressed optimism about the interim deal leading to a permanent accord which could “defuse tension” and contribute to the “stability and security of the region.”

After Hassan Rouhani succeeded Ahmadinejad in 2013, his administration sought to improve Tehran’s relations with Kuwait and other GCC members. In 2014, Emir Sheikh Sabah Al Ahmad Al Sabah paid a historic visit to Tehran to meet with Iran’s Supreme Leader and Rouhani, marking the first visit of a Kuwaiti Emir to the Islamic Republic. That same month Kuwait’s Oil Minister Ali Saleh al-Omair expressed his nation’s need for “Iranian gas through cooperation between the two countries.” However, economic sanctions on Iran represented a major hurdle.

After the signing of the Iranian nuclear deal last year, Iran’s Foreign Minister Mohammad Javad Zarif visited Kuwait, Qatar, and Iraq to assuage regional concerns about Tehran’s foreign policy agenda while promoting deeper Arab-Iranian cooperation in the struggle against violent extremism in the Middle East. However, Kuwaiti-Iranian relations took a downturn in January of this year after Kuwait recalled its ambassador to the Islamic Republic as a gesture of solidarity with Saudi Arabia. The move came after hundreds of Iranians attacked Riyadh’s embassy in Tehran and consulate in Mashhad in response to the kingdom’s execution of Sheikh Nimr al-Nimr.

Yet by only recalling its ambassador to Tehran and not severing relations with Iran (unlike Bahrain, Saudi Arabia, and Sudan), Kuwait appeared to leave the door open for better relations with Iran in the future. As the Saudi-Iran diplomatic spat in January illustrated, Kuwait generally aligns with the Saudis and other GCC states on a host of regional issues (support for Egypt’s post-July 2013 government, opposing Hezbollah, Bahrain’s political/sectarian crisis, the Yemeni Civil War, etc.) and its leaders also call on Arab and Western states to counter the expansion of Iranian influence across the Middle East. However, for years Kuwait City has been more diplomatically engaged with Tehran than some other GCC states, maintaining a relatively normal relationship with Iran.

National Iranian Gas Export Company (NIGEC) officials claim the Iranians and Kuwaitis were in their latest round of gas negotiations in late 2015 (shortly before Kuwait recalled its ambassador to Tehran), which they say continued throughout this year despite Kuwait’s support for Riyadh in January. A managing director at NIGEC remarking on the talks last year said that Kuwait had a “request to buy a high volume” of natural gas from Iran. It appears as though Iran’s interest in exporting its natural gas to more countries in Asia, the Caucuses, and the Middle East may be one factor driving the Kuwaiti leadership to cautiously navigate its options as tensions in Riyadh-Tehran relations exacerbate. The Kuwaiti leadership itself has remained silent over the past ten months on the possibility of ongoing negotiations.

Kuwait’s domestic political and sectarian tensions also enter the equation. The country’s influential Shi’a minority’s overall excellent relationship with the ruling Al Sabah family has largely spared Kuwait of sectarian unrest which has beset and damaged the national fabric of nearby countries. Despite Kuwait’s Sunnis co-existing peacefully with the Shi’a minority since the end of the Gulf War in 1991, recent developments in the Middle East have fueled sectarian tension in Kuwait’s fractious national legislature and raised concerns about the Arab Gulf country’s national cohesion and security. Shi’a parliamentarians criticized Kuwait’s support for Saudi Arabia’s war in Yemen and the Al Khalifa rulers in Bahrain. Consequently, some Shia politicians came under attack from officials in the government and the media for doing so. After Kuwait City sided with Riyadh against Tehran in the Saudi-Iranian diplomatic spat early this year a number of Shi’a parliamentarians alleged that this move promoted anti-Shi’a bigotry amid accusations that Kuwaiti authorities had turned a blind eye to some of their citizens’ financial support for Salafist-Jihadist extremists in Iraq and Syria. A number of Sunni legislators accuse their Shi’a counterparts of loyalty to Iran, whom they claim operate terror cells and spy networks in Kuwait with the intention of overthrowing the government. One of the Kuwaiti parliament’s tribal deputies said that the Islamic Republic has proxies in Kuwait “who use the Kuwaiti identity and the country’s constitution to help Iran” gain influence, while a court sentenced two men—one Kuwaiti, and the other Iranian—to death on charges of belonging to a cell spying for Iran. Tehran denies any links to the cell.

Indeed, politics play out uniquely in Kuwait with various parties representing different ideological and tribal elements in the country’s parliament. Plans to import natural gas from Iran would further complicate Kuwait’s sectarian tensions at a time when a growing number of officials and media pundits in the Arab Gulf state accuse Tehran of aggression against Kuwait and other GCC members. Officials in Kuwait City will have to take into account political risks at the domestic level before pursuing plans to begin importing Iran’s natural gas.

While Kuwait may continue pushing for growing economic cooperation with Iran, it must act within the GCC’s framework and security guidelines. Improving relations with Riyadh’s arch rival will bear implications for Kuwait’s relationship with Saudi Arabia. Deepening economic ties between Iran and Kuwait (as well as other smaller GCC states) would mark a major blow to Saudi Arabia’s efforts to undermine Tehran’s ability to project strategic influence over states on the kingdom’s borders.

With Oman and Qatar engaging post-sanctions Iran, the GCC is split in its approach to the neighboring nation. For now, Kuwait has generally aligned closely with Saudi Arabia’s foreign policy, uniting behind Riyadh in an effort to pushback Iran’s influence. Yet Kuwait is likely to fall in line with Riyadh with a unique approach that caters to Kuwait’s economic health issues amid an era of cheap oil. Plummeting oil prices have altered Kuwait’s fiscal landscape, jeopardizing the Arab Gulf state’s economic growth of the past decade. Earlier this year Kuwaiti oil workers went on strike to protest austerity reforms which they feared would include salary reductions and cuts in longstanding state-provided benefits. Amid growing tumult and geopolitical instability throughout the region, Kuwaiti officials may be cautious in pushing controversial measures due to Kuwait’s relatively freer political environment and the stronger role of unions compared to other Arab Gulf states. Ultimately, these concerns may prompt the Kuwaiti leadership to turn to Iran for natural gas in an effort to counter the negative economic, political, and social impact of low oil prices despite the geo-sectarian and political risks.