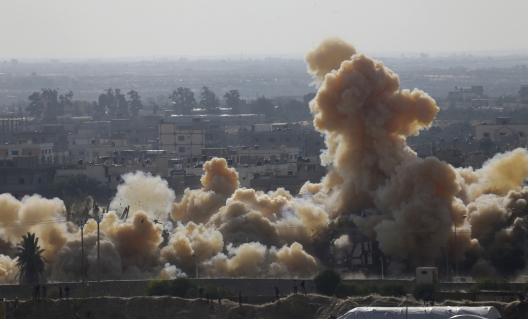 Photo: Smoke rises as a house is blown up during a military operation by Egyptian security forces in the Egyptian city of Rafah, near the border with southern Gaza Strip November 3, 2014. (Reuters)

Following the recent major attacks by militants that killed at least twenty-seven people, mostly soldiers, in Sinai, Egypt’s President Abdel Fattah al-Sisi made two important decisions. He has established a unified military command east of the Suez Canal to fight radical groups in the Sinai Peninsula. He has also pledged $1.3 billion to develop the impoverished peninsula. Both decisions are well overdue. Egypt’s military leadership needs to shift its de-facto mindset from fighting conventional wars and readjust to the evolving reality of a growing insurgency in the Sinai Peninsula. In that context, a particularly important past military intervention is worth remembering____ Nasser’s Vietnam____ or Egypt’s war in Yemen.

More than half a century ago, in 1962, Egypt’s President Gamal Abdel Nasser made a bold decision to send Egyptian troops to Yemen to support the Yemeni Republican coup d’état against the ruling Imam. Yemen’s complex civil war was not a conventional war by any stretch of the imagination. It was essentially a wide counter-insurgency operation that involved fighting many tribes in harsh desert landscapes. In his book, Nasser’s Gamble, author Jesse Ferris describes the challenges that faced the Egyptian military in Yemen:  “The tactical disposition of Egyptian forces was unenviable. The diffusion of forces in small garrisons across the desert or in the mountains rendered Egyptian units ever vulnerable to surprise attacks.” Ferris continued, “The principal military counter-measures were aggressive patrolling and preventative ambushes, neither of which was practiced sufficiently.”

Sound familiar? Ferris’s words can easily be used to describe the evolving reality in Sinai, but with an added urgency. Sinai is not the distant Yemen; failure or even partial success, is not an option.

Initially, the Egyptians arrived in Yemen with Sana’a as their focus. It took them a while to understand that the actual battle was outside Sana’a, in Yemen’s hostile terrain. Similarly, the Egyptian Army’s initial response to rising militancy in Sinai was the mounting of one operation after another to “eradicate sources of terrorism.” The over-confident tone of successive army spokesmen reflects a deep underestimation of the enormity of the task___ just like 1962’s Yemen adventure, in which Nasser aimed for a quick, decisive victory that did not, of course, happen.

Yemen’s war between the royalists and nationalists had gone on for years, draining Egypt militarily and economically. It left the country vulnerable, and arguably, indirectly contributed to Egypt’s defeat by Israel in 1967. In his latest speech, Sisi acknowledged that the battle against Jihadists will be a tough one, a late admission of the bitter reality. Unrealistic expectations can erode public support and help the militants project an image of invincibility.

A new unified military command unit is now under the command of Osama Askar, the previous head of Third Army, who has been promoted to Lieutenant General. Despite the relatively peaceful conditions existing in South Sinai, Askar has a long record of fighting militants in Sinai. The Tahrir Institute for Middle East Policy’s Egypt Security Watch points out that Askar’s troops seized nineteen Grad rocketsm allegedly smuggled into the country by Hamas, and that he orchestrated an operation that killed sixteen militants in February 2014. Some saw Askar’s promotion as a subtle way of punishing the Commander of the Second Army, General Mohamed El Shahat, who was not picked to lead the new unit, despite the fact that North Sinai is directly under his command. Sisi, however, seems careful to avoid any resentment among army cadres, by making the new unit separate from both the Second and Third Armies and appointing a new commander of the Third army, General Mohamed Abdella, instead of keeping it under the command of Askar.  In other words, the new counter-terrorism command will supervise both the Second and Third Armies, instead of replacing them, which may suit army ranks that may be wary of fundamental changes.

However, if a lesson is to be learned from Yemen, the new military command should extend beyond Sinai and the Suez Canal to include the North and West command. In early 1963, Egypt’s army extended its operations to tackle pivotal Yemeni Royalist supply points from the north, such as Najaran in Saudi Arabia, and Harib, near the Omani border. Now, in Egypt there is increasing evidence that Libya has become a new supply route to militants in Sinai. It was also implicated in the shooting down of an Egyptian Air Force helicopter by Sinai’s Islamic militants with a portable surface-to-air missile in January 2014. Moreover, there are now ISIS-affiliated groups in Libya, Sinai, and Gaza, and joint co-operation between the three entities is not unlikely. This evolving new reality needs a robust approach from the leadership in Cairo.

Currently, Egypt’s focus is mainly on creating a buffer zone between Sinai and Gaza to stop the underground tunnels that were built over many years and used by militants to smuggle arms and fighters. Nonetheless, focusing on Gaza and the tunnels is not a wise approach because tunnels are only part of the problem. Egypt has to prevent Sinai from being a storage depot of smuggled arms from Libya and Sudan. Jesse Ferris highlighted in his book that as long as the supply of money and arms from Saudi Arabia [the patron of the Royalists in Yemen’s war] was guaranteed, it would be a matter of months before they regrouped and resumed their insurgency.

Meanwhile, civilians in Sinai continue to suffer. Sisi’s pledge to develop the region is important, but it is a Catch-22 situation for him. There is no security without development, but development is impossible in hostile villages. Again, back to Yemen: in 1962 Egypt established a group dedicated to handling relations with tribes. A similar establishment is needed in Sinai, and it should liaise with Lieutenant General Osama Askar.

It took six years for Republicans backed by Nasser to gain ground in Yemen. Egypt cannot afford six more years of ongoing insurgency in Sinai. The war in Yemen was about Egypt’s regional prestige; the war in Sinai is about Egypt’s survival as a functioning state. The stakes are much higher, however: Sinai is not Yemen. It is much smaller in size and population. The objectives of the counter-insurgency task can be achieved, provided past lessons are heeded.