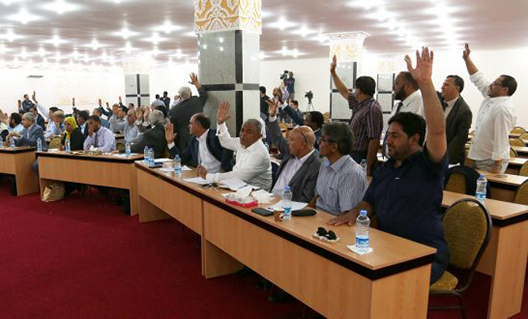 After many failed attempts to meet and reach a quorum, Libya’s House of Representatives (HoR) seated in Tobruk met on August 22 and voted on the cabinet of the Government of National Accord (GNA) proposed by the Presidential Council (PC) led by Fayez Serraj. With the legal quorum of 101 members, 61 members voted no confidence, 39 abstained, and only one voted in favor of Serraj’s cabinet.

On the one hand, the holding of the vote may confirm the HoR’s acceptance of the UN-backed Libyan Political Agreement (LPA) that formed the GNA and the Presidential Council (PC). This was demonstrated by HoR President Agelah Salah’s call for two dissenting members of the PC, Ali al Qatrani and Omar al-Aswad, to end their current boycott of the PC and re-join the Council. On the other, the vote could also reflect Salah’s intent to see to it that the GNA, and probably the whole UN-led political agreement, fails. The vote was intended as a smart and calculated move by those opposed to the GNA, namely Salah, his supporters, and eastern Libya’s strongman General Khalifa Haftar. According to the proper legal procedure, the HoR was supposed to first vote on a constitutional amendment that would approve the LPA and only then vote on the cabinet presented by the PC.  By switching the order of the vote and changing the agenda—HoR members were called in for “consultations,” and there was no mention of voting in the agenda—Agelah Salah played a trick that served his goal of obtaining a no confidence vote. However, the main result of the vote will be a widening of distrust among the HoR members as well as that between the populace and the HoR itself. The vote also showed the lack of responsibility of HoR First Vice President Mohamed Shoaib and of those members who support the GNA. Since the meeting’s agenda did not include any mention of a vote, they decided not to show up in Tobruk, thus making it easier for their opponents to reach their objective.

The latest development came on Wednesday, when the Presidential Council issued a declaration recognizing the HoR’s vote and appeared to accept the assembly’s suggestion to present a new cabinet within ten days.

What happens now? Does the HoR’s vote of rejection mean the complete demise of the UN-led negotiation process that resulted in the LPA? Or simply the end of Serraj’s attempt to form a government? Or are we going to see a repeat of this whole process once a new cabinet is proposed? It is difficult to forecast a clear path for future developments due to the multiple possible scenarios. The international community that has thus far been fully supportive of the LPA and of Serraj’s GNA may take notice of its lack of legitimacy resulting from the HoR’s vote and perhaps call for a new meeting of the members of the political dialogue. This is the group that approved the LPA in Skhirat last December and they may be asked to meet and appoint a new prime minister and cabinet that will be considered by the HoR for ratification. A meeting of the political dialogue group is already scheduled for early September for other reasons, but it could serve this purpose.

Still, while this scenario is possible, it is hardly probable. Setting aside the length of time that the process would take, there is no guarantee that the same actors who selected Serraj can come up with a new name that would suit all sides. Another option would be to ignore the HoR vote on the basis of the irregularity of the convocation. This may give Shoaib and his followers who support the GNA a chance to participate en masse in a new vote that would lead to its ratification. This case has the advantage of salvaging the residual legitimacy of the HoR and preserving the democratic appearance of the political process. However, from a legal perspective, its feasibility is unclear. In any case, it seems that the PC decided not to ignore the HoR vote and on the contrary will follow its suggestion to present a new cabinet.

The PC’s decision today to continue to work with the HoR and present a new cabinet poses two other problems. Accepting the HoR vote would mean accepting that all GNA’s decisions up until now have to be invalidated. The GNA cannot therefore remain as a caretaker government because by definition, according to the HoR vote, it is not a legitimate body. For the HoR at this point, the only legitimate government is that of GNA rival Abdullah al-Thinni, sitting in Bayda. Moreover, accepting the HoR’s vote brings about more obstacles to the tough choices listed above, because there is no guarantee that Salah and his supporters will give up on the maneuvers that up until now prevented a vote from taking place.

Hard choices are looming on the horizon for Libyan as well as international actors, among them the fate of Khalifa Haftar. In a recent interview prior to the vote, Egypt’s President Abdel Fattah al-Sisi reiterated his country’s support for the HoR and for the Libyan National Army (LNA) led by Haftar, despite the fact that Egypt has, along with most of the members of the international community, previously expressed support for the LPA and for Serraj. Haftar himself has refused to recognize the GNA from the start. How does Egypt reconcile these two positions? Egyptian policy has so far been to proclaim its support for a united Libya free from the influence of Islamic radicals whom Egypt considers a security threat; Egypt’s support for Haftar stems from his military campaign to free Libya from all Islamists. Still, Sisi’s declarations of support for the HoR and the LNA serve as a de facto rejection of the GNA. Given the conflict between the HoR and the GNA, Egypt’s support for the HoR cannot realistically translate into support for a unified Libya. Could Egypt be in favor of eastern secession and a breakup of the country?  Many of Agelah’s supporters are indeed “federalists” and would look favorably to such a possibility. What would the position of the United States and its European allies be to such an eventuality? Would they oppose Egypt in a more determinate way?

A solution to the deepening political crisis in Libya is urgently needed. The risk of an all-out war between the forces of Haftar and those that back the GNA, especially the militias of Misrata, each with its own allies and clients, is becoming more and more probable. It is time for a strong mediation whether by the international community or by Libya’s neighboring countries. It is rumored that Libya’s two most powerful neighbors, Algeria and Egypt, are discussing mediation by the Arab League between the main Libyan contenders to find a solution to the political crisis. However, given Egypt’s ambiguous policies on Libyan unity, a preferable outcome would be for the international community, led by the United States, to take the lead in helping the country reach an agreement that would preserve Libya’s national unity and safeguard its nascent democratic process. Strong pressure has to be exercised upon all international actors that interfere in Libyan domestic affairs by supporting this or that faction to withdraw and join the other members of the international community in supporting the GNA despite its flaws and despite the HoR’s recent vote. Accepting the result of the HoR vote, despite its apparent irregularity, and simply abandoning the UN-process that resulted in the GNA, would only serve to further divide the country and plunge the Libya deeper into a political and economic crisis. This looming economic collapse, rampant criminality, lack of basic services, and widespread disorder are all rising factors that need to be addressed immediately before they run out of control and bring Libya to the verge of a humanitarian crisis.

Fadel Lamen is a Nonresident Fellow with the Atlantic Council’s Rafik Hariri Center for the Middle East and chair of the Libyan National Dialogue Committee.