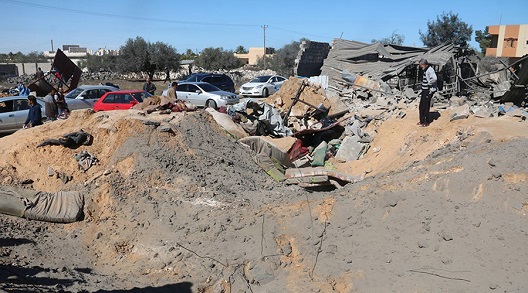 The premise at the base of any armed intervention is to have a clear political aim. An intervention, therefore, must be assessed in terms of modalities and opportunities—an obvious yet often neglected principle. US, Italian, French, and British spokespersons over the last few weeks expressed a desire to intervene in Libya. The two main reasons for this urgency include the lack of a political agreement among Libyans and a fear of growing terrorist activity. Yet world powers need not rush into military intervention without a clear political purpose behind it.

So far, all pressures for Libyan factions to reach an agreement have proved ineffective. The different political actors have yet to converge into a government of national accord and continuously postpone their endorsement of a final cabinet, despite the pace set by the UN Special Envoy Martin Kobler. After the rejection of a 32-minister list, the internationally recognized Tobruk-based parliament, the House of Representatives (HoR), recently extended the deadline to February 23 for a vote endorsing the new 18-member list of potential ministers formulated by Prime Minister-designate Fayez Serraj. Officially, deputies rejected the initial list for being ‘over-crowded’; in reality, tensions erupted over the exclusion of nominees loyal to the influential General Khalifa Haftar. The General exercised his considerable influence on the HoR to reject the proposed makeup.

Western governments also feel the need to respond to increasing terrorist activity after the Paris attacks last November. This attack on European soil has pushed Western powers to pursue military action, lest they appear passive in the face of such aggression. It has also triggered intra-European rivalries. It is important though, that these do not focus on competition over leadership on possible military action, but rather over how to correctly manage the situation. Hasty military actions in 2011 and missteps in post-conflict management in Libya have made European countries, Italy in particular, wary of repeating the same mistakes. Libya’s geographical proximity to Europe and its relevance to Western interests necessitates carefulness in elaborating a new course of action.

Until recently, reaching agreement among Libyan factions was considered a prerequisite to any foreign-led military action in the country. The latest incursions, however, coupled with bellicose declarations by some Western officials, suggest that the West has decided to prioritize its counterterrorism strategy, choosing to bomb the Islamic State (ISIS or ISIL) even without a formal request from a legitimate Libyan government. Clearly the issue is more political than legal.

Armed foreign intervention without the approval, if not the direct request, of a new legitimate Libyan government could jeopardize fragile hopes for peace in a country still struggling to rebuild its political order by encouraging Islamist groups to further coalesce under the ISIS banner. Such attacks increase the scope for potential recruitment and create the opportunity for a new propaganda drive, which could increase the as-yet limited threat ISIS in Libya represents.

Media reports and Libyan fighters often exaggerate the number of ISIS militants. Reliable sources estimate the overall presence of militants in Libya at 3,500-5,000. As other experts point out, the revelations regarding significant reinforcements of Boko Haram must also be taken with a grain of salt. ISIS’s rise in Sirte mirrors its expansion in Iraq, deriving part of its appeal from political marginalization. It is not by chance that Sirte is former dictator Muammar Qaddafi’s hometown and a cradle of the Qaddafa tribe. Since Qaddafi’s fall, the Tripoli-based government has vilified the tribe and other militias accuse it of conspiring with the former regime. As a result, ex-regime’s forces and tribal youth have thus joined the ISIS cause, mostly for political rather than ideological reasons.

Hence, a counterterrorism policy necessitates the return to a political process based on inclusion. Unity government talks do not inspire optimism considering the many hurdles they still face—including General Haftar’s role in a future Libya, persistent hostility to an agreement by armed factions, and obstructionist political forces in Tripolitania with ties to the Islamist president of the Tripoli-based parliament, Nuri Abu Sahmain.

The ultimate goal is the stability of Libya, which can only be accomplished by fostering policies based on nation-building. Both Libyan and international actors play a significant role in shaping this environment. Egypt’s support for General Haftar, for instance, has hindered the successful establishment of a unity government. Egypt sees in him the guarantor of the stability of its borders and the main opponent of Islamist terrorism. Yet, Haftar has not been able to crush the Islamist forces in Cyrenaica. He appears only capable of mobilizing the part of the population that fears extremism (especially in the city of Benghazi) and views all Islamists as potential radicals. Militias in Tripoli and Misrata would reject his inclusion in a new Libyan order, preventing the government from settling in the capital. Without Egypt’s help to find a solution to this issue, Haftar will remain part of the problem.

Failing to outline the political goal of military intervention will contribute to protracted conflict with little political effectiveness, as in the cases of Iraq and Afghanistan. Selective bombings cannot eradicate ISIS in Libya. Since ISIS is an effect of a crisis and not a cause of it, eliminating extremism in Libya necessitates ending the state of anarchy, which requires uniting Libyans in their quest for stability and democracy.

Creating a unified government provides such an opportunity and cannot be ruled out. Western policies—whatever they may be—must maintain this political goal. Military intervention carried out without the Libyan consensus and a shared plan would hamper the negotiations and paralyze government formation. Only after a new unity government forms can the international community draft a military action to support it, creating a secure zone for Libyan political and financial institutions. A coordinated plan with local political and military forces stands the best chance for success, ensuring the safety of policymakers, providing them with the ability to take effective decisions, and isolating spoilers. In this scenario, joint command centers between Libyan military forces against ISIS—as outlined by Wehrey and Lacher—could be possible. Such a solution could guarantee a minimum level of economic governance and an increase in oil exports, delivering “political gains by building confidence and demonstrating that compromise can be mutually beneficial.”

Stabilizing Libya requires greater awareness by the international community of the need to militarily protect the Libyan government and act with it and through it. Unfortunately, in some Western and other regional capitals, the emphasis on rapid, direct attacks against ISIS—rather than on strengthening the Libyan political process—could backfire and negatively affect international security interests. Time favors ISIS, but the international community needs both patience and a political vision, not military aggressiveness.

Karim Mezran is a Senior Fellow at the Atlantic Council’s Rafik Hariri Center for the Middle East focusing on North Africa. Arturo Varvelli is the head of the Terrorism Program at Istituto Studi Politica Internazionale (ISPI). This article was published simultaneously on MENASource and the ISPI website.

Image: Damage at the scene of an airstrike by US warplanes against Islamic State in Sabratha, Libya, in this February 19, 2016 handout picture. (Photo: Sabratha Municipality Media Office/Reuters)