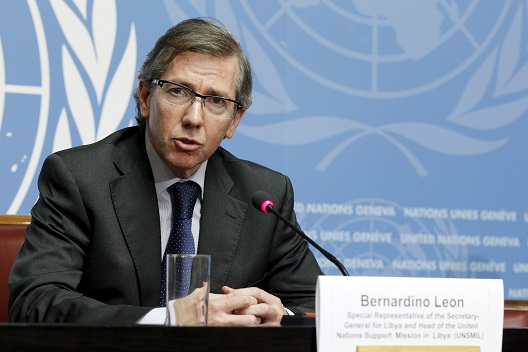 Special Representative of the Secretary-General for Libya and Head of United Nations Support Mission in Libya (UNSMIL) Bernardino Leon arrives at the Palais des Nations in Geneva, August 11, 2015. (Reuters)

The situation in Libya has reached a point of utmost gravity. The suffering of the population and the instability resulting from the actions of rival militias, terrorist groups, and criminal organizations have rendered the situation unsustainable. Libyans are running out of money, time, and patience. The signing of the UN-led peace agreement in Skhirat, Morocco, by most Libyan rival factions marks a positive step toward solving the Libyan crisis in the context of a highly fragmented political and ideological reality.

A series of mistakes made by all components of Libya’s post-2011 political elite has created a situation that has become difficult to untangle. The standard narrative sees two national political poles emerging from the clashes of the summer of 2014. The internationally recognized and self-professed secular, pro-democratic, and Western-oriented House of Representatives (HoR) operating in self-imposed exile in Tobruk represents one pole. The other consists of a coalition of Islamist and non-Islamist militias represented in Tripoli by the General National Congress (GNC). The GNC-affiliated group claims to fight for the success of the revolution against the return of the old regime and for the installation of an Islamic-value based political system.

But this narrative, with its clear distinctions between two polarized but coherent groups, is no longer accurate. The ideological distinctions were only ever partly true at best. What has surely changed in the last few months is the purported cohesion within the two poles. Each has seen within its ranks the emergence of centrifugal forces causing a high degree of fragmentation in advancing policy proposals and reacting to political events.

The Islamist-affiliated Libya Dawn faction has seen within it the emergence of a Steadfastness Front that rejects the idea of negotiations with what they consider their existential enemy: the militias of Zintan and the former General Khalifa Haftar’s Operation Dignity. Although the front consists mainly of Islamist sympathizers, it does not comprise all Islamist militias or Islamist-affiliated political parties in Libya. Many other Islamists favor peace negotiations. Mayor of Tripoli, staunch Islamist, and former rebel commander Mehdi al-Harati signed the recent UN-proposed agreement in Skhirat, as did Mohammed Sawan, leader of the political wing of the Libyan Muslim Brotherhood. In Misrata, host to some of the most powerful militias allied with the Tripoli forces of Operation Dawn, a wide fracture emerged when the majority of Misratan military commanders sided in favor of signing the agreement. In doing so, they took a stance apart from the rejectionist front. Leading intellectual and Islamic thinker Ali Sallabi, some Islamist ex-GNC representatives, and the former Libyan Islamic Fighting Group leader Abdel Hakim Belhadj, among others, constitute an influential group whose members—while sympathetic to some of the positions of the Steadfastness Front—see more use in negotiating particularly disadvantageous parts of the Skhirat agreement rather than rejecting the process completely.

Libya’s international partners can play an important role by engaging with and encouraging this faction to reach out to the rejectionist front in an attempt to bring them back to the negotiation table. Very positive in this respect has been Italian Minister of Foreign Affairs Paolo Gentiloni’s presence in Algiers in support of UN Special Envoy Bernardino Leon’s efforts in convincing members of the GNC to propose amendments to the Skhirat Agreement rather than reject it.

The Tobruk pole also suffers from similar divisions. Rumors abound of illicit pressure by a small ruling minority to sway the larger contingency of voting members, further delegitimizing the HoR. It is unclear how many members of the HoR effectively participate and vote in parliamentary decisions. Even within the militias of the so-called Libyan National Army, disagreement between Commander-in-Chief Khalifa Haftar and some of his subordinates has surfaced, especially among former Qaddafi Libyan Army officers. Tribal and ideological considerations also fragment Tobruk’s cohesion. Different ideological groups have widely divergent visions for Libya’s political future. The Federalists, for example, push for a disaggregated union formed by three largely autonomous regions, versus those who prefer a whole and united Libya.

With a proper understanding of the mercurial, intricate nature of political coalitions and individual political actors in Libya, a few considerations emerge:

1)      Forces exist on either side who see their future only in military success. They view any positive conclusion to the UN-led mediation as an existential threat and stand to lose under any legitimate government. These spoiler groups, including proliferating criminal organizations and terrorist groups, want the demise of the political process, especially if they can blame their opponents.

2)      Fragmentation within the various camps may render it more difficult to reach an agreement on the formation of a Government of National Accord (GNA). The UN and international partners will have to be creative and steadfast in their support for establishing a transparent and inclusive process of selecting candidates for the various positions in the GNA. In this way, they can render moot the conspiracy theories and obstructionism with which the spoilers will support their objections.

3)      Beyond the challenge of forming an inclusive new government, the agreement—even if signed by all relevant participants—cannot produce a security network strong enough to  protect vital installations and guarantee the safety of the members of the new GNA and of ministerial employees in Tripoli.

The painstaking efforts required to assemble a representative GNA will be in vain if the new government disintegrates under attacks from criminal organizations and terrorist groups who oppose its formation. Though hotly contested, talks of a potential UN or NATO peacekeeping force (or, as some prefer to call it, a stabilization force) present an opportunity for Libya’s international partners. On the issue of foreign intervention, hesitation on the part of many Libyan elites has caused some confusion. Despite their support for intervention in private conversations, they show reluctance in public fora for fear of appearing unpatriotic or untrusting in Libyans’ capacity to solve their own problems. Opponents of intervention also cite the risks that peacekeeping troops will encounter in facing terrorist organizations and the presumed hostility of Libyans over foreign involvement.

Looking at precedent, however, most Libyans welcomed foreign intervention against Qaddafi’s dictatorship. There is no reason to expect Libyans, now battered by months of the deprivations of conflict, to oppose troops invited by the new Libyan government to help restore peace and security. Nevertheless, the critics correctly presume that these forces will likely have to fight terrorist organizations entrenched in Libyan territory.

The strength of the Islamic State (ISIS or ISIL) and other radical jihadist groups lies in their most dangerous and militarily effective component: battle-hardened Iraqi, Syrian, and other non-Libyan fighters. But these elements can operate in Libya only insofar as they enjoy the collaboration and support of Libyan militants. The component formed by Sallabi, Belhadj, and other Islamist leaders may play a vital role in this regard. As part of a faction with long-standing ties to many radical Libyan Islamist group leaders, they could convince them to support the GNA by invoking their loyalty to Libyan identity and society. Such a decision would deprive ISIS and the other foreign jihadists of the vital support provided by local fighters and their social networks, rendering ineffective their obstruction to the country’s reconstruction and greatly reducing the threat to a peacekeeping force.

A more fundamental objection arises when assessing the intentions of the countries that would underwrite and organize the military operation. Italy, the United Kingdom, and France seem to be advancing their candidacy for the role. All depends on how serious and determined they are, especially considering the costs of such an operation. The challenges to peacekeeping—consent management, terrorism, international commitment—pose significant obstacles, but without it, Libya would continue along its path toward state failure. The time of dubious paralysis has to end if catastrophe is to be avoided.

It is debatable whether the partial agreement signed in Skhirat is better or worse than no agreement at all, and whether a series of local negotiations are to be preferred to a national negotiation that may not include all of the important actors. Unfortunately, Libya is running out of time, and Libyans are suffering too much to keep fostering the patience some advocate in order to solve the many local issues that are purportedly at the basis of the conflict. Despite the Skhirat agreement’s flaws, it remains the only hope for a possible exit from an unsustainable situation. Efforts should be directed towards making the agreement as inclusive as possible, not only of the Islamist component, but also of former regime sympathizers. Complaining of its lack of inclusiveness—and therefore flunking it—is a blind exercise that leads nowhere, since no one has proposed a viable alternative.

Karim Mezran is a Senior Fellow with the Atlantic Council’s Rafik Hariri Center for the Middle East with a focus on North Africa.